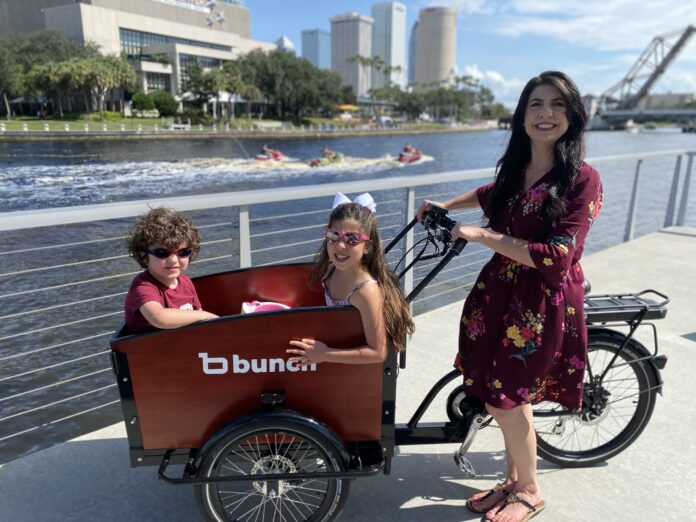 Exploring Tampa on a bike just got a lot easier for my family. We laugh together as we ride to Hyde Park Village, The Riverwalk, Armature Works and Julian B. Lane Riverfront Park. We ride at the same pace. I can see them all the time and no one is left behind. That’s because we are riding together on a Bunch Family Cargo Bike.

This family adventure started when I was driving down a South Tampa street and saw a man pedaling along effortlessly on what looked like a bike with a bucket in the front. In it were two kids strapped in with seat belts. I’ll never forget the contagious smiles on the kids’ faces. My mouth dropped open. I slowly followed them in our car until it was safe enough to ask the magic question, “Where did you get that bike?” Little did I know that soon, I would be answering that same question for others.

You see, I am a mommy who loves family travel. In fact, for the last eight years I’ve used my journalism skills to make videos inspiring families to travel the world with their children. It’s my passion! But 2020 obviously had a different plan for us. I wondered how as a family we could still enjoy exploring new places together in a socially distanced and safe way. I had visions of my kids smiling and laughing too. We couldn’t bike very far if we got individual bikes, since my littlest one is still learning. And, honestly, I hadn’t ridden a bike for an extended length of time in years.

I did my research on Family Cargo Bikes and decided to get a Bunch Bike with electric assist. The Bunch Family Cargo Bike has a wooden cargo box in the front with bench seats facing each other and enough seatbelts to safely seat four children. There’s cargo space underneath the seats for groceries or anything you pick up along the way. It has electric assist which obviously makes it easy to ride. It has 5-levels of speed but trust me, the 48v battery has so much power you probably won’t go past three. Once I ordered the bike from the Texas company, it arrived in a few weeks already assembled and delivered to my front door. It was an investment, but one of the best I’ve ever made. We aren’t spending all our time in the car anymore, because we can use the family cargo bike for small errands too. It will travel 35 miles on a single charge.

This family purchase couldn’t have come at a better time.  The city of Tampa recently announced they received a grant for a major expansion of the Riverwalk which will include new bike lanes stretching to nearby neighborhoods.  And personally, for us it was a life saver. We wanted to explore together again in a safe way and now we are doing it in our own city. So be on the lookout for us as we zoom by you with smiles on our faces. If we are going too fast to answer you, I’ll just tell you now: It’s called a “Bunch Bike.”

The Olympic Games in Paris don't kick off until 2024, but gymnasts all across the country are gearing up in hopes of representing the...
Read more
Family Fun

We hope everyone is having a great new school year! With the weeks being filled back up with schoolwork, we know that the weekends...
Read more