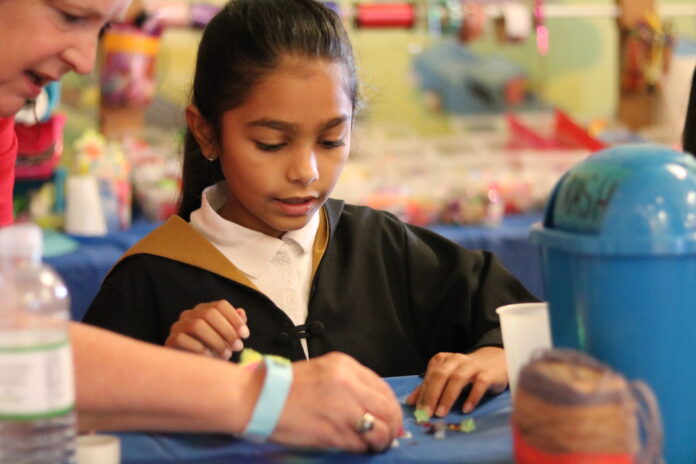 Think back to when you were 6 years old. What was your favorite costume when you played dress up? Did you prefer to play with a tea set instead of a building set? I chose the Cabbage Patch Kid over the Lego set every time, and I did so in my pretty pink princess dress. By society’s standards, I was a “girly” girl. Pink was my favorite color and I wanted to be an actress when I grew up. Pink is still my favorite color, but I never did get my shot at the big screen.

Looking back, I wonder how many of my likes and interests were actually things I enjoyed and how many of them were developed by traditional gender roles? Research shows that gender associations are shaped at an early age and the way children play impacts the development of their social and cognitive skills. For example, toys traditionally marketed to girls, like tea sets and dolls, encourage communication and social skills. Toys marketed to boys, like builder sets and sports, encourage visual and spatial skills as well as complex problem solving, all skills that are important to careers in the STEM field.

A child’s self-perception and decisions about education and career can be affected by gender stereotypes. That is why I’m so excited that the GTE Financial AfterSchool Learning Lab at the Glazer Children’s Museum has partnered with Mercedes Benz and Mattel’s No Limits program to show children, particularly young girls, that they can be anything they want to be. There are no limits. Throughout the month of January, the AfterSchool Learning Lab will host a series of workshops focusing on the accomplishments of women in STEM-related careers. The workshops will build self-esteem, teach participants to think creatively, and introduce them to female role models in science, technology, engineering and mathematics careers. The museum is also reaching out to first grade teachers within Hillsborough County to provide lesson plans aligned to state standards that create teachable moments about female heroes.

Throughout my time at the Glazer’s Children Museum, I have been continually surprised and impressed by the number of girls who choose the pirate or astronaut costume or opt for a science-themed birthday party (complete with awesome science experiments)! I have watched in awe as girls and boys work collaboratively for hours to build a castle with foot-square plastic squares, including doors that actually open and close. Kids these days are cool. They aren’t interested in society’s standards. They play how they want to play, with toys that match their interests. That says a lot about their support systems – the people and organizations that provide opportunities for exploration and discovery.

I can’t help but wonder what careers I might have chosen if 6-year old me had been given a microscope instead of a Cabbage Patch Kid for my birthday. But for the record, I would have been wearing a pink dress when I discovered the cure for cancer.

About the author: Bridgette Riddling is the Out of School Learning Supervisor at the Glazer Children’s Museum and a former intermediate teacher. As a Tampa Bay area native, she loves combining her knowledge and passion for education with the museum’s mission of creating lifelong learners and leaders in her own hometown.

You don't have to be a penny pincher to want to take advantage of a free or cheap deal every now and then. We don't...
Read more
Day Trips