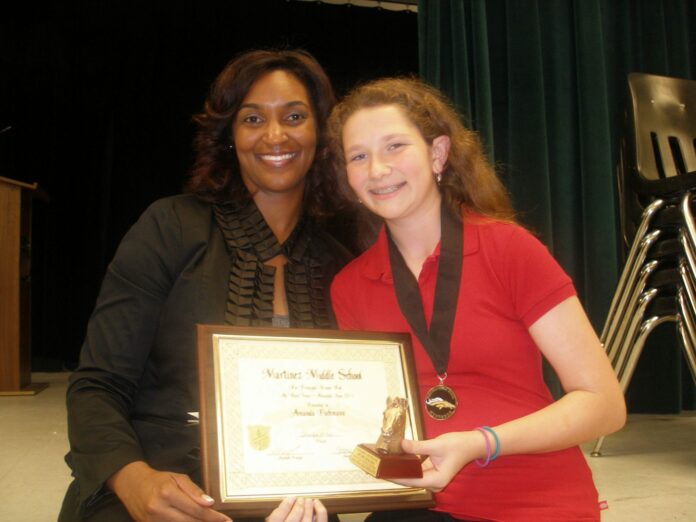 Amanda has been a girl scout since 2003, earning her Bronze Award in 2008 and her Silver in 2011. Her Bronze Award project was to pack up goodie bags to be sent to soldiers in war areas in conjunction with Bob Williams of Support Our Troops. Her Silver Award focused on work in the Village Presbyterian Church Food Pantry in Carrollwood, starting with a food drive and culminating with a cookbook she created containing easy, low cost recipes that used a lot of the items supplied by the food bank.

Amanda has always been a straight A student first at Schwarzkopf Elementary School, and then at Martinez Middle School, earning the “Top Mustang Award” in 8th grade. She was a member of the Math Bowl Team in 3rd to 5th grades and a Math League member and trophy winner in 6th to 8th grade. She was a Duke TIP participant gaining State-level recognition for high scores on the SAT in 7th grade. She played both volleyball and basketball while at Martinez Middle School and a member of National Honor Society, TGAL (Think Globally, Act Locally), and student government. She continues straight A’s in the International Baccalaureate Program at Hillsborough High School. She played JV volleyball this past fall as a starter.

She serves in the nursery at 2 different churches, and participates in church youth group activities serving the community.

As a Girl Scout now, she taught fire building skills and helped run a fire building contest for 4th graders and above in December 2011. She will teach Daisies and Brownies using “edible fire” materials in March 2012. She was the top cookie seller in the Toppercrest Service unit for 2009 and 2010.

In addition to her academic accomplishments, she has a large group of friends at school that she socializes with and assists in their studies when asked.

She is a joy to have as a daughter. She helps around the house, often cooking dinner when I ask because I come home late from work, assists with laundry and cares for her pet rabbits.