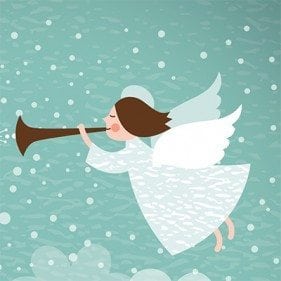 This month, we see more families taking time out of their busy schedules to give back to their community. For some, it’s volunteering a few hours at the food bank or the homeless center. For others, it’s adding a needy child to their shopping list on Black Friday! Experts in child development agree these are priceless lessons for your little ones — lessons in gratitude, empathy and humility! And if you’re like me, you also love this season of giving because it’s ripe with happy surprises!

Five years ago, we got a big one at ABC Action News. Santa walked in to our front lobby! Yes, Santa!

There was no red velvet coat or sleigh in the driveway. He pulled up in a two-door sedan and walked in wearing grey slacks and a white button-down shirt. He took one long look at our Salvation Army Angel Tree and agreed to adopt every last angel on the tree. Each paper angel represents a child and lists one toy and one basic need item on the child’s wish list.

“I was watching Positively Tampa Bay and listening to your plea about the number of angels that were still left on the tree. With only one day to go until the deadline … something told me I had to get involved,” explains Secret Santa. “For years, I have given to some sort of charity around Thanksgiving and Christmas but always felt, for whatever the reason, a little empty afterward. I felt like I was giving to an organization but lost the intimacy of helping that individual person or family.”

That was 2009. He’s done the same thing every year since! Our Secret Santa arrives in our lobby on the last day of Angel Tree to make sure no child goes without.

“The number of angels left on the tree on the last day of the program has ranged from 19 that first year to 50 on the tree last year,” he explains. “The things I’ve bought for the angels have varied widely over the years. One year I bought bicycles and helmets for all of them. Another year I decided that instead of toys I was going to buy them some of their clothing needs. One request really got to me when the parent said their child didn’t have any bed sheets to sleep on at night. They had requested two sets of bedding, which I did without hesitation, and then some.”

It’s a labor of love he and his wife look forward to each year. The couple has spent up to $2,000 on gifts. Asked if they are rich, he quips, “LOL!” That means no.

“It is heart-wrenching to conduct some of the interviews for the Christmas application process and hear the parents ask for diapers, bed sheets, under garments, sweaters and other items that most of us take for granted,” Leisa Hall says. “Through the Angel Tree program, we are able to help meet a parent at the very point of need and make life a little brighter for them and their children.”

The Halls arrived from the Salvation Army in Oklahoma City four years ago, where they also had an Angel Tree program but no Santa! “We’ve never been in a community that had such a generous person associated with the Angel Tree program. He’s one of a kind,” she says.

Our Santa disagrees. “I have been blessed beyond words. I have a great career, family and friends that words can’t fully describe. When I was in the classroom for so many years, I can’t tell you the number of students I had who, on the last day before winter break, were going home to receive nothing for Christmas.

“When I hear the carol Silent Night, I pray that all of the little ones in the world are safe and content. To participate in the Angel Tree Program these past few years has given me that feeling … that Christmas did come true for those kids in some way,” he says, wishing he could do more.

“It doesn’t matter how many angels are selected by someone, it just matters that an angel is selected. Something special happened five years ago when I walked into the ABC Action News lobby right as you were ready to go on-the-air to try and get those last angels adopted,” he says of  the day we first met. “I am convinced that I was drawn there for a reason and five years later, as I prepare for yet another Salvation Army Angel Tree, I know why!”

The Angel Tree is a tradition spanning more than 15 years here at ABC Action New, helping provide gifts for 30,000 needy children in Hillsborough County over the past five years.

“The Angel Tree Program is an opportunity for an individual or a family to connect directly with a child in need. The process is designed to match a donor with a specific child,” says Leisa Hall, explaining the differentiator between Angel Tree and other toy drives.

To find the Salvation Army Angel Tree nearest you, visit www.salvationarmytampa.org. If you’re in west Tampa, home to the ABC Action News studios, come on in! You never know who may be waiting in the lobby!

Lissette Campos is the host of Positively Tampa Bay on ABC Action News and director of community affairs.