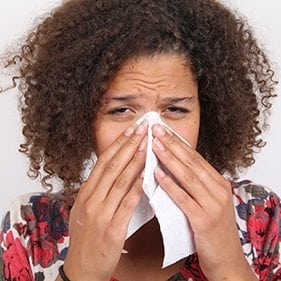 Pollen is in the air, tinting your car windows, finger tips and even your nasal passages in tawny yellow. The pollen sends some into a spiral of sneezing fits or wheezing while others take it in stride. But for a child with asthma, pollen can be a dangerous trigger.

Knowing the difference between allergies and asthma can be one of the most important steps in helping your child feel better. Asthma is a chronic inflammatory condition that affects the airways and often presents in early childhood. It is characterized by recurring symptoms of coughing, wheezing and difficulty breathing

When it comes to asthma, Prpich advises that symptoms of asthma are reversible with treatment.

“Symptoms are caused by inflammation (or swelling) in the airways, constriction of the muscles that wrap around the airways (called bronchoconstriction) and increased mucus that plugs up the airways,” he says. “Asthma severity can change over time and the triggers vary from patient to patient.  Some of the most common triggers for asthma symptoms include viral upper respiratory illnesses, inhaled allergens (like pollen, dust mite and cockroach) and exercise.”

An allergy, on the other hand, is an abnormal reaction by a person’s immune system to what is normally a harmless substance.

Allergies can take the form of nasal congestion, itching, hives, swelling or redness. “As many of us in Florida know, allergies are common and the term ‘allergy’ has become synonymous with any reason for nasal congestion,” Prpich says.

Prpich says that symptoms can vary by the type of allergen as well as the site of exposure. “If somebody is not allergic to that substance, they do not have any symptoms when it is encountered,” he says. “When somebody who is allergic to that particular substance encounters it, their body reacts and releases chemicals inside their body that cause a variety of symptoms. These chemicals include histamine and leukotrienes.” Allergens can be anything from food to pollen, and can also cause eczema, which many children will outgrow.

“Children with food allergy and eczema are at a higher risk of developing further allergies later as well as asthma,” Prpich says.

If you are not sure whether your child has asthma or allergies, being diagnosed by a doctor and getting treatment is paramount. Particularly in children, the correct diagnosis can be challenging and often requires a sub-specialist such as a pediatric pulmonologist or pediatric allergist.

1. The Cost of Asthma and Allergies

“Asthma costs an estimated $3,300 per person each year.  This includes medical expense, missed school and missed work. In 2008, more than half of children who had an asthma attack missed school.  In 2010, asthma was linked to 3,404 deaths,”  Prpich says.  Goals of treatment are two-fold: control current symptoms and reduce future risk (need for oral steroids, ED visits, hospitalizations lung damage and even death). Chronic inflammation may be associated with permanent changes in airway structure. This process has been called airway remodeling. The goal should always be to achieve control with the least amount of medication necessary. If correctly done, the long-term risk of daily medications used to control asthma is much less than the risk of poorly controlled asthma.

2.Control of Asthma and Allergies

“If avoiding or minimizing triggers is possible, this will reduce symptoms greatly. Identifying triggers is very patient specific and starts with what we call a thorough history,” says Prpich. This is the part of the visit spent talking with the physician before the physical exam. In children, this is often the most important part of the first few visits. This will include questions about the child’s environment, the timing of symptoms, and what things have helped (or not helped) in the past. Other tools available include allergy testing, lung function testing, testing respiratory secretions for infection, and, in some children, evaluating their immune system. Correctly identifying a child’s potential triggers will allow focused environmental control measures that may help management.

“This approach is often more effective and cost-efficient than spending a lot of time, effort and money without any guidance or direction,” Prpich says. Treatment of allergies typically includes: avoidance if possible, focused environmental control measures, as-needed antihistamines, and chronic daily therapies such as nasal rinses and medications such as nasal steroids and leukotriene modifiers. In severe patients who do not respond to typical treatments, allergy shots may help, but improvement is not guaranteed.  The treatment of asthma is based on symptom frequency, severity and response to previous medications. There are many inhaled medications that allow us to control inflammation and (if needed) bronchospasm by directly delivering medicine to the lining of the lungs at doses that are a fraction of what is used when taken by mouth.  These inhaled medicines are very effective when taken correctly and on a daily basis. The doses are so low that systemic side effects and risks truly are minimized.

The goal of asthma management is to control current symptoms and minimize future risk. Prpich says: “If done correctly, most children should be able to be active and live a normal life. This includes sports. Exercise and sports can be a trigger for symptoms in some people. But, with correct diagnosis and management, this should not limit a child’s ability to participate, compete and succeed.”

Many successful Olympic and professional athletes have asthma that they have been able to control with the help of their physician.  The key is correctly recognizing the symptoms and seeking help.  The symptom of exercise-induced asthma may be shortness of breath or wheezing, but often, children will develop a persistent, dry cough which starts about ten or15 minutes into the activity.  The symptoms of asthma can vary from patient to patient.  An acute asthma attack typically refers to an acute increase in airway obstruction due to constriction of the muscles that wrap around the airway, an increase in swelling of the airways, and increased mucus plugging up the airways. All of these things contribute to the sensation of difficulty breathing. Some people feel like their chest is tight while others may have coughing spasms. Often, the patient is unable to complete a short sentence without stopping to take a breath. You may see signs of how hard they are working to breathe, including an increased respiratory rate and skin sucking in between their ribs or up by their throat and neck.

“All of these symptoms require prompt attention and the use of the patient’s “rescue medicine” which is Albuterol,” says Prpich. “If symptoms do not improve or if the improvement is short lived, medical attention should be sought.”

4. Who needs to see a subspecialist?

Many children would benefit from seeing a doctor who specializes in seeing children with breathing problems and symptoms affecting the respiratory tract.

Some of these patients include children under the age of 2 with a history of recurrent or chronic cough, nasal congestion or noisy breathing (this can be a particularly challenging age group and symptoms caused by many different conditions overlap);  any child who has been admitted to the hospital or seen in the ED two or more times in a 12-month period for respiratory symptoms;  children or adolescents who have asthma symptoms on a daily, weekly or even monthly basis (especially if already on daily medication);  children requiring more than one course of oral steroids a year for asthma symptoms; children with persistent symptoms or exercise limitation in spite of treatment; and parents who are still questioning the diagnosis of asthma in their child, Prpich says.  “This is by no means an exhaustive list but just an example of some of the patients we often see.”