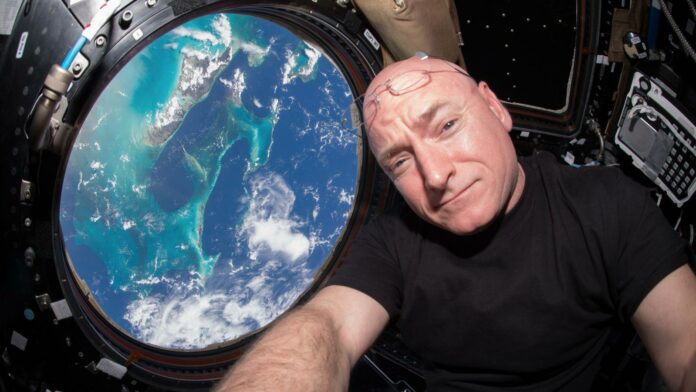 An email sent to Tampa from the International Space Station last month contained an invitation.

Astronaut Scott Kelly was circling 220 miles above the earth and making plans to host a space conference in New York City less than two weeks after returning from his historic Year-In-Space mission.

The email from Kelly invited Professor Antonio Paris, director of space programs at the Museum of Science & Industry in Tampa, to join Kelly at the conference on March 10.

“I was really honored and impressed,” Paris said. “Here he is, near the end of a historic mission to test the limits of what humans can do in space — and he’s organizing a conference for when he comes home!”

Paris will give his unique “Mars 3-D” presentation at the conference, which Paris first presented to guests at MOSI in Tampa. Everyone in the audience gets a pair of red and blue 3-D glasses, and Paris leads them on a 3-D adventure over the terrain of Mars.

During the talk, Paris explains the challenges of sending humans on a voyage to the Red Planet: During the trip through space, bones, muscles, and vision weaken; balance is thrown off; and the extreme isolation may lead to mental health issues.

“This fits perfectly with the Year-In-Space mission Scott Kelly just finished. Many of the experiments and tests he did looked at what a long time in space does to a human’s body and mind. My ‘Mars 3-D’ presentation shows that a mission to Mars means two or three years away from earth, so it’s clear we need to understand everything we can about how people will react,” Paris said.

Paris has researched and written about the ways long-term spaceflight takes a toll on astronauts — and whether people can maintain their health and sanity on future human missions to Mars. One of Paris’ more surprising conclusions: Once a crew from earth lands on Mars, they may have to wait several weeks for their bodies to adjust before taking any historic first steps outside.

“NASA has found out some amazing things already. For example, Scott Kelly was two inches taller at the end of the Year-In-Space mission compared to when he lifted off. That’s because there was no gravity pushing down on his body for 340 days, so his spine had room to spread out,” Paris added. NASA is also studying Kelly’s identical twin brother to learn more.

Antonio Paris is a professor of astronomy at St. Petersburg College and astronaut candidate for a planned private research mission. As director of space programs at MOSI, he oversees content for the Saunders Planetarium, the SkyWatch astronomy and Space Talk lecture programs, and Mission: Moonbase — a NASA-funded interactive simulation of a colony on the moon in the year 2070, located at MOSI.

Paris expects to meet Kelly at the conference and talk with him, at least briefly, about his experiences.

Professor Paris is highly quotable and comfortable with reporters. He is available for phone and in-person interviews, as well as in-studio appearances, on March 8 and 9, and again on Monday, March 14, after his return from New York.