A Heavy Load: Expert weighs in on backpack safety 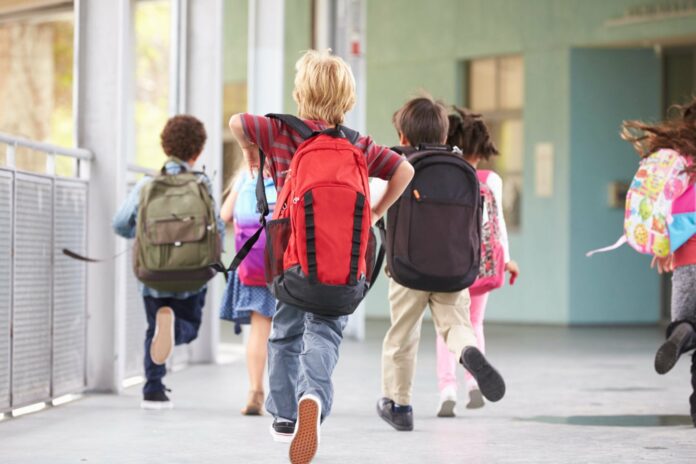 A Heavy Load: Is your child’s backpack too heavy?

With a new school year around the corner, we’ve probably all gone over schedules, planned lunches, stocked up on school supplies and uniforms and made sure our vaccination forms are signed and ready to go. But how many of us think seriously about one issue that could be affecting our kids’ health—the weight of his or her backpack?

Every year, we see our kids bounce happily out of the house at the beginning of the year, only to watch them drag themselves home hunched under a bookbag piled with what looks like every textbook ever published hanging off their slender shoulders. This could be causing real harm, according to Dr. David Siambanes, a pediatric orthopedic surgeon with St. Joseph’s Children’s Hospital.

As a child growing up in Chicago, Siambanes recalls going to school with just a few books because lockers were provided and easy to access. Today, many schools around the country have dispensed with lockers, citing vandalism and safety concerns, and schools are increasingly larger, making it difficult for kids to get to their lockers between classes, he says. In his practice and during research he conducted, Siambanes has noticed that adolescent children do suffer from non-specific and often chronic and recurring back pain, and one Danish study pointed to a 58 percent correlation between carrying heavy backpacks and such pain.

His results? Sixty-four percent of the kids reported back pain with 41 percent of children reporting back pain while carrying their backpacks. Of the children who reported feeling pain, 87 percent of them reported it as bad or very bad, with 16.9 percent had seen a doctor for their pain and 16.1 percent had missed school or sports due to their back pain. Girls were more likely to report back pain, and he thinks this is because girls are further along in the maturity process, making them more susceptible to pain.

Two of the schools he studied had funds allocated to distribute two sets of books to the children so one could be kept at school and one at home, but the policy was rarely enforced, he says. Also, children who walked to school reported more back pain, probably because they spent a longer amount of time carrying a heavy weight.

Is there a magic backpack out there that can help? Unfortunately not, says Siambanes, who has turned down offers from backpack companies to design one because he does not feel that the answer lies in anything other than reducing weight.

What might help is if schools allow rolling backpacks—although then everyone would have to somehow overcome a tween or teen’s disdain for pulling one along behind them. Putting more material online could dispense with the need to lug around textbooks, as could giving out two sets of books, one to keep at home and one to keep at school. Also, if schools take greater care to schedule classes around the location of a child’s locker, that might increase the likelihood of a child using the locker.

As is usually the case, the fix has to come from the home and from parents. In his study, Siambanes found that as much as 30 percent of the items carried inside a child’s backpack was non-school related. Parents should play a role in checking to make sure kids aren’t carrying unnecessary items in their backpack, he says. Make sure backpacks are worn with both straps as close to the body as possible and carry the least amount of weight possible. Parents also can try and carpool more to avoid their children walking for long distances with heavy loads.

*This article is sponsored by St. Joseph’s Children’s Hospital in Tampa. It was originially published in the July 2017 issue of Tampa Bay Parenting Magazine.