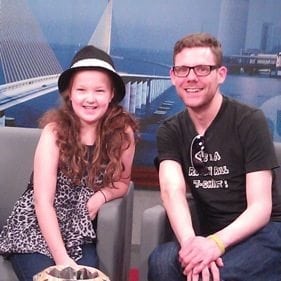 It’s a simple question really, “Are you a match?”

For a young man in Germany, the answer saved the life of a little girl in Sarasota. She was 9, dying and desperate for a bone marrow transplant. Not a single person on the National Bone Marrow Registry was “a match.”

Desperate for a miracle, her mom turned to the international registry. On that list, Kelly Marsh found a 1 in 14 million match! He was a school teacher from Germany.  Five thousand miles away, he agreed to be the match for Hannah. “When I did this, when I was lying there, it was just 4½ hours of my life and a couple of syringes,” said donor Patrick. “It didn’t feel like I was doing something big at all.”

It was a story that Meredyth Censullo and I talked about incessantly for weeks! We counted down to the day when Hannah met her donor at the airport.

“I can’t imagine how it must feel to meet the person who saved your life,” Censullo says. “Many donors never have the opportunity to come face to face with the person whose life they changed forever. It must have been surreal for Patrick to see Hannah.”

I invited the third grader to join me on Positively Tampa Bay and shared daily updates with Censullo in advance of her visit. It was all new to me but for Censullo the bone marrow registry was far from a novelty.  She was on it — had been for 13 years!

“In 1999, while working for a television station in Virginia, I interviewed an elderly man who was trying to raise money for his daughter, Debbie Parker, a married mother of three, who was dying of liver disease,” Censullo explained. “In the story, I mentioned that Parker was eligible for a living liver donor, a then experimental surgery. … Within minutes of my story airing, the station received a call from Ken Schuler, a viewer who wanted to help. He was a longtime blood donor. He was on the National Bone Marrow Registry and had the same rare blood type, B positive, as Parker.

“Within weeks Ken became the first person in the world to donate a portion of his liver to a stranger. When I asked Ken why he made the call to the television station that day he said, ‘If I was standing on the bank of a river and saw someone drowning, I wouldn’t turn and walk away. I’d dive in and help!’ The day I enlisted in the National Bone Marrow Registry it was because of Ken.”

Over the years, Censullo has been a partial match once. Seventy-percent of patients don’t have a matching donor within their family and depend on the registry to survive. “I am still hoping to one day be a bone marrow donor,” Censullo says. Schuler in Virginia was her inspiration for joining the registry. She and Hannah became mine.

Last April, ABC Action News and the Be the Match Foundation launched their inaugural run in the Tampa Bay area, raising nearly $44,000 with dozens of participants taking the added step of enlisting in the National Bone Marrow Registry! This year, the Be the Match Walk/Run has been moved up to March and coincides with our second annual Taking Action for Your Health Campaign on ABC Action News.  We invite you to join us at the race. We’ll be easy to spot, talking a million miles a minute to a little girl with a big dream. Will you be a match for someone? Little Hannah thinks so and so do we. See you there!

Meredyth Censullo and Lissette Campos are part of the ABC Action News team. Visit www.abcactionnews.com for more information on the Taking Action for Your Health Campaign.