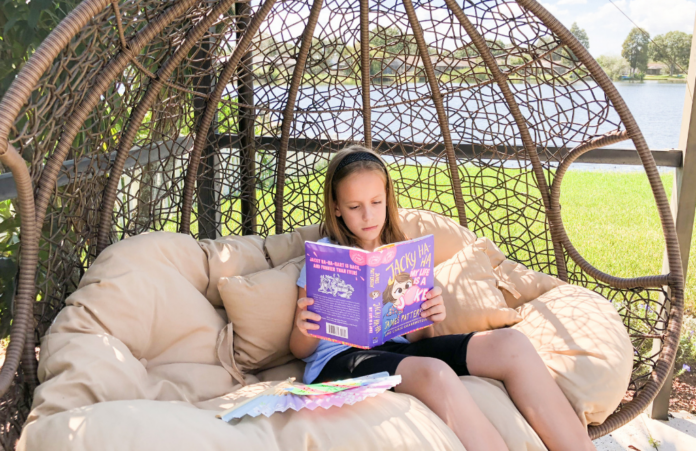 Even in a screen-heavy video game era, books still command attention. If you’d like to find the perfect book to entertain kids of all ages all year long, this list from Corbett Prep students might give you many options. Elementary students in kindergarten through fifth grade share favorite books they think other kids will enjoy.

RELATED: Expert weighs in on why it’s so important to read to your baby

Ricky – “The Giving Tree” by Shel Silverstein. “It makes me feel happy about giving.”

Alexis – “I’m a Unicorn” by Mallory Loehr. “There’s a unicorn and she walks in the dark and she meets her friends.”

Ava – “Amelia Bedelia” by Peggy Parish. “She thinks that if you say to pick up a pen, you pick up a person. She’s funny.”

Shalen – “How Full is Your Bucket?” by Tom Rath and Mary Reckmeyer. “We could help somebody’s bucket get filled.”

Sianna – “Judy Moody: Around the World in 8 1/2 Days” by Megan McDonald. “She’s really brave, she’s extraordinary and amazing and goes on incredible adventures.”

Savannah – The Elephant & Piggie series by Mo Willems. “Because I can read all the words!”

Tej – The Magic Tree House series by Mary Pope Osborne. “My favorite ones are “Dinosaurs Before Dark,” “Summer of the Sea Serpent” and “Good Morning, Gorillas.” Older kids would like them too.”

Kylah – “Camilla the Cupcake Fairy: Best Friends” by Tim Bugbird. “They try to figure out problems, and they are always nice and happy.”

Stella – “Where the Sidewalk Ends” by Shel Silverstein. “There are all these funny poems and funny pictures.”

Charlie – The Diary of a Wimpy Kid series by Jeff Kinney. “I like all of them. He always gets into big problems.”

Izzy – “Nancy Drew Diaries: Curse of the Arctic Star” by Carolyn Keene. “It’s really exciting. It makes you want to read the next chapter.”

Evan – “Wings of Fire” by Tui T. Sutherland. “It’s about dragons and different types of dragons. It’s a lot of action.”

Julia – “Next Best Junior Chef” by Charise Mericle Harper. “It’s like a TV show. I think someone who likes to bake would like it.”

Giselle – “Artemis the Loyal” (Goddess Girls) by Joan Holub and Suzanne Williams. “This book is really inspiring because Artemis wants to make a change. She wants to make a girls-only Olympics.”

Noah – “Hardy Boys Adventures: Into Thin Air” by Franklin W. Dixon. “It’s very interesting. Most of the time there’s something that makes you want to read more.”

Ankita – The Magic Tree House series by Mary Pope Osborne. “I like all of them. They have a lot of facts, and they put the facts in stories. You can learn, and they make it fun.”

Lucas – “Dog Man: Lord of the Fleas” by Dav Pilkey. “They talk about funny and inappropriate things that dogs do. They have weird names and dress weird.”

Sarah – “Remarkable” by Lizzie K. Foley. “I like the girl named Jane and the evil twin. I like adventure.”

Nate – The Warriors series by Erin Hunter. “It’s a book that’s fiction, but it tells how cats would survive on their own. It’s basically like surviving in clans, and it’s a fun-loving child’s book.”

Colin – “I, Q: Independence Hall” by Roland Smith. “It’s a mystery, and you don’t know what happens next.”

Rory – “Alice Through the Looking Glass” by Kari Sutherland. “I like Alice because I like being brave, and she’s brave.”

RELATED: Tampa mom of two shares her secret on how to self-publish a children’s book

Kailani – “Wonderstruck” by Brian Selznick. “It’s two different stories 52 years apart. The girl tells it in pictures, and the boy tells it in words.”

Ryan – “Harry Potter and the Prisoner of Azkaban” by J.K. Rowling. “There’s a lot to relate to, and the characters all have great personalities.”

Elizabeth – “Wonder” by R.J. Palacio. “I liked how different chapters gave the perspectives of the different characters.”

Peyton – The Percy Jackson series by Rick Riordan. “I enjoy Greek mythology. These are really fun and funny. Each chapter is called something really funny.”

Tyler – “Gregor the Overlander” by Suzanne Collins. “There are prophecies. It’s engaging and interesting.”