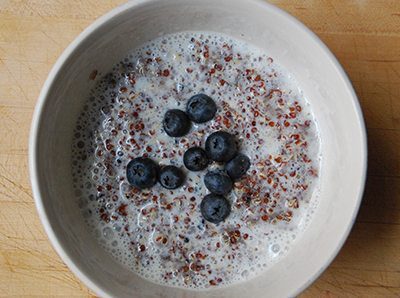 Quinoa has been picking up in popularity as of late. It’s an easy addition to a salad or a side for a nutritious dinner. But quinoa can also be a great breakfast option in lieu of oatmeal. Throw in some fresh fruit and a dash of cinnamon for a yummy start to the day.

Place 1 cup uncooked quinoa in a pot with 2 cups of water and bring to a boil. Once the quinoa is boiling, bring down to a simmer and cover. Let the quinoa cook until all the water has been absorbed, or about 12 minutes. In a bowl pour soy or almond milk over the quinoa. Throw in blueberries and cinnamon.