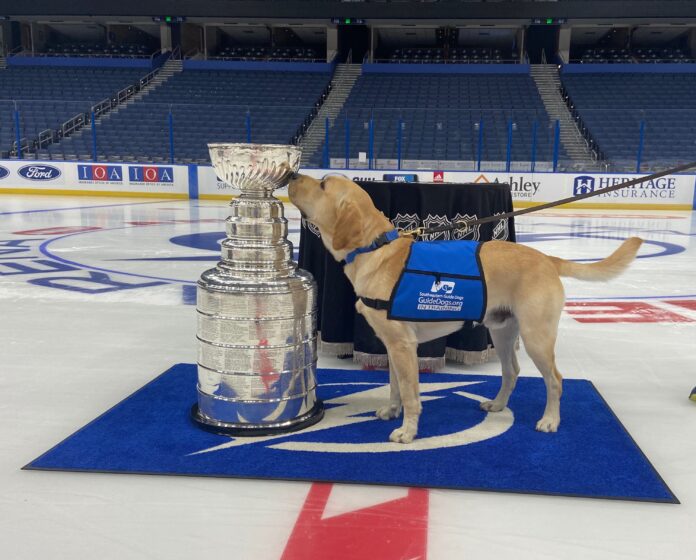 The Tampa Bay Lightning’s team dog, Bolt, recently left for college. Southeastern Guide Dogs Canine University will be the final step before the Labrador retriever begins his career as a service dog. Dogs raised for this noble purpose go through two years of training, including living with a puppy raiser for one year. In Bolt’s case, it was a championship year.

Related: Paws for Literacy at Humane Society of Tampa Bay is a GREAT way for kids to volunteer!

Bolt didn’t know what to make of the Stanley Cup when the Tampa Bay Lightning brought it home last month. “The humans seem very excited about this shiny new water bowl,” his Instagram caption read. The team dog was just happy to see his friends again. They had been gone since August, playing for the Cup at the NHL bubble in way-too-far-away Canada.

“He was happy to welcome them home and receive all of the love from his favorite hockey team,” according to Carrie Talamantes of Southeastern Guide Dogs, a Tampa Bay-based organization that breeds, trains and places service dogs with people who need them.

“Bolt’s favorite part about growing up at the arena was playing on the ice,” Talamantes says.

Bolt taught himself to “skate” like Stamkos and Kucherov and never missed a home game. He grew accustomed to the ubiquitous sights and sounds of Lightning hockey: the ear-splitting goal horn, thunderous organ, dramatic lightning flashes and exuberant fans.

Talamantes says that exposure to the action also taught Bolt to remain “unruffled around large equipment like the Zambonis, calm near the mascot, Thunderbug…, composed for the many ‘people greetings’ he did with fans, and quiet and obedient on TV sets for interviews.”

Several weeks ago, Bolt left the arena and headed back to Southeastern Guide Dogs’ campus to begin rigorous, formal training. Once he graduates, he will be matched with a compatible human partner.

“I used a cane prior to having her, and a cane can’t comfort you, but a dog can,” says Lakewood Ranch resident Rachel Weeks of her guide dog, Plum.

The single mother of two whose hearing and vision are impaired due to a genetic condition was paired with her “adventure buddy” three years ago.

“When I start to stress out in a situation, I just reach down and I know I’m OK, I’m good. I’ve got somebody right here next to me.”

Plum guides Weeks through everything from crossing streets to navigating busy airports. The loyal Lab also accompanies her to work at the Southeastern campus, where Weeks assists fellow service dog recipients, including people with vision loss, veterans with disabilities and children who’ve lost a parent in the military.

“All the veterans that we serve, we haven’t lost one to suicide, which is quite remarkable,” says Weeks.

“There’s a high rate of depression and obesity within the vision-impaired community, and I have found that graduates start riding their bike more or getting out more… They’re healthier and happier since getting their dogs.”

Service dogs work for about 10 years, then live out the rest of their lives as regular pets. When Plum retires, Weeks says she will apply for a successor dog. To her, life without a canine companion is unimaginable.

“It would be very hard. It would not be near as joyous,” she says, tearing up. “It’s really the only way to navigate through life.”

Southeastern Guide Dogs offers its services 100% free of charge to recipients and is entirely funded by private donations. Visit GuideDogs.org to support the organization by becoming a volunteer puppy raiser, hosting a breeder dog, sponsoring a puppy, participating in annual Walkathons or fundraising.

Want to Raise a Puppy?

Being a Southeastern Guide Dogs puppy raiser means sharing your life and home with a puppy-in-training for a little over a year. Providing abundant TLC is the main requirement, but volunteers must also be willing to invest their time and financial resources by committing to training, attending regular meetings and paying for non-veterinary expenses like food, toys and flea control.

We’ve all been there. You start the school year off with a closet full of fresh, new clothes for your child, only to discover...
Read more
Life + Home