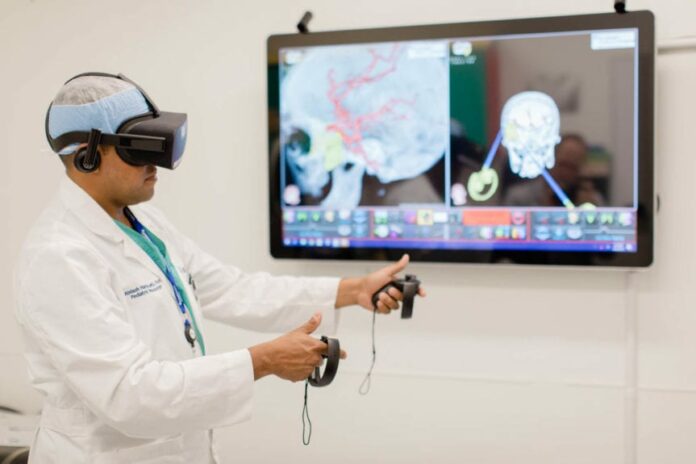 Afton Moore was in class finishing up her last semester of nursing school when she got a phone call no parent ever wants. Her 15-year-old daughter, Arion, had had a seizure at a track meet. Arion had shown no signs of illness before. The healthy, active athlete ran track, swam and played soccer. Within days, however, Moore, her husband and Arion herself were sitting in the office of Dr. Abilash Haridas, chief of pediatric neurosurgery at St. Joseph’s Children’s Hospital.

Floating in front of them was the “enemy,” an abnormal cluster of blood vessels called an AVM, or an arteriovenous malformation.

By using a technology called Surgical Theater Precision Virtual Reality®, Dr. Haridas was able to put a pair of virtual reality goggles on Arion and guide her through a “fly through” of a 360-degree model of her brain to explain her complex condition. She could see the AVM, a dangerous cluster of blood vessels tangled in a knot. Dr. Haridas explained that he’d have to cut some, and that because of their location, there was a risk of damaging part of Arion’s brain that controlled her movement, which could leave her partially paralyzed.

Immediately, the family understood the challenge, as well as the necessity for surgery and the complications involved. It is this educational aspect that appeals to Dr. Haridas.

“Their understanding of what they are up against is very clear at the very beginning,” Dr. Haridas explains. “The communication barrier is broken down—there’s less medical jargon and more meaningful conversation. It helps patients and families assimilate information at a time of extreme stress.”

St. Joseph’s Children’s Hospital is the first children’s hospital in Florida and the only pediatric facility in the Southeast to use the technology in its pediatric neuro and cardiac surgery programs. Using F-16 flight simulator technology, the program finely slices CT and MRI images, then assembles the “slices” to create a 360-degree virtual model of a patient’s own anatomy. With virtual reality headsets, surgeons at St. Joseph’s Children’s Hospital can guide a patient through a 360-degree model of their heart or brain to illustrate the condition, treatment options and potential risks in greater detail than ever before. Rather than a bland set of CT and MRI scans, patients and families can now see their conditions in colorful, vivid 3D.

Although this might seem frightening, most patients like the clarity of information, Dr. Haridas says—especially children. Arion approached the virtual reality with teenage confidence, quickly grasping the need for surgery and asking how soon she would be able to get back to riding roller coasters and playing soccer. Younger kids sometimes have to be coaxed off the headsets because of their excitement at the novelty of flying through their own brains—but they do get a video of their brain “fly-throughs” to take home.

“The children are a part of their treatment plan; there is no shroud of secrecy,” Dr. Haridas says. “Every patient deserves to understand as much as reasonably possible.”

Not only does he use the technology to help patients and families understand their situations, he also is able to use it to plan and strategize the best route for surgery. He spends hours before entering the operating room studying the model from various angles and investigating different approaches into the patient’s brain. Because of the delicacy of the surgeries he performs, this extra reconnaissance ahead of time can provide him with invaluable information and minimize surprises on the operating table.

“AVMs are one of the toughest and most dangerous conditions neurosurgeons face. Having the ability to study an AVM with multiple tools helps me plan a surgical strategy to eradicate the threat this condition poses,” he says.

By using the technology in real time during surgery, he can also ensure that the entire surgical team is on the same page during the surgery and can see exactly what is happening. This additional layer of understanding contributes to better outcomes.

In Arion case, the excellent outcome was a far cry from what could have happened had she not had the seizure that forced them into Dr. Haridas’ office.

“Before we saw the images, we didn’t realize how big it was,” Moore says today. “I was in shock.”

Following her diagnosis in March, Arion underwent surgery in May and spent a total of 11 days in the hospital during and after the surgery. Her biggest complication was the nausea that often results from the brain swelling post-surgery. Says her relieved mother: “If it wasn’t for Dr. Haridas and the technology he used … she probably wouldn’t even be here.” Now fully recovered, the Palm Harbor University sophomore is already back in action on the soccer field.