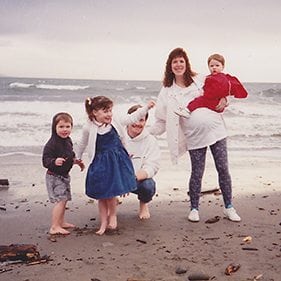 When Ryan Robertson was 12, he was on fire for God.

He prayed and attended church youth groups where he was just one of the guys. He was adventurous and could memorize scripture faster than other kids his age. But Ryan was fighting a battle within that he was afraid to let anybody else find out about. That is, until the night he decided to tell his mother.

“Well, I don’t know how to say this really but, well…… i can’t keep lying to you about myself. I have been hiding this for too long and i sorta have to tell u now. By now u probably have an idea of what i am about to say,” Ryan typed on AOL Instant Messenger from his computer in his bedroom. “I am gay. I can’t believe I just told you.”

Ryan’s parents, Linda and Rob Robertson, were shocked. The Robertson family was active in their church community. They had neighbors and friends who were gay, but to have a son who was gay felt like an attack on their spirituality.

“At the time, we felt like our son was walking in the middle of a busy highway. All of the things we had heard for years and years had terrified us,” says Linda. “The story of gay that we had heard was that gay men were reckless and wild and of course they don’t believe in Jesus Christ. We were very aware that it would be unacceptable to be supportive of a gay son.”

Linda sought help from friends and family, but all she found was her fears being echoed. After researching and dealing with their collective anger and emotions, the family decided to pursue the “ex-gay” route. This entailed Ryan praying, seeking God, reading literature and trying therapy to help him become straight.

“In that time, he became so passionate for Christ,” says Linda. “We did everything we thought we were supposed to do. We thought it was God promising to make him straight, but it was just the church.”

The Robertson family’s story ended tragically . Today, Ryan could have been planning a party for his upcoming 27th birthday, or standing in a tailored tux as his little brother got married. But, as he changed from a terrified 12 year old boy into a hurt and broken 18 year old man, he became addicted to drugs and followed a much more dangerous path than the Robertson’s could have ever imagined. Ryan spent 17 days in the hospital before passing away in June of 2009.

When Justin Lee was growing up in a Southern Baptist church, people called him “God Boy.” But like Ryan, he was also hiding from an important part of himself.

“People want to think that there couldn’t be a gay person in their youth group, or in their congregation, but the fact is that we are in church and we are struggling with ourselves,” says Lee.

After years of studying scripture and feeling like he had nobody to connect with, Lee started the Gay Christian Network (GCN), where parents, teens and gay Christians can connect and find support in a faith-centered community. What started as a message board has now transformed into conferences and various ways to connect with other gay Christians.

“There are members of our groups and other religious groups who oppose same-sex marriage and same-sex sexual relationships,” says Lee. “My advice to those is that there are groups who support gay Christians and others in living a life that is consistent with their theological beliefs without suggesting that they’re no longer gay.”

Groups like Lee’s seek to undo the damage they perceive has been done by “ex-gay” ministries such as Exodus International that use various methods of therapy (including reparative and conversion therapy) to “cure” homosexuality. Many ministries, including Exodus Ministries, have shut down operations. Their methods have been proven to not only not work, but to cause psychological and emotional harm to participants. As was the case with Ryan, participants in this program begin to believe that God has abandoned them when it doesn’t work, and the damage can be irreparable, says Linda.

“This is a part of their identity and who they are, so to reject a teen or someone going through an identity crisis can have long lasting results,” says Nekeshia Hammond, PsyD, owner of Hammond Psychology.

A recent study published by the Psychiatric Times shows that there is a link between kids revealing their sexual identity to their parents (regardless of religious beliefs) and overall happiness. The same study also shows that kids who are not accepted by family members after revealing sexual identity have a higher risk of long-term negative effects and self-esteem issues.

“When teens are coming out, there is an increase in their anxiety. Teens who are not supported by their family or their community can have a lower self-esteem and this can really have long-term results that stick with them,” says Hammond. “When you reject a teen coming out, it can even push them toward suicide.”

Feeling as though God had abandoned him, an 18-year-old Ryan began walking down a much more dangerous path: drugs. He moved out of the family home and became addicted to drugs and living a dangerous lifestyle. He began breaking into his family home to steal and pawn family members’ belongings, and he grew further away from his family and from God.

After trying fervently to become straight, the results were not what the Robertsons had hoped for. Ryan felt like God had given up on him, and he became hopeless. Linda and Rob felt that Ryan still shouldn’t pursue a gay lifestyle, not realizing the pain this would cause.

“I have been so blessed with a wonderful marriage, and at the time we never realized that we were telling our child that he can never have what we all have,” says Linda.

“If I could go back, I would say to him, ‘We’re in your corner, we have your back.’ We had – unintentionally – taught Ryan to hate his sexuality. And since sexuality cannot be separated from the self, we had taught Ryan to hate himself. So as he began to use drugs, he did so with a recklessness and a lack of caution for his own safety that was alarming to everyone who knew him. We feel like we have responsibility for his decision to use drugs,” Linda says through tears.

Again and again, advocates counsel that if your teen decides to reveal his or her sexual identity, one of the most important things you can do is listen—regardless of your beliefs.

“Listen, express love, have an open dialogue with them, and commit to remain open and to explore together what this means for their life,” says Lee.

Another important thing to do, even if you don’t think that your child is LGBTQ, is to watch the things that you say when they are young.

“You never know if by saying things like ‘Oh look, Ellen is a lesbian. Gross,’ or something like that, [you might] affect your child. You don’t know what they might be struggling with, and those types of comments might make it harder for them to want to be open with you,” says Linda.

Although your religious beliefs may not support same-sex relationships, it is important to get educated and find support for yourself and your teen. One resource is through an annual conference that GCN holds where teens and their parents can connect with each other and learn scripture as well as find support.

When Lee came out to his parents, he confided in a pastor whom he trusted fully before coming out to his parents. Although the pastor didn’t support homosexuality, he was able to help Lee build the courage he needed to tell his family and was able to provide a level of support that Lee needed.

The issue of your child’s sexuality isn’t black and white, Linda warns. “There is a credible scriptural defense that God can bless gay marriages, and your child may have been struggling and studying scripture far more than you might have,” says Linda. “It is so important to listen, and to realize that if you jump to giving advice on something they have struggled with for months, it can drive a wedge in the family.”

After Lee came out to his family, he realized that he was one of the lucky ones. His parents listened and recognized how hard it was for him to tell them what he knew they didn’t want to hear. They expressed their love for him, and although the years wouldn’t be without a heated conversation or two, they supported him. Because of this support, Lee knew that his call to ministry might have been different from his original plans, but was something he could use to help others.

If your teen has revealed their sexual identity and relationships were damaged in the aftermath, counseling can be an important step, says Hammond. After struggling with his sexuality and Christianity for years, just 10 months before his death, Ryan was ready to start over. The Robertsons went to therapy with Ryan and things began to improve.

“That time was just such a blessing,” says Linda.

Just as you sought support when your child initially revealed their sexual identity to you, it is important to seek support when the relationships were damaged, says Hammond

“Before you start counseling, really talk and listen to what each member of your family has to say,” says Hammond. “The next step to mending the relationships is to come to counseling and work through it together.”

Although the Robertson family loved their son fiercely and tried to mend the damage, Ryan relapsed and Linda received a phone call that shocked her. She needed to come to the hospital to identify her son.

“Ryan died on July 16, 2009. And we lost the ability to love our gay son…because we no longer had a gay son. What we had wished for…prayed for…hoped for…that we would NOT have a gay son, came true. But not at all in the way we used to envision,” says Linda.

While the Robertson family story had a heartbreaking end, teens are still coming out in conservative or religious families today, and there can still be hope.

“Parents don’t want their kids to walk away from Jesus because of their sexuality, but then the opposite of our fears happens,” says Linda. “When we don’t listen and support them [our kids], we push them right into the fire ourselves.”