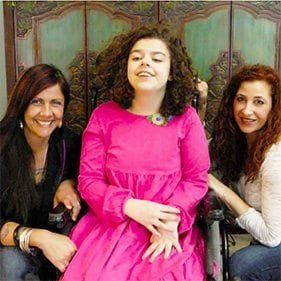 She could have been running with her sisters, kicking a soccer ball and laughing.

She could have been teaching her little sister how to apply lipstick and how to shave her legs.

She could have been getting ready for her high school homecoming dance with friends.

Instead, 14-year-old Chelsea Forant is learning how to walk, and a few years ago, mastered feeding herself and washing her face. She loves to sing, belting Bruno Mars and Adele songs. She can beautifully croon Amazing Grace, fully understanding the words “I once was blind, but now I see”.

On Feb. 14, 2001, Chelsea’s mother Shannon Byron left for work, kissing her sweet daughter on the head as she left. Around noon, Byron returned home, where her husband had been watching the children. Chelsea’s father rushed outside, crying and shouting because Chelsea had stopped breathing.

Chelsea was rushed to the hospital, where Byron watched as doctors put a large needle through her tiny baby’s skull. Byron thought her child was dead, so she began to pray.

Chelsea was diagnosed with Shaken Baby Syndrome (SBS), which her father admitted to causing. In a moment of frustration, her father had shaken her, causing Chelsea’s life to forever change. Even more than that: Her whole family’s lives were changed—from her mother to her sisters, one of whom who wasn’t even born yet.
“I think a lot of people have a lot of anger about what happened,” says Byron. “But Chelsea is the happiest kid in the world. That is all I could ever ask for.”

The truth is, Chelsea is lucky to be alive. One in four babies that is shaken violently dies, according to the Centers for Disease Control and Prevention (CDC). Because so many cases of SBS are underreported or never diagnosed, it is hard to know the exact number of children affected each year, but the CDC estimates that as many as four children experience severe or fatal head trauma each day. Head trauma can be caused by shaking a child, which is more likely in a young child as their brain and skull are still growing and developing.

The signs of a shaken baby can range from a lack of normal responsiveness to a small or squishy bulge on the child’s head. The child also may seem lethargic or more tired after being shaken. If you suspect that your child has been shaken, Kelley Parris, executive director of The Children’s Board of Hillsborough County, urges you to seek medical attention right away.

“We see a lot of times that caregivers will shake a child when they become frustrated,” says Parris. “When the baby starts to cry it can be overwhelming and you lose control.”

The Children’s Board of Hillsborough County has started a campaign to raise awareness to put an end to preventable deaths and injuries, including SBS. Their hope is that with education and prevention techniques, caregivers will be less likely to accidentally harm a child.

So often, people jump to conclusions that a person who would shake a baby is easy to spot. But, a person who shakes a baby looks just like everyone else. Many times, they don’t mean to harm their child but simply lose control in a moment, warns Parris.

This was true of Byron’s husband. “People look at him and they would never know what he did. He loved Chelsea and he still loves her, but he made a huge mistake,” says Byron.

Preventing your baby from being shaken by a caregiver can come from awareness and education. “Try to find someone who has taken classes and is certified in child care,” urged Parris. “Even if you are in a pinch looking for child care, no pinch is big enough to leave your child with someone you don’t trust.”

Parents looking for dependable child care or even just to take a class themselves can find great resources at the Red Cross as well as St. Joseph’s Hospital, Parris recommends. “We just need to do everything we can to keep children in safe hands,” she says. The Children’s Board Family Resource Centers are also a great place to find help.

However, Parris warns that just because a person is certified does not mean they will not lose control. “Make sure that they know and understand that crying won’t hurt the baby. If you start to feel frustrated, put the baby in their crib and walk away for a few minutes until you have calmed your nerves,” Parris says.

“We see a lot, especially with young parents, of people just not knowing what to do if a baby doesn’t stop crying,” says Cindy Franciosa, co-founder of Stop Shaken Baby Syndrome Inc. “We also see young parents leaving their kids with practical strangers– finding babysitters through Craigslist or Facebook. But you have to remember, nobody is going to love your child like you do. Make sure your sitter is patient with crying children.”

It is also important to remember that children will cry during certain stages of life more than others. For example, potty training can be a difficult time. “It is often when a person is inexperienced and impatient that shaking occurs, so educate yourself on why the child might be crying,” says Parris.

After Chelsea was shaken, Byron felt alone and wanted to not only find support, but to spread awareness and support others. She reached out to Franciosa, a mother who had never had a shaken child but felt passionately about spreading awareness. Together, they founded Stop Shaken Baby Syndrome Inc., a foundation with the goal of reaching and teaching new parents and caregivers around the country.

Part of the work that Franciosa and Byron do is to spread education through schools and hospitals. One of the main speakers on their team is Chelsea’s father. “We always have him speak and wait until the end to tell what he did. A lot of people are angry after they know who he is. A lot of people get upset. But it really shows them that it could be anybody– even this well dressed business man– who shakes a baby,” says Franciosa.

While the loss that Chelsea suffered has been great, the impact on her family has caused a ripple effect of heartache. Chelsea’s older sister harbors anger and resentment in ways that normal teens don’t have to. She can’t experience the normal sibling irritation without an extra dose of guilt, feeling angry at herself for being angry at her sister when she does something that annoys her. Chelsea’s younger sister has had to sacrifice the extra time with her mother as she has to take Chelsea to her appointments.

Byron is a single mom and between working and taking care of Chelsea, the days can seem endless. “Sometimes I just have to wake up and cry, but then I have to keep going. Every little thing I do right now affects Chelsea.”

Byron also has to experience the types of fears foreign to most parents. She worries what would happen to Chelsea if she were to die. Who would take care of her? Will Chelsea ever marry? What types of things will she have to miss out on? Was she alone in these fears?

The days that her fears plague her the worst are the days that Byron has to remember to put her life into perspective. “I always tell myself that even though this is hard, someone else has it harder,” she says.

While time is said to heal wounds, the wounds inflicted on Byron’s family may never fully heal. Byron has found consolation in one truth that gets her through each day.

“You are not alone in this,” Byron says. “If your baby has been shaken, you are not alone. You might feel incredibly alone some days, but together we can stop this.”