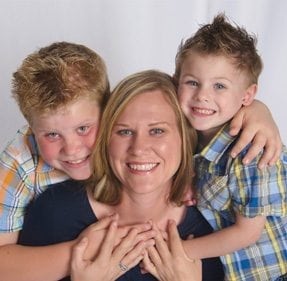 I lost my husband two years ago, and my two sons lost their father. Being a widow is hard, but being a mother to children who lost their father is even harder. As parents, we can get through most things with ease and hope we did not damage our children too much. But what do you do when you cannot bring their father back?

After my husband’s death, I saw my children cry, and I could not kiss their wound to make it immediately better. I heard their whimpers down the hallway during the night and did not know what to do. I was lost myself, so how could I help them?

It’s amazing how your parental instincts kick in, even if in the back of your mind, you do not have the confidence you once had. I learned a few things during that time and want to share them with you.

Take time for yourself. This one might be challenging. You want to comfort and pour all of your efforts into your children, but you need to realize that if you do not begin to heal, you will not be able to help your children. I had people ask to help me after my husband’s death. I swallowed my pride and asked them to play with my children when I needed a break.

Cry with your children. I thought I needed to be strong in front of my children. That they could not see me falling apart or they would worry. The truth is it made them believe it was not okay to cry. When my oldest son told me that, I began to cry with them. We cried a lot together, and it felt good.

If your child is young, he might be stuck in a stage because of the trauma. My youngest was 2 when his father died. I thought that he would not remember. When I took my children to a counselor, she confirmed that he might be stuck in a phase. She said young children can stop maturing in certain areas because their maturity might halt during their grieving period. I realized I needed to lower some of my expectations until he was ready.

Let your children know they are victims, but make sure they don’t use it as a crutch. My children are victims because a person decided to get behind the wheel of a truck when she was intoxicated. It was hard for me not to feel sorry for them. I wanted to give them what they wanted and began to spoil them a lot too much. They did not need me to give them things. They needed me to be the Mom that I am. Toys and cookies were not going to fill their void. Being an only parent is challenging. It is hard to find the balance, but you do. I brought back the structure and rules that they need to become self-sufficient adults.

Be open and honest. I tried to shelter my children until they began asking me questions. Then I knew they needed the facts just as much as I did. I do not give them all the specifics, but they know what has helped them heal. When they get old enough, I have kept everything and plan on giving it to them if they ever ask.

Don’t pressure them to talk, but be there when they are ready. I would often pressure my children to tell me what they were feeling and it made them bottle it up even more. I learned to tell them I was there when they were ready.

Children will grieve differently than you. I was so naive to think my children would grieve the same way I did. They would often use play to work out their feelings. I would watch my youngest play with the truck replica that my husband was driving. He would reenact the scene of the crash. I was horrified but it was his way of working through it. There were times when they would be playing and laughing and I could not understand why they would not be feeling as miserable as I was. I embraced my children’s grieving process, and it helped me too. I was able to be lost in their world for awhile and be silly with them. Your children can teach you too.

Don’t let others tell you what’s right for your kids. It can be hard because of the emotional rollercoaster you are on, but you can still say no, no matter who is giving the advice.

Reminisce with your children. The big smiles I see on their faces when I tell them they are doing something their father used to do warms my heart. They often remember things that surprise me. Like my youngest remembers the way his dad would juggle cuties (oranges) for him. It is fun to talk and laugh about those memories.

Confirm their thoughts. For many months and almost on a daily basis my youngest would ask, “Daddy’s dead, right? He was killed by the lady that drank too much beer.” Those words were almost too much for me to bear at the time. I always had to swallow hard and tell him he was right. There was something about repeating that out loud that confirmed his father’s death for him.

Start a feelings journal. I had my oldest put all of his thoughts on paper. He was able to understand or rationalize why he was feeling a certain way. He was able to cope a little better. I know we should not invade our children’s privacy, but I would peak in it once in a while to see how he was doing.

Get a punching bag. Anger. It is such a negative emotion that comes out of trauma. It is really hard to see the innocence of your child be replaced with anger. It is so powerful and can take over. So I bought a punching bag that I placed in a back room. When they felt the anger or I would see it coming, I would put them in the room. They would hit, kick and punch the bag until they had no energy left. They would also punch their pillow or scream into it. Any soft surface will work, and this is the most positive way they can release the feeling.

Release balloons. On my husband’s birthday, my children pick out balloons for him. We write notes and tell daddy how we are doing. We have included pictures for daddy to keep in his house in heaven. This is a tradition we enjoy.

I encourage parents to take their children to a counselor. I know there is debate about whether this works, but it worked for us. My children are healthy and strong. They have experienced a tragic loss but they still have their father in their lives. It might not be in a traditional sense, but it is our life now.