Devil Made Me Do It 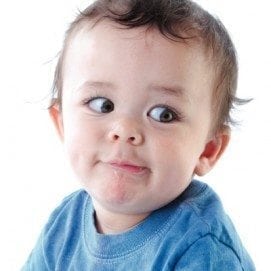 My wife and I have often joked that we think our youngest son is the devil.

He creates chaos everywhere he goes — walking from one end of the house to the other, tossing toys wherever he pleases, climbing the counters and emptying our glasses from their cabinets, sneaking into the bathroom and throwing our toothbrushes into the toilet, sleeping an average of three hours a night, yet never tiring, slipping Visine into my beer and hiding the toilet paper.

If I didn’t have a grounded sense of my own self worth, I would believe that that my 2-year-old son was the Antichrist, but there is no way I am important enough to claim the historic distinction of fathering evil incarnate. However, while my youngest son may not be the ultimate evil, he may be a close second.

On June 1, we finally had him baptized. On that same day, we learned that our assessment of him as the devil is 100 percent true; he was possessed. His baptism turned into an exorcism.

Every baptism has that one nightmare of a kid, the baby who yells and screams the entire time, thus ruining the occasion for the other families. That was my son.

He was everywhere! In typical fashion, he refused to be held, running throughout the church during the short service, climbing over and under pews as I was in hot pursuit and tossing books over his head to slow me down like the bad guy in the old Spy Hunter video game would dispense oil slicks. When I would finally get hold of him, he’d quickly wiggle from my arms again. He even managed to break a few of the prayer candles. In a scramble, I hid the evidence, perhaps sealing my fate of afterlife in hell. But at least I’ll have my evil son to keep me company.

In order for him to be baptized, I had to try to get him to remain still for just a few moments, which meant I had to bear hug him with both arms as he squirmed and yelled. It was embarrassing. No one wants to have that child. But I did.

Then he made up for all of his terrible behavior by turning his baptism into one of the most memorable and hilarious in the history of the Roman Catholic Church. As the priest slowly strolled toward my son, who was howling so angrily over being restrained that he sounded like Dustin Hoffman’s character during the torture scene of The Marathon Man, he began screaming no and flinching away from the priest.

The priest was doing everything he could to keep a straight face. Then, when the priest doused my son with holy water, he shrieked, “Dada, it hurts,” as though it was burning the skin off his flesh. The priest actually lost it, covering his mouth to stifle his laughs. When my son repeated this act as the holy oil was rubbed on his head, the priest smiled and said, “I think this child needs a little more,” and doused him a second time.

Adding fuel to the belief that my son was possessed and the baptism exorcised the demon – moments after the ceremony ended, he calmed down! He stopped wiggling so we could take family photos. He took a long nap, sleeping so soundly that we were able to transfer him from his car seat to his stroller and into a restaurant. When he did wake, he sat pleasantly in his booster chair and ate his meal, never once screaming to be taken from his chair so he could race around the restaurant as he normally would.

Just in case any of this doesn’t seem completely unbelievable, here is the kicker. When we returned home, my son picked up the television remote control, turned on a Christian rock music channel and began to dance! I wish I was making this up. It happened. My son really did have the devil in him!

Unfortunately, it seems the exorcism was only temporary. After I bathed him, washing away the holy water and oil, the devil reentered his body. As I sat in the living room and played with who I thought was my new angelic son, he picked up a block, slammed it into my face and laughed at me. We should never have bathed him.

Oh well, we tried. I guess Darth Vader was right. You cannot underestimate the power of the dark side.

There is evil in my son.

For more unbelievable but true stories about Paul Guzzo’s children, check out his book The Overnight Family Man, now available on Amazon.com.