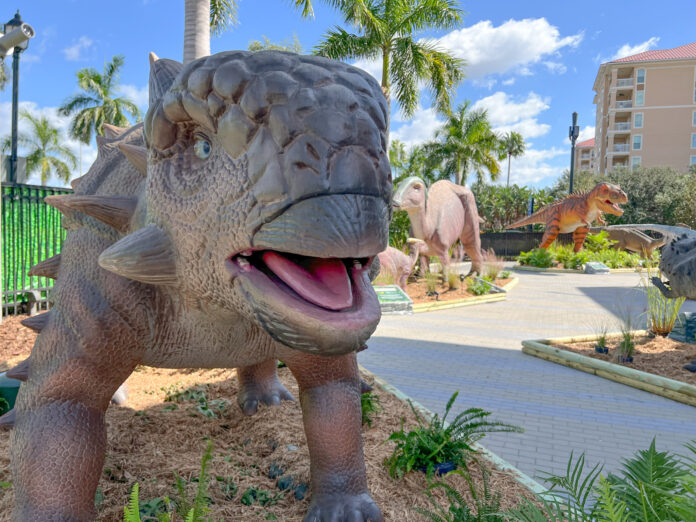 Get ready to step back into time…by a few hundred million years and walk among the dinosaurs!

Dino Don’s DinoVenture opened Saturday, October 23 at The Bishop Museum of Science and Nature  and will be on display through March 18, 2022. The outdoor exhibit is new to the museum, but has been on tour of major zoos and museums across the country and what makes it so unique and sets it apart from other tours is that its creator, Dino Don (aka Don Lessem) was adamant his robotic dinosaurs were as true to the real dinosaurs as possible.

“We actually sent scientists to the factory and they stand over the guys and gals who were carving to make sure these come out accurately, so it’s sort of the next step up in accuracy and robotics. I don’t know what’s beyond this, but I would love to make them alive again,” Lessem smiled.

There are 20+ robotic dinosaurs and dinosaur skeleton models on display right now at the museum with more expected to be rotated throughout the duration of the exhibit with runs through March 2022.

To understand what you are about to experience when you attend the DinoVenture exhibit, it’s good to get to know the man who created it.

Don Lessem is a legit dinosaur expert. He’s written more than 50 books and has several decades of dinosaur research under his belt. But, what really irked him was that we weren’t always getting it right when it came to dinosaurs, so he set out to change that by building robotic dinosaur exhibits so people of all ages can come face to snout with the most accurate looking dinosaurs science of today allows.

And when you walk through this outdoor exhibit, you might be surprised at the true size of some of the dinosaurs we’ve come to love over the years.

Among his other claim to fames, Lessem was also a science advisor on the Jurassic Park film. Yes, while it’s a movie that has sparked a love of dinosaurs among many, the film’s creators didn’t always get it right. He says he tried to correct the inaccuracies, but you know, Hollywood.

Remember the scene when the kids were chased around the kitchen by a pack of velociraptors? While scientists like Lessem believe the dinosaurs did hunt in packs, the movie upsized them….by a lot.

“The reason they were upsized in the movie by the way is –it isn’t just projection like CGI and robotics that made these dinosaurs -that was most of it, but you can’t put a dinosaur hopping up on the kitchen counter like in the movie, so you need somebody in a dinosaur suit like the guys who played Ninja Turtles and they had to be sewn into a suit, so therefore velociraptor got to be my size. There are bigger dinosaurs that are related to raptors, so Deinonychus should have been the bad guy in the movie, he just didn’t’ have the right agent.”

You can see both the Velociraptor and its larger relative, the Deinonychus, at the DinoVenture exhibit at The Bishop where Lessem is hoping to set the record straight.

But, the velociraptor isn’t the only dinosaur that got a Hollywood touch up. Lessem walked us over to another dinosaur near the entrance of the exhibit.

“The little spitter doesn’t look like a little spitter in real life. This is him. This is Dilophosaurus –in reality, the first giant, meat eating dinosaur. He’s 20 feet long, he didn’t spit, he didn’t have a fan that went out like that, but other than that, they got it right,” he said.

Lessem also corrects the mistakes of science which isn’t a bad thing. Science is always evolving as we make more discoveries about our planet’s prehistoric past. Take the case of the Oviraptor which you’ll see on display at DinoVenture protecting its nest of babies.

The Oviraptor (which means ‘egg thief’ in Latin) was discovered by Roy Chapman Andrews in the 1920s among fossils of herbivore dinosaurs and nests, Lessem explained.

“He thought because it was toothless, as the name suggested-it was an egg thief. Well 80 years later, an exhibition from the same museum in New York went back to Gobi Desert in Mongolia and there they found a nest of eggs and the eggs were baby Oviraptors,” he told us.

“So Oviraptor wasn’t a thief, he got bad rap. He was or she was a good parent taking care of these babies, so it’s a chance to illustrate in life form. Velociraptors who were the nasty little hunters of that day were attacking a nest with the Oviraptor sitting on it. Which is what we did in robot form.”

In addition to the painstaking work it took to ensure the dinosaurs in the DinoVenture’s exhibit are as accurately portrayed as possible, Lessem also wanted to get how they have sounded like right too. Or at least as close as what science and research would allow.

He walked us over to the Parasaurolophus scene–showing a mama dino and her baby.

“This is a dinosaur where we actually know what it sounded like because he would blow through that crest on his head and smart guy recreated the exact dimensions using bathroom tubing and blew through it and got a B flat sound,” he explained. “That’s interesting because that’s the same frequency that whales communicate with and elephants –they need to project sound over long distances so this low vibrating tone was great for herds of dinosaurs too.”

If you have little ones who may be frighted of loud sounds, the volume is not too high because this is an exhibit built for families, especially kids.

Lessem is a father and grandfather. He tells his it’s a joy to see kids react to his dinosaurs in real life.

All In a Name

Among the dinosaurs you’ll meet at DinoVenture is the Lessemsaurus. Sound familiar? That’s because it was named after Don Lessem!

“The scientist was honoring the fact that I was raising a lot of money for dinosaur research through exhibitions and in fact, he thought I was very rich because of all of the money generated from the exhibitions and given to science-he was sadly mistaking and found out after naming him after me and it was too late to take it back that I’m not a rich guy,” he said.

Maybe not rich in cash, but definitely rich in soul and passion.

Dinosaurs in Florida by Accident

Lessem recalled a funny story about HOW his dinosaurs became snow birds and ended up in Florida for the winter.

Most zoos and museums around the country don’t have outdoor exhibits in the winter time because it’s too cold and the weather conditions are too harsh, so he picked up the phone and called The Bishop Museum in Hawaii. Or so he thought.

He actually rang The Bishop here in Bradenton, Florida and got the right person on the phone. The museum and its new CEO Hillary Spencer were able to put together a plan with the help of sponsors Mosaic and Bradenton Area Arts and Culture and here we are…standing among a prehistoric pack of new friends!

First, plan to make a day out of it and stay and play in the area. Tickets to the DinoVenture exhibit are separate from museum admission. The exhibit tickets are $10 for all age ranges. Children under 2 are free.

The Bishop does offer reciprocal discounts if you are a member of the following Tampa Bay museums:

The Bishop is close by many walkable attractions and things to do in Bradenton. The Riverwalk is nearby where you’ll find a playground for the kids. There are also plenty of restaurants to enjoy in downtown.

Remi Gonzalez with The Bishop recommended some other close by spots like Pier 22 if you want an upscale sit down experience or Oak and Stone for a casual meal with craft beer.

There are also beaches close by and even a skate park!

You can also find free parking across the street from The Bishop in the Manatee Chamber of Commerce building located at 3rd Street West and 10th Street West. Free street parking is also available in front of the museum on 10th Street West.

You can learn more and explore The Bishop Museum of Science and Nature here to map out your experience before you go!

It’s a great day out for the entire family and a reminder how lucky we are to call Tampa Bay home!

WATCH our tour of DinoVenture with Don Lessem!

You don't have to be a penny pincher to want to take advantage of a free or cheap deal every now and then. We don't...
Read more
Day Trips