INSIDE LOOK: Soar to New Heights on Disney’s Skyliner 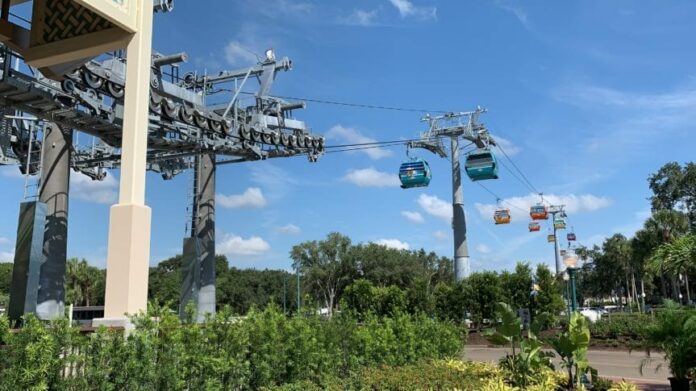 Get ready to soar to new heights at Walt Disney World! The much anticipated Disney Skyliner ready to make magic beginning September 29, 2019 and we’re getting a first look!

The Skyliner gondola system will transport up to 10 guests per cabin between 4 resorts (5 more are within walking distance to Skyliner loading stations), Epcot and Hollywood Studios.

We found the ride to be incredibly relaxing. It’s smooth, surprisingly quiet, and there’s enough of a breeze thanks to the vents and UV coating to keep you feeling cool along the way…we know, this sounds crazy, but it truly doesn’t get hot in the cabin. In fact, you might even find yourself with a case of ‘Skyliner hair’!

One our favorite routes was the ride to the Pop Century/Art of Animation loading station which is the only floating station. On your way, it’s almost as if you are gliding over Hourglass Lake. Super cool!

The Skyliner is open to all guests, not just resort guests, so be sure to make this a part of your next Disney experience!

You can even bring home the magic with some pretty spectacular merchandise whether it’s a t-shirt, toy or Christmas ornament.

Inside Arendelle: Frozen Dining Adventure on the Disney Wish

Imagine being invited to Arendelle Castle to celebrate the engagement of Queen Anna and her Kristoff. That’s what you’ll experience aboard the...
Read more
Family Fun