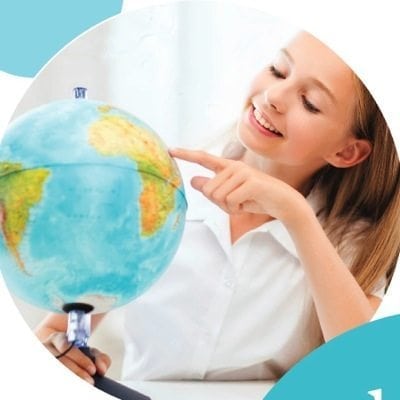 Now, more than ever, parents and educators realize the importance of raising their children to be aware of other cultures and languages. More than 35 years ago, when bilingualism was not a priority, I took a journey that would change my life forever.

By today’s standards, it’s the worst way to learn a second language, but there I was in Largo Junior High’s language lab, headsets on, listening to a voice saying, “Repeat after me … ¿Dónde está el baño?” (Where is the bathroom?)

I always had a knack for languages and by the time I got to Largo High, I earned one of the two vacancies for an exchange program with the American Field Service. At 17, I left my family, new puppy and favorite mutt Feliz, and headed to La Cruz, Chile for a summer exchange program. Paired with the Caroca familia, I would spend my summer attending school.

Leaving home for more than two weeks seemed very strange to me. Leaving for three months seemed foreboding. But I had a feeling it was going to be an experience that would change my life forever. ¡Qué correcto! It not only became one of the top three experiences ever in my life, but it helped shape my future career path as an entrepreneur and bilingual children’s recording artist.

All of the American Field Service exchange students met up in New York for our orientation that summer of 1976. We enjoyed some “team building experiences” and caught our respective planes to our destination countries. Back in 1976, my flight took almost 24 hours, and as a person who loves flying, that was so cool!

My host family met me at the foot of the airplane stairwell, and their two daughters, Ximena and Lily, became my constant companions and best friends for the next 90 days. The host family is encouraged to speak only in their native language, Spanish, so I recall my textbook Spanish kicking in, struggling with conversations for about 7-10 days, and then gaining fluency hour by hour.

It was amazing to experience! Going from all English to allowing the Spanish language to weave into my daily routine and my dreams was something I never really thought about taking place. By the time I left Chile, not only could I read, write, and speak fluently I was dreaming in Spanish every night. ¡Qué extraño!

During my teen years, I kept a journal. Thankfully, I did not break that tradition during my AFS exchange summer. There are written stories of skiing in the Andes Mountains and almost falling over the edge of the cliff where the Beginners’ School was roped off only because I was certain that since I water skied back home that I would surely be top notch at this snow skiing stuff. I promptly traded in my ski poles for a bathing suit and pool chair, where I watched my “sisters” ski by on the advanced slopes.

One evening we were at the discoteca (a dance club for youth), and I was dancing with Christian, a boy I had met after school in the park. Interestingly enough, we were attending an all girls’ school, and the only opportunity to meet boys was after school in el parque. Christian and I had met during my second week in La Cruz and had taken a liking to one another (though my host father insisted on meeting him before I went out somewhere socially with him).

The floor of the club began to shake. The next thing I know Ximena was grabbing my arm and telling me to hurry up and get out. That night was my first experience with an earthquake. No one was injured, and it was a very mild one, but it was enough to scare this American girl from going back to the discoteca the rest of my time in Chile!

One of the most positive things that happened to me during my three month exchange program was my personal transformation. I had left the United States weighing more than I should have thanks to fast food, frozen dinners, and overall poor eating habits. My host family in Chile was a farming family, and I learned to love vegetables, fruits, and lean meats as none of my U.S. staples were even available to purchase in our small town. I looked better, felt better, and upon my homecoming, many of my friends and a couple of family members barely recognized me! ¡Gracias, Caroca family !

What I love about Chile is that it’s a very long country whose topography is so varied. I had the opportunity to experience magnificent brown sand beaches with the most beautiful rocks in Valparaiso and Viña del Mar, then enjoy the winter sports and life at Portillo Ski Resort at the foot of the Andes Mountains, and end up in Santiago, the capital of Chile, with my host family for wonderful dining in the city. (The AFS places students with families considered middle to upper class so that the student has an opportunity to experience some of the country’s and/or community’s offerings.)

As a mother, I enjoy watching all three of my children take a gander at real independence. It’s rewarding when you witness a special child in your sphere of influence dip their toe in, then their foot, and the next thing you know they are taking the leap of independence! Experiencing an exchange opportunity such as I did – before even entering college – provides children with such a heightened level of self-confidence, autonomy and responsibility.

Think about it! You leave the security of your home, the circle of friends you have nurtured for years, the familiar sights, smells and sounds of your community and fly thousands of miles to then immerse yourself in a new country that offers you new people to live with, a new routine, and often times very different sights, smells and sounds. Talk about a life lesson (or 10).

A very important, long-term positive that I gained from my exchange experience is that I have retained Spanish as my second language 35-plus years later, thanks to living in a community that embraces diversity and where I am provided a daily opportunity to practice my second language. Whether it’s conversing with my next door neighbor from Ecuador, exchanging pleasantries with the cashier at a neighborhood store or ordering my lunch in Spanish at one of my favorite authentic restaurants right here in Tampa, I am so fortunate to be able to switch between English and Spanish with barely a blink of an eye.

Never in my 17-year-old mentality did I think as I walked the halls of my host sisters’ school or the streets of La Cruz, that I would one day transfer many of the language and life skills I was learning into a career, but that is exactly what I did.

Children’s recording artist, bilingual educator and keynote speaker Beth Butler is the founder of the Boca Beth Program, which introduces Spanish to young children. Learn more at www.bocabeth.com or call 813-855-5393.