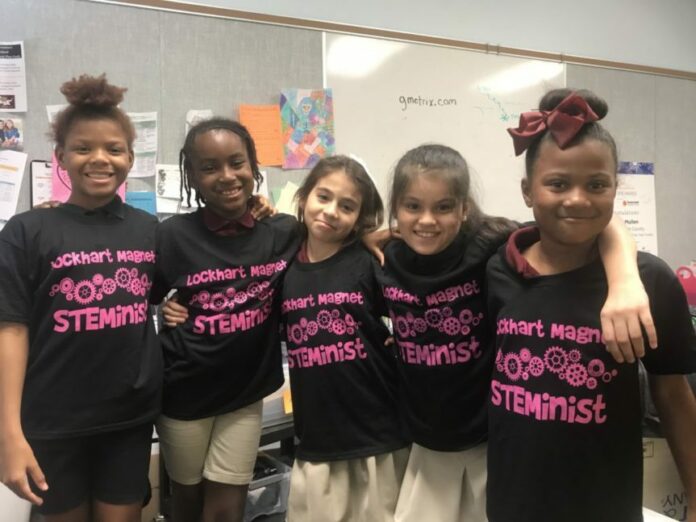 These are just a few ways Hillsborough County Public Schools is energizing more female students with a passion for careers in science, technology, engineering and math (STEM), fields where women are traditionally underrepresented.

If we can get the girls at an early age and show them the possibilities, theyll get hooked, says Nichelle Glenn, magnet lead teacher at Young Middle Magnet, a science and technology school in East Tampa.

Lily Augustin is one of those girls who caught the STEM bug early, while still at Lockhart Elementary Magnet School. Lily was among the crowd of girls testing their paper airplanes one recent afternoon. Her plane didnt go far, but the Young sixth-grader hopes shell go far, with eyes on a career in technology or computing.

There are women in the field of engineering, Mullen says, but theyre not as well known.

Now, students as young as fifth grade meet with mentors.

Programs like these are making a difference. Josephine Corder, lead teacher at Stewart Middle Magnet near downtown Tampa, says boys still comprise two-thirds of the schools enrollment, but the ratio comes closer to even each year. It requires specialized programming and strategic recruiting, such as Girl Scout troops touring the school.

But the effort is worth it when you meet a student like sixth grader Lillie Sopalski. A few boys once told her she couldnt excel at science and math because she was a girl. By fifth grade, she was tutoring some of the same boys who had doubted her.

I proved them wrong, she says.

Its also worth it when you consider where a STEM education can take a student.

Glenn recalls an eye-opening quote from Microsofts DigiGirlz event: Theres an unspecified number of jobs for girls in STEM. How many? Theres not a number. Some of the jobs dont even exist yet.

Tampa Bay's pro sports teams gave us the glimmer of hope we needed in 2020 and 2021 and they're back at it again this...
Read more
Education

A secret of lifelong learners is that new information energizes you. Have you ever started googling information after watching a movie or television show,...
Read more
Back to School

Mentally Preparing for Back to School

Starting a new school year typically comes with a range of emotions, from excitement to anxiousness, and kids might already be feeling this now....
Read more