International getaways are probably not happening for many of us this year, but that doesn’t mean you and the kids can’t go on an epic culinary adventure around the world within a short drive from Tampa Bay.

EPCOT’s International Food and Wine Festival is back with NEW sips and tastes and it just so happens to coincide with new experiences in celebration of Magic Kingdom’s 50th anniversary, a resort-wide event! There’s also a new fireworks show Harmonious debuted last October along with the Beacons of Light that spectacularly illuminate Space Ship Earth.

If you’ve been before, it’s not the same festival you’ve experienced in the past. In fact, nearly 1/3 of the menu offerings at a the more than 25 food and wine marketplaces are brand NEW!

This festival is a great way to introduce your kids to new flavors and cultures around the world while enjoying the magic of Disney.

The Fry Basket (near Test Track) is the only new Global Marketplace this year and it was a team favorite! We ordered the Fry Flight to get a taste of them all which included Sea Salt and Malt Vinegar Fries (vegan), Barbecued Bacon Fries with Smoked Aioli, and Sweet Potato Casserole Fries with Candied Pecans, Toasted Marshmallow Cream, and Carmel Whisky. They also offer a vegan AND gluten free option, Adobo Yuca Fries with Garlic Cilantro Aioli.

The 21+ crowd can chase down the fries with sips from a Tampa brewery beverage, 81Bay Brewing Co. Key Lime Lager from The Fry Basket.

There are also plenty of gluten-free and meatless options too! At Earth Eats near Imagination!, you can nosh on Impossible Burger Sliders and the new Impossible Meatball.

Our favorite NEW gluten-free dish was the Grilled Sweet-and-Spciy Bush Berry Shrimp from Australia which you’ll find near the Port of Entry. We also liked the Roasted Lamb Chop from this marketplace which is also gluten-free.

When it comes to old favorites, you can’t be a the gluten-free ‘Le Cellier’ Wild Mushroom Beef Filet Mignon in the Canada marketplace. The Paella from Spain is another delicious option!

We have so many favorites, but since no two taste buds are the same we highly recommend perusing through the food guide on the My Disney Experience app or visiting TasteEpcot.com to map out your culinary adventure! You will also want to definitely pick up the Festival Passport to keep track too.

You can also use the passport to track your progress in Emile’s Fromage Montage--buy 5 cheese menu items rom a list of 10 and get a tasty prize at the end!

In addition to the 25+ Global Marketplaces that are exclusive to the EPCOT International Food and Wine Festival, there are 43 different dining options within the theme park itself that are there year-round.

If you’re not going on an annual pass, don’t miss a chance to dine at some of these spectacular restaurants–and plan ahead and book your dining reservation in advance via the My Disney app.

One of our favorites is Space 220 which is brand-new and can be found next to Mission: Space in World of Discovery. Kids will love this restaurant too as you board an elevator that will blast you into outer space to dine above the Earth.

For incredible pizza that most certainly does NOT taste like theme park pizza, make a reservation or try your luck with stand-by at Via Napoli Ristorante in the Italy pavilion. We are picky when it comes to pizza and stone fired pizza here is among the best we’ve ever tasted.

If you have a craving for a cold glass of champagne, head to the France pavilion and pop into Les Vins Des Chefs de France. They have a great selection of delicious French wines including Moet champagne, Veuve Clicquot, and even Dom Perignon by the glass.

The ice-cream shop across the way, L’Artisan des Glaces has the best macaron ice-cream sandwiches and you can get your ice-cream spiked if you’re 21 or older!

While the festival is a fun weekend foodie getaway for the parents, it’s also a great family adventure and wonderful opportunity to allow your child to taste the spices and flavors from countries around the world. We highly recommend sharing each dish so you can sample even more tastes together.

But, we also know kids need a chance to …play!

When the moment arrives and the kids need to get the wiggles out, head over to the World of Discovery to play at the Green Landing Play Zone playground.

You can also make the visit a learning experience too! Be on the lookout for the Kidcot stops at each of the country pavilions where your child can pick up an info card with fun fact about each country—this is ongoing all year long, but still a must do. They’ll store the cards in a Ziploc suitcase themed bag. 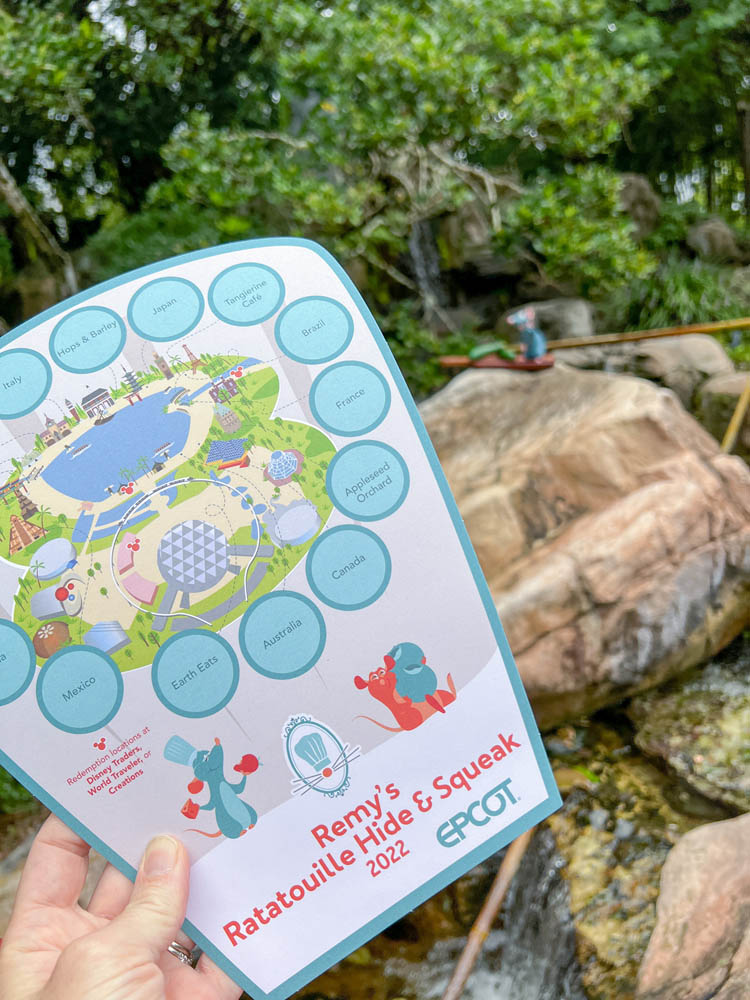 Last, but not least….we also LOVE Remy’s Ratatouille Hide & Squeak scavenger hunt—you can purchase the scavenger hunt card at select merchandise shops for $9.99, or simply track on your own. He has new hiding spots this year, so don’t look where you found him last year!

You can still get your prize, regardless of whether you finish the scanner hunt. It was a cute cup when we were there.

Pluto’s Pumpkins Pursuit will debut next month for the Halloween season, so be on the look out for that fun scavenger hunt too!

If it’s been awhile since you’ve been, be sure to explore the newly expanded France pavilion which features the NEW Remy’s Ratatouille Adventure ride!

In addition to the new ride, you’ll also get have the option of a table service or quick service at the new restaurant, La Crêperie de Paris.

The Eat the to Beat Concert Series is BACK!

We’re super excited about the return of the Eat to the Beat concert series which features some nostalgic big names for moms and dads! I mean…they’ve got Boyz II Men, Tiffany, and 98° on the schedule, so yeah…you’ll be channeling your inner kid/teen too! Here’s what’s on schedule for this year’s Food and Wine Festival: