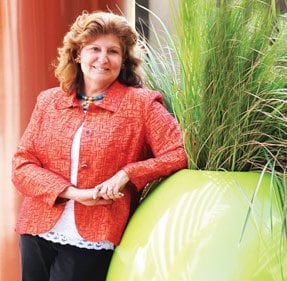 “Shirley Temple was my idol,” she says. “I wanted to sing and dance and entertain.” She even chose her college based on who had the best theatre department, Smith College in Massachusetts. She later became interested in economic development, graduating with a degree in economics and a minor in theater. She later earned an MBA from The Wharton School of Business, but the theater remained in her blood.

While at Wharton, Graham helped organize the first Wharton Follies, a tradition that has continued. In 1980, she came to Tampa and, while she amusingly learned that you can’t hail a cab on Florida Avenue, she has made the adjustment, carving her own path.

She was the first employee of the Tampa Bay Performing Arts Center, now the Straz Center, helping build the arts center into a city institution. Graham also has worked with the Hospice of Hillsborough, now LifePath, as well as with the Tampa Jewish Federation. Today, she’s the president of Stageworks Theatre, the oldest professional theater company in Tampa. The company is planning to open a new theater at Grand Central at Kennedy in the Channel District in July. Stageworks’ mission aligns with how Graham sees the world — embrace diversity and teach tolerance. Stageworks aims to produce shows that entertain and open minds.

On the homefront, she’s been married to Geoff Simon for nearly 25 years, raising two children, Spencer, 19, a business student at USF and Hannah, 13, a student at Coleman Middle.

What do you think is the secret to your family’s success?

Running a family is like producing a play. Everybody thinks they are smarter than the director and everyone wants to play a lead. The key to a successful show is to respect the talent that each person brings to the production. A play is more compelling if the characters are diverse and different; it gives the play depth and variation.  So too in our family – we are a wild cast of characters. Only the family could have brought us together.

My biggest fear is that life moves so quickly and that someday I may stop and realize I forgot something important. Life seems to consume us. I truly believe that “Life is a Cabaret” and if you don’t take advantage of every opportunity it is your loss. I also believe that in today’s fast-paced, cyberworld it is easy miss the essence of life.

What advice would you give to other women?

My advice would be to know the rules, but be ready to break every one of them.

My proudest moments were being chosen by the Greater Tampa Chamber of Commerce as the Cultural Contributor of the Year and being selected as Gulf Coast Jewish Family Services’ Celebrity Couple of the Year for our work in the AIDS community.

What is your biggest achievement?

I do not think of myself as having a “biggest achievement.” I see life as a progression of many achievements, all of which inspire you and lead you to your next achievement. It’s like Climb Every Mountain, a song from the Sound of Music. There is always a mountain in front of you and you climb it till you find your dream.  So, I am in my climbing mode. Along the way I have had many magical moments, including marrying Geoff Simon and being lucky enough to be the parents of Spencer and Hannah. Also, being inducted into the National Women’s Hall of Fame for work in AIDS awareness and being handed the award by Martina Navratilova and standing on Morsani stage at the performing arts center and welcoming everyone to the first performance.

Watching the 25th anniversary celebration of Les Miserables on WEDU and hearing the mesmerizing song Bring Him Home. Seeing children at the theater. Watching my daughter get her round-off back-handspring tuck for the first time. Dancing with Geoff to our favorite sixties songs and really letting loose. Watching our children become a Bar and Bat Mitzvah and not saying, “no whip cream!”

My favorite relaxation is a rigorous workout. I put in my ear plugs, turn on my Michael Jackson, get my body moving and away I go. I also love to lose myself listening to a Broadway show, my all times favorites being Man of La Mancha, Les Miserables, Miss Saigon and Sweeney Todd.

What else would you like to share with our readers? About being a mom, about your work?

Stageworks just closed a show called The MOMologues, which we ran in Ybor City for two weeks. It was all about how overwhelming, difficult, exhausting, confusing, terrifying yet wonderful, fulfilling, loving, satisfying and rewarding being a mother is. We advertised it as “the toughest job you’ll ever love!” And that is how I feel about being a mother. The closing line of the show really sums it up for me: “This is, by far, the most important thing I have ever done.”

How do you enjoy or draw information from the magazine?

I love this magazine. I have gotten much helpful information about parenting from the articles and I love looking at the advertisements. I have found several of my kids’ summer camps through the magazine as well as other kid-friendly events going on in the community.

What is your favorite thing to do with your kids in the Tampa Bay area?

My favorite thing to do with my kids is to take them to one of the many performing arts venues and opening their eyes to the world of creativity. For Spencer’s graduation from Plant High, we gave him a subscription to The Florida Orchestra. He has surprised all of us by really enjoying the concerts and he wants to renew for next year.

What is your biggest inspiration or most significant role model?

My biggest inspiration is waking up every morning, turning off the alarm, stretching a delicious, first-stretch-of-the-morning stretch, pulling my eyes open, seeing the sunshine and then realizing there is a world of possibility just outside the room waiting to be discovered. Golda Meir said, “Trust yourself. Create the kind of self that you will be happy to live with all your life. Make the most of yourself by fanning the tiny, inner sparks of possibility into flames of achievement.” When I look in our Tampa Bay community, I see many tiny sparks of possibility that have been transformed into flames of achievement.