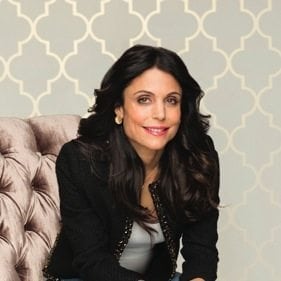 From a natural foods chef to best-selling author, reality TV star to self-made businesswoman and animal rights activist, Bethenny Frankel is many things, but what she prides herself on most is her job as mom to daughter Bryn.

Adding to her list of duties, Frankel is bringing her uniquely honest, unfiltered and playful perspective to daytime television this month on Bethenny. Her new show is expected to become the go-to destination for women to learn, laugh, feel inspired, be transformed and, ultimately, in Bethenny’s words, “Always go for it.”

Before quickly coming to assumptions about her rise to business mogul status, it’s important to note that successes have not come easily for this mom of one. Her early life, part of which was spent in Florida, has been described as difficult with her father leaving the family early in her life. She’s described her father as “always drinking” and often argued with her stepfather. After graduating high school, Frankel moved to New York to attend New York University.

After earning a degree in psychology and communications, she moved to Los Angeles to pursue a career in acting, which only produced small roles in films like Hollywood Hills 90028 and Wish Me Luck. When describing her life in L.A., she told Forbes, “I didn’t know what I was doing; I was broke.”

Once Bethenny returned to New York, she attended and completed studies at the National Gourmet Institute for Healthy and Culinary Arts. Soon after BethennyBakes was established with the idea that, “I would be the next Mrs. Fields, the next Famous Amos, but the healthy version,” she explains in her book A Place of Yes.

Frankel first came to national recognition after appearing on NBC’s The Apprentice: Martha Stewart, completing the season as runner-up. She later leveraged her appearance on the show into an endorsement deal and monthly column in Health magazine.

Network executives saw a personality they couldn’t ignore so they put her center stage on Bravo’s hit The Real Housewives of New York for three seasons. She emerged as the star of the series, with a huge network of fans, which led Bravo to create a spin-off series, which premiered with the highest ratings in Bravo history.

Soon after appearing on Bravo’s The Real Housewives of New York City, Skinnygirl was launched. The company is described by People as “a food and lifestyle brand catered to healthy living.” In April 2011, Frankel sold Skinnygirl cocktail company to Fortune Brands’ Beam Global for a reported $100 million.

Last year, Frankel checked novelist off her list with the release of Skinnydipping, which was an instant New York Times best-seller. Her book Naturally Thin: Unleash Your Skinnygirl and Free Yourself from a Lifetime of Dieting debuted on the New York Times Best-Sellers list and remained on the list for an impressive 18 consecutive weeks.

Frankel has also penned The Skinnygirl Dish: Easy Recipes for Your Naturally Thin Life, The Skinnygirl Dish and A Place of Yes: 10 Rules for Getting Everything You Want Out Of Life, which spent 13 weeks on the New York Times Best-Sellers list. Skinnygirl Solutions, released this summer, includes tips on wellness, career building and more.

Frankel’s uncanny ability to engage with audiences through her books will leap onto TV screens nationally this month with the launch of Bethenny. The show will cover the topics that women care about most — from love and relationships to celebrities and pop culture and beauty and fitness — all through Bethenny’s own relatable personal and professional life experiences. From fun and spontaneous celebrity interviews to informative takeaways on health and relationship issues, Bethenny is sure to become the go-to destination for women every day to learn, laugh and feel inspired.

Here’s what Bethenny had to say about her fears, achievements and inspirations.

What do you think is the secret to your success?

Not getting a good night’s sleep.

What advice would you give to other women about balancing a career and motherhood?

We plan and you’ve got to laugh. Just roll with it. You’re going to strive for balance and that is probably the best you are ever going to get. Just strive.

Giving birth to my daughter.

What is your biggest achievement?

Writing Naturally Thin and being able to effectively communicate with women about their food issues.

My daughter, yoga and sleep

My daughter, yoga and sleep

What kind of message would you like to give women?

Be open, be truthful and be fearless to achieve things you never dreamed possible.

What else would you like to share with our readers? About being a mom, about your work?

That it’s possible to have both. You just have to be organized, efficient and make sure you have quality time with your family.

Who is your biggest inspiration or role model?

After so much success so fast, how do you stay grounded?