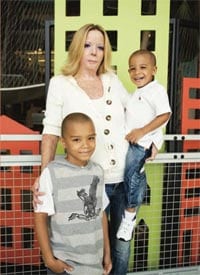 On the way to the park with Audrey Mabrey and her two boys, she shows off her new purple umbrella. It’s a must-have item for the young woman severely burned nearly two years ago by her estranged husband. Her skin still healing, the umbrella helps. Mabrey doesn’t leave home without it.

She is the cool mom on the playground, making an entrance with her umbrella. Her sense of humor and mischief in tact, she drops the umbrella long enough to whiz down curvy slides with her sons, 2-year-old Maleek and 5-year-old Maliki. “Whee” all the way down. Mabrey is happy to be alive and thrilled to say her estranged husband did not break her spirit or rob her of raising her boys.

Christopher Hanney is charged in the November 2009 attack in Apollo Beach that left Mabrey with burns over 80 percent of her body. Hanney is accused of stabbing her, raping her, beating her with a hammer, then setting her on fire. Jurors selected for the trial will hear the account directly from her. Mabrey plans to take the witness stand when the trial begins later this month.

“Seeing him and facing him that’s like a cakewalk for me. But coming out with a not guilty verdict that troubles me,” says Mabrey, referring to the possibility he might get off. “I’m concerned that people are not going to believe this for some reason. I find that interesting because I know that it’s the truth,” she says.

In the months ahead, Mabrey is focused on her journey of recovery. Her skin is far from the only transformation taking place.  Regular counseling visits, volunteering at the nonprofit Hands Across the Bay and plenty of play time with her boys are her best medicine.

“I try to talk to them as honest as possible,” says Mabrey. “At this point my kids are too young to really know, but my oldest is not too far from putting together the complete picture. He knows his dad went away and that his dad can never come back.”

Domestic violence affects one in every four women in the U.S. The abuse takes many forms. It can be physical, emotional, financial or a combination of the three.

Looking back on her marriage, Mabrey says she missed the warning signs — jealousy, isolation from family, threats made in jest.  “It was all about power and control,” says Mabrey – echoing the mantra of advocates everywhere.

“Convincing someone to leave a toxic relationship is challenging at the very least. Expecting someone to believe that something like this could happen to them is unrealistic,” she says, softly touching her skin. “I myself didn’t believe it could ever happen to me. I think educating [women] about their options and the possibilities for a better life is more important than trying to convince them to leave. If you try to convince them, they immediately protect their abuser and deny.”

It’s a message she shares when talking to groups, big and small, or just answering a question from a stranger while in the grocery checkout line.

This fall, she will share her message with her largest audience yet – joining the team at ABC Action News for its third annual Taking Action Against Domestic Violence campaign.  Mabrey will narrate public service announcements to air Sept. 12through Oct. 23 during the station’s Emmy award winning campaign and during the 2011 Taking Action Against Domestic Violence Primetime Special at 8 p.m. on Oct. 14. In addition, Mabrey’s public service announcements will be shown nationwide by Sykes Enterprises as part of the company’s employee training.

“You’re not alone. Call the hotline for help,” she says, referring to the statewide domestic violence hotline at 800-500-1119. Operated 24/7, the hotline connects callers to the certified domestic violence center nearest them, where trained advocates are standing by to help create a safety/escape plan.

Tampa Bay at noon weekdays. For more on the Taking Action Domestic Violence