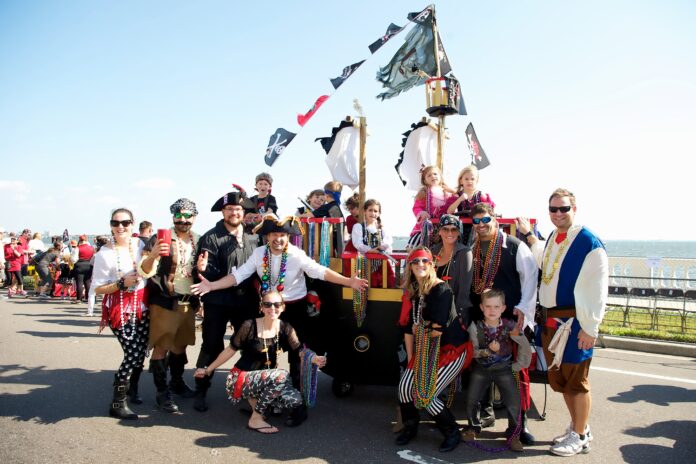 Calling all pint-size pirates and diminutive buccaneers! The Children’s Gasparilla Parade is BACK for 2022!

And lucky you, because only in Tampa Bay do we have an entire afternoon set aside for the tiniest of our sea-faring folk to strut their stuff up and down Bayshore Boulevard.

The 75th Ashley Children’s Gasparilla Parade presented by Chick-Fil-A is Saturday, January 22, 2022. Whether you’re new in town or a seasoned buccaneer who keeps her dagger sharpened and his seafaring legs braced, this day might be the most fun one of the calendar year till Halloween and Christmas swing back around.

In addition to the actual parade, which features dozens of floats rolling down Bayshore Boulevard throwing beads, there’s a bicycle rodeo, a preschooler’s stroll, an “air invasion” and SOCOM jump, and to cap it all off, a magnificent fireworks display over the bay.

Learn more about how to elevate your day with reserved seating during the parade. This is a great option if you are looking for a bit more space and a front row view!

Before parade day, in addition to mapping out your day–which we’re here to help with–think abut what you’ll be wearing! There are some really great locally owned businesses in Tampa Bay that have a wide selection of Gasparilla gear. We’re sharing some of our favorite places to shop here.

Related: Why we celebrate Gasparilla: The legends and history of one of Tampa’s most treasured traditions

And, don’t leave home without a few necessary items:

Let’s start with the important details…like where to park and the route!

Street parking close to the route will be hard to find and there will be a ton of traffic due to street closures. You might get lucky and snag a paid parking spot in a lot near the parade route, but if you’d rather not deal with it, plan to park in the Fort Brooke Garage (you can also park in the Whiting Street Garage if this one fills up) in Downtown Tampa. The city will be charging an event rate to park.

From there, walk to the Riverwalk and then over bridges to Bayshore and Platt Street, near the Publix where you can catch a ride on the FREE Jolley Roger Trolley from 10am-8pm. The city does a good job of directing you on where to go–they have several decades of doing this under their belts, so it’s pretty much down to a science now. The Jolley Roger Trolley will get you closer to the parade route at Bay to Bay & Bayshore.

The Trolley will continuously loop during that timeframe between 10 am and 8 pm which is good news if you have to leave early or you’re running late.  Learn more here. 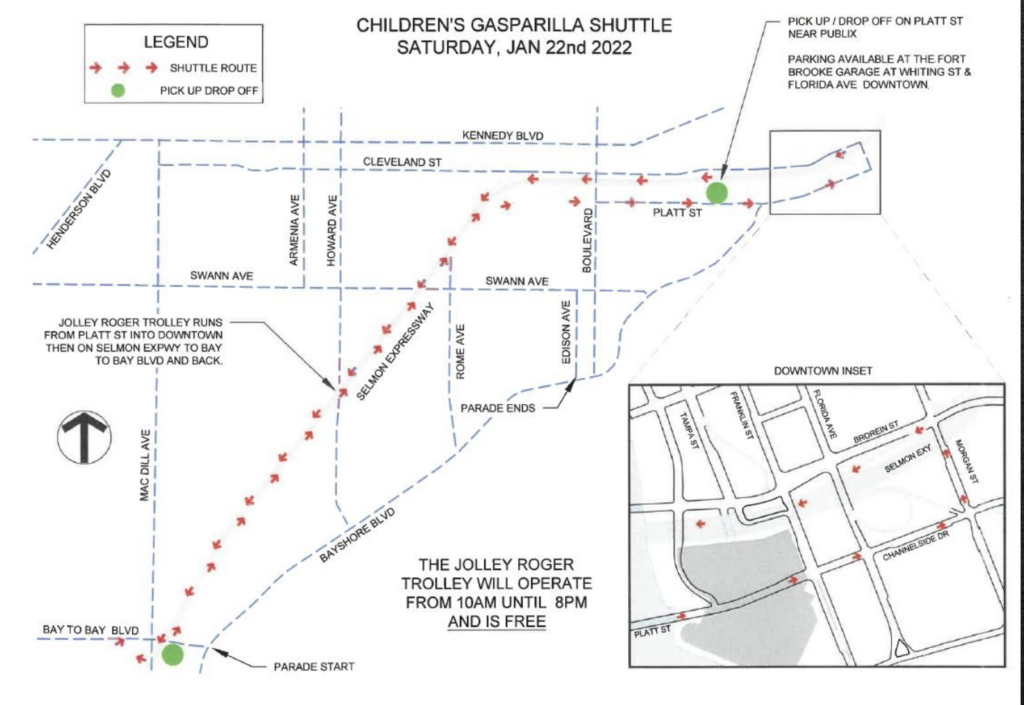 Another option for parking is to pay at one of the lots at schools and businesses nearby. Bayshore Christian and Academy of the Holy Names, both on MacDill Ave, have offered paid parking in the past. Hyde Park Village also announced on January 22 via their Instagram page that paid event parking will be offered for $30 for the Children’s Parade.

The Children’s Parade follows a shorter route along Bayshore Blvd than the parade during Gasparilla Pirate Fest. It steps off at Bayshore and Bay to Bay and ends around the area of Edison Ave.

The Gasparilla Children’s Parade is alcohol-free. This is a family event–-save the libations for next weekend’s Gasparilla Pirate Fest on January 29, 2022!

While the parade is the main event, Gasparilla is so much more than a parade! It’s an all day long celebration with plenty of things to do before and after the parade!

Here’s the lowdown on what to expect: 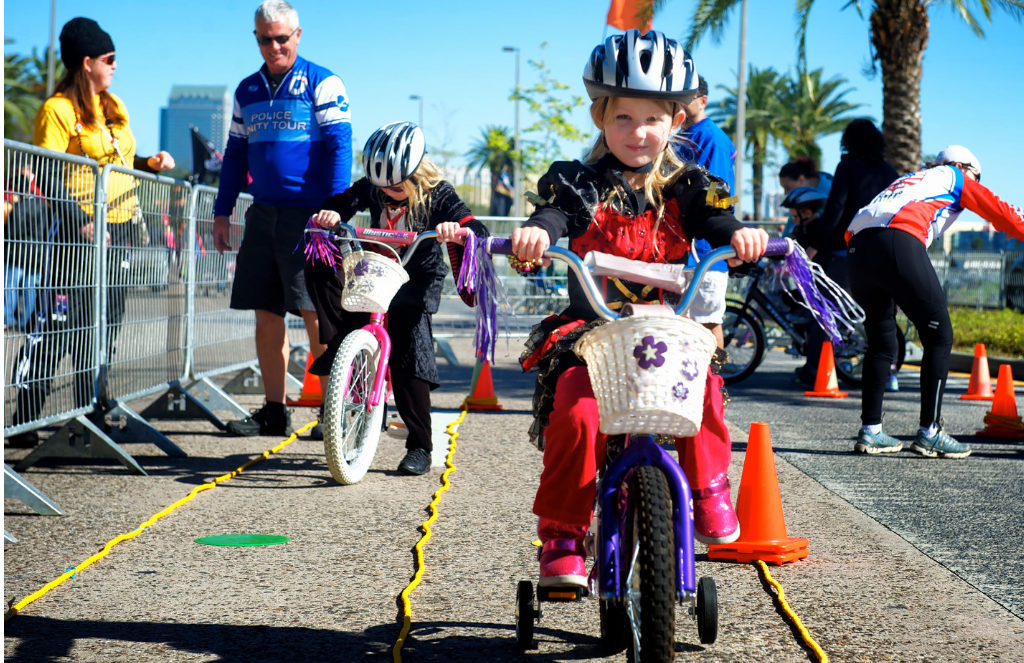 Ships are all very well, but sometimes, a pirate needs his or her wheels. Come check if your skills are up to par by participating in the popular Bicycle Rodeo on Bayshore Boulevard between Rome Avenue and Dakota Street  from 11 a.m. to 1 p.m.

“The clinic is a basic skills course and general education of bike safety for kids ages 4-17,” explains Tampa Police Officer David DiMarco. “Our target audience is typically 6-14 years of age.”

Participants will be fitted for a free bicycle helmet while supplies last. Bikes are available for use at the Rodeo only, but you are welcome to bring your own bike too to give it a try. 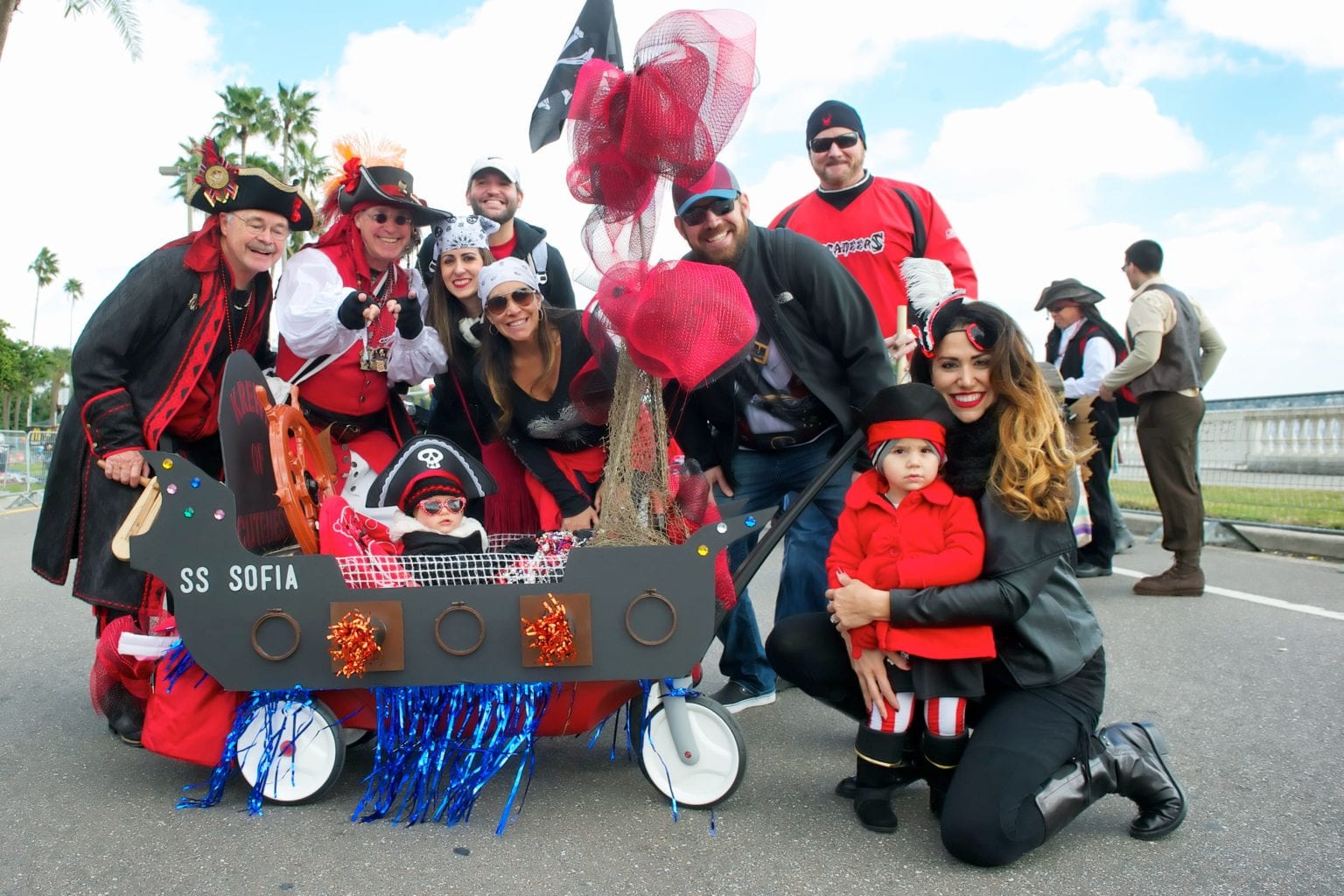 At the 2022 Gasparilla Preschooler’s Stroll presented by EventFest, another Tampa tradition that was started in 2005, kids 5 and under can strut their stuff down a half-mile parade route from Howard to Rome Avenues. Any little ones who don’t yet have their land legs can parade in or on a decorated scooter, stroller, bicycle or tricycle. Grand-pirates and others can get the best view of the parade from the Howard Avenue bleachers.

So dust off those feathered hats. Polish those boot buckles. Put the final touches of frippery and feathers and beads on that wagon. Because when you roll down that road with the kind of swagger your parents can only dream of imitating, you’ll want to be seen on the sweetest ship on the sea.

This is the main event, and each year, the crowds have only gotten bigger! So come early and find a good spot. The Children’s Gasparilla Parade will begin at 3:30 pm at Bay to Bay and Bayshore Boulevard, proceed north along Bayshore Boulevard and end at Edison Avenue.

Past parades have seen more than 100 units roll past, with marching bands, dance units and numerous school, community and neighborhood organizations. The highlight, of course, are the krewes and their elaborate floats. This is where kids 6 and above can participate.

Train your eyes on the skies for incredible shows put on by aerobatics flying vintage military planes AND the United States Special Operations Command (SOCOM) Parachute Team as they perform a “Gasparilla Air Invasion,” landing on Bayshore Boulevard just before the start of the children’s parade. They’ll perform again at night just before the day’s grand finale—the Gasparilla “Piratechnic” Extravaganza Fireworks show—which will be launched just off Bayshore Boulevard. The ideal spot to watch the fireworks from is near Show Center at Howard and Bayshore, as this is where you’ll best hear the music to which the fireworks are timed.

You can come early and snag a spot for your blankets and picnic on the grassy median, or you can upgrade your day and reserve seats for a price. Bleacher seats are $55 and First Mate chair seats are $65 each. There are other upgrade options, too!

For more information, to reserve seats or stock up on pirate gear, visit www.gasparillatreasures.com.

*Activities and vendors open at 11am along Bayshore between Bay to Bay and Edison.

11:00 am-1:00 pm
Bicycle & Pedestrian Safety Rodeo presented by Tampa Police Dept, onBikes, and EventFest:
You and the kids can join Tampa Police, FDOT and EventFest at the rodeo where your kids can test their skills on the bike course, learn life-saving safety skills and even get fitted for a free helmet while supplies last. This is one of our favorite pre-parade activities that the kiddos love!
Location: Bayshore Blvd & S Rome Ave

12:00 pm-3:15 pm
Gasparilla Air Invasion presented by EventFest
Watch in awe at the precision parachute jump, be amazed by vintage aircraft, and jump for joy as the stunt planes perform their aerobatic moves over the bay!

1:00 pm-2:00 pm
Gasparilla Preschoolers Stroll presented by EventFest
Watch as pint-sized pirates show off their pirate best along Bayshore Blvd! It’s perhaps the cutest parade you and the kids will ever see! It steps off at Bayshore and Howard and continues down Bayshore Blvd to Rome Ave.

3:30 pm-6:00 pm
Gasparilla Children’s Parade presented by Chick-fil-A
Get ready to catch some beads!!! More than 100 units will be participating, including krewes, local schools, community organizations, dance schools, school bands and more! Be sure to pack some snacks and waters for your little ones. No one likes a hangry pirate! ?

6:30 pm-7:00 pm
Gasparilla ‘Piratechnics’
Don’t ye leave yet, matey! The Piratechnic display recreates the epic imaginary battle at sea between Ye Mystic Krewe of Gasparilla and the City of Tampa! This is deep rooted in tradition with the invasion taking place every year since 1904. The fireworks display is surely going to be a stunner!