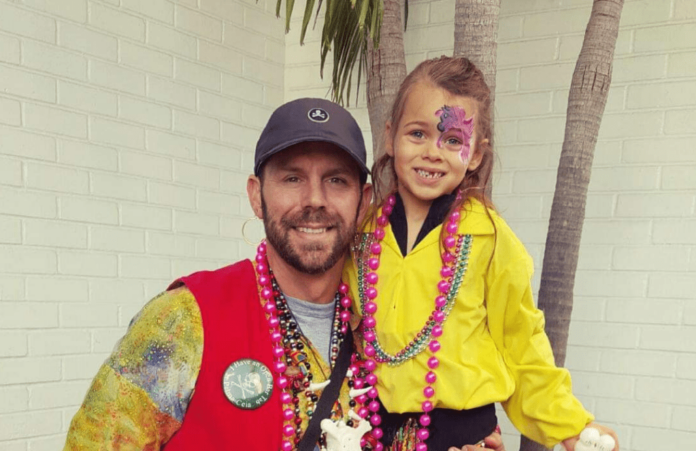 Gasparilla is about more than beads. Gasparilla is about tradition. The Gasparilla parade, dating back to 1904, was started by Ye Mystic Krewe of Gasparilla—now several hundred members strong. Two members of YMKG share why membership is meaningful and how their children carry on traditions. Fear not mates: a swashbuckling member of the all female Krewe of Queen Anne’s Revenge also shares perspective.

RELATED: Your Guide to the Best Gasparilla Adult Parade, Ever!  All in one place!

A first generation krewe man, Jeramiah’s Gasparilla memories date back to his childhood: “Folks my family loved were krewe members and Gasparilla was always a magical time.” Bustin fondly remembers walking to the children’s parade with his family and sitting on a blanket in the median: “It felt like Christmas.” His mom, a former parade participant, made parade days special: “She dressed us like pirates and bought us plastic swords from street vendors.” Bustin holds strong to Gasparilla memories his family made.

A YMKG member since 2010, Bustin enjoys sharing the magic of Gasparilla with Tampanians, tourists, and transplants. A local element of YMKG is ingrained in him, and he takes pride in promoting Tampa. With YMKG, Bustin has introduced Tampa to corporations, helped Visit Tampa Bay with community outreach efforts, and participated in numerous local parades.

Bustin treasures his experiences with YMKG’s Ye Gaspar’s Grenadiers. Throughout the year, the group visits hospitals—lifting pediatric patients’ spirits: “Days at the hospitals are heartfelt,” Bustin expressed. He’s visited All Children’s Hospital, St. Joseph’s, and Tampa General: “We give patients beads if their immune systems are capable. We take coloring books and cannon balls, too.” The visits further establish YMKG throughout the city. Bustin emphasizes the myriad outlets within YMKG for philanthropic work: “We are ambassadors for Tampa.”

This year, Bustin will share Gasparilla’s nostalgia and magic with his sons—Callan (7) and Caleb (5). They’ve played in his pirate gear for years and look forward to riding on YMKG’s float during the children’s parade. The boys’ membership in YMKG is years away, but Bustin hopes they eventually experience the camaraderie and support the organization’s given him: “I’ve made friends I wouldn’t have otherwise met. We look out for each other.” Bustin’s fired up to share another Gasparilla season with YMKG—an organization he’s been enamored with his entire life.

Brian is a Ye Mystic Krewe of Gasparilla legacy: “My dad was a krewe member,” Agliano shared; “I remember attending YMKG parties as a 13-year-old. I’m proud I joined and am carrying on traditions.” A YMKG member for 12 years, Agliano recounts Gasparilla as a favorite family day during his childhood. Now a father and uncle, he loves sharing the pirate’s life with his daughter and two nephews.

On children’s parade day, Brian and his dad take the kids to Palma Ceia Golf and Country Club for breakfast, pirate makeovers, and bounties of fun. This year marks Bella’s third parade with Brian. Now that she’s 8, he’s especially excited: “She’s strong enough to throw beads to spectators now. It’s a blast seeing her and my nephews excited about throwing beads and then receiving beads when we attend tent parties.” A long day by choice, Brian remembers carrying a tuckered out Bella for over a mile after last year’s children’s parade—an event capped off with a fireworks spectacular: Gasparilla Piratetechnics.

Brian enjoys wearing pirate garb and visiting Bella’s school. He laughed, “When younger, she was confused about why daddy’s voice was coming out of a pirate.” Invading classrooms to hand out beads, read pirate stories, and answer questions about YMKG is rewarding. Brian enjoys giving beads to kids and the elderly because both appreciate them and show enthusiasm.

For Brian, YMKG is quintessential Tampa: “It’s great bringing so much life into our city on parade day. It’s always been my favorite day of the year.” A busy working dad, riding the YMKG ship on parade day creates time with friends: “Four of us spend the day sharing good chaos.” He’s set for embarking on another Gasparilla season—carrying on tradition with his closest mates.

Jen Iavarone from the Krewe of Queen Anne’s Revenge

For Jen, Gasparilla’s been lifelong and year-round. She’s passing the traditions to her children, Declan (7) and Malin (3): “Growing up, parade days meant looking for my uncle and best friends’ dads—all pirates. Now, my favorite memory is riding the KQAR float with my son while pregnant with Malin.

This children’s parade is Declan’s third on KQAR’s float and Malin’s first: “She’s my legacy for the krewe and is ecstatic about her costume.” A former costume designer, Jen designs krewe members’ costumes: “I host an annual hat making party and the kids love it. Gasparilla lasts all year for us, from designing to walking.”

Co-owner of Malio’s and Remedy, she hosts enviable parade after-parties. 2019 marks an inaugural block party. Community engagement is part of their pirate lifestyle, and the family has participated in toy drives and wrapping parties. Jen’s proud to be KQAR’s hype girl: “I carry a tambourine and make people dance for beads. The smiles I get from kids and older people are amazing.”

Yo Ho Yo Ho