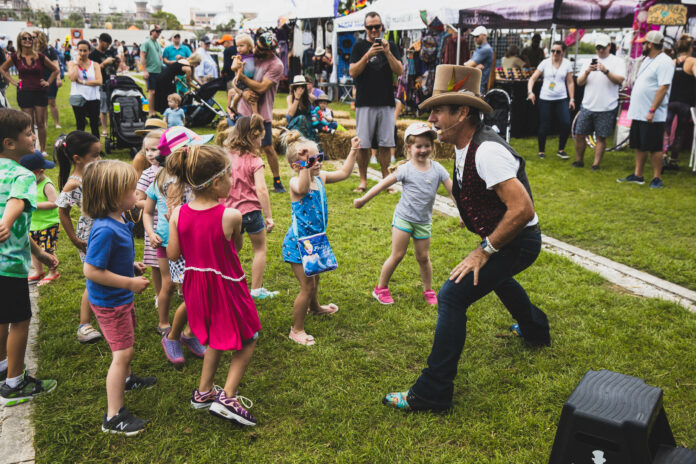 The changes brought about by becoming a parent are unparalleled. Still, our passions and pastimes don’t just fade away.

Those who were music lovers before children want to share that love with their kids after they become parents. If arts and culture events fill parents’ social lives, those also become experiences parents want to share with children.

Related: Growing Up GMF: Meet some of the families who brought GMF to life

A fervent music lover, Cox had the idea for GMF after years of attending music festivals and serving on the Gasparilla Film Festival’s Board of Directors.

“The New Orleans Jazz Festival and the Newport Folk Festival both had facets I wanted to bring to a music festival in Tampa,” Cox says.

“I don’t have a musical background, but I have a deep love for Tampa Bay. Completing my high school service hours with the Gasparilla Arts Festival helped instill in me, early on, an appreciation for local arts and culture.”

The festival will also serve up what Cox calls “indigenous Tampa food.” Staples like Cuban sandwiches, grouper sandwiches and deviled crabs are crowd pleasers in the 813.

“That really sweetens the deal for music-loving-parents,” Cox says.

Daytime performances include a spread of kindie rock which, with its singer-songwriter sensibility and kid-centric themes, appeals to ears of all ages.

Cox notes that much of the children’s programming has consisted of Grammy award winning artists.

This year, festivalgoers can enjoy Josh and the Jamtones—a Boston based ska band sure to have everyone in the family dancing the day away.

Also taking the stage is Gainesville’s Bears and Lions, a wild mix of theatrics and rock, which basically sounds like breakfast time with kids.

Many kids (and even a good number of adults) have short attention spans.

They crave variety. Like the finest box of chocolates, GMF offers just that.

March 7 and 8 Curtis Hixon Park is filled with face painting, a tie-dye shirt-making station, an interactive painting wall and plenty of green space for kids to run free.

A partnership with Tampa General Hospital is instrumental in making the extensive children’s programming possible.

For Cox and thousands of other GMF supporters, making time for musical experiences with family is a must:

“My kids even come out to instrument drives we hold as part of our Recycled Tunes program—aimed at refurbishing and providing instruments to schools with limited financial means.”

Cox and many other committed GMF supporters believe exposing their children to Tampa Bay arts and culture, as well as philanthropy, nurtures important qualities within the next generation to carry Tampa’s torch throughout the 21st century.

Keep the flame of your passions burning bright by using it to light passions within your children. Fire it up with the Gasparilla Music Festival.

Fire it Up by Learning More!

Step up: Learn more about Recycled Tunes & how to donate

Tampa Bay's pro sports teams gave us the glimmer of hope we needed in 2020 and 2021 and they're back at it again this...
Read more
Family Fun

Can you believe it's almost time for school to start? Children in Hillsborough, Pinellas, and Pasco County will return to school on August 10th....
Read more
Beaches + Water Parks + Splash Pads

Just south of Fort Myers tucked away to the west, sits the 15-mile-long island of Sanibel. Founded in 1888, Sanibel is about as quaint...
Read more