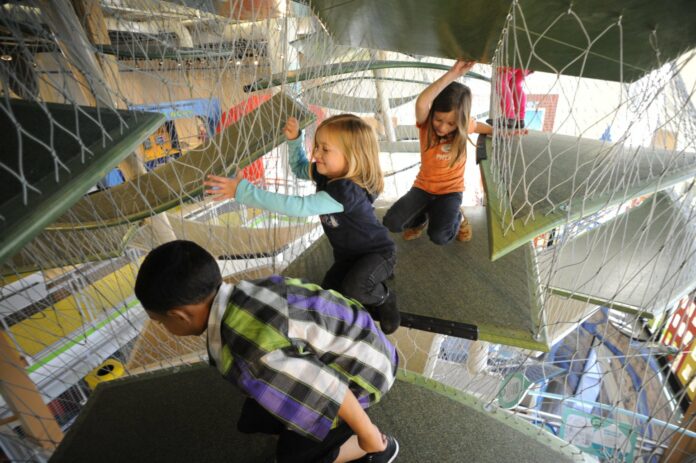 Dream It. Be It. ​You’ll see it as a tag line on Glazer Children’s Museum ads, but did you know that it is actually our curriculum?

DREAM is Glazer Children’s Museum’s version of STEAM. ​ Your child, while at the Museum, is immersed in “trying on their future” through our series of exhibit galleries, programs and experiences. The Museum is here to make playing to learn impactful for your child while preparing them to be part of what we call the Imagination Generation. Through DREAM, we explore and emphasize reading, engineering, arts, math, music and how our world is designed.

Below are just a few of my favorite ways to allow your child’s imagination to run wild at Museum while helping them shape their own future.

Be a Global Explorer
In late 2016, we opened a new, two-story area called The Global Cafe, comprised of a downstairs “language lessons” bar where we also do global crafts and an upstairs dedicated to West Africa (a drum hut) and Japan (a pagoda with tea settings and a sushi prep counter). Whether your child is trying on a traditional outfit (grown-ups can too), trying their hand at origami or participating in a call and response drumming circle, the emphasis on exploration helps kids understand and find similarities and differences in culture. ​Because of the way our brains form, the best time to learn a language is under the age of 8. ​One of my favorite books is called “If The World Were A Village,” ​and it puts the entire population of Earth into 100. If you spoke just a few languages, you could speak with most anyone on the planet easily.

This month, we’re engaged in celebrating our world and the diversity in it – maybe it will be through our food demonstrations on Wednesdays, storytimes, our Dragon-themed end-of-the-day parade, or cool crafts like cornhusk dolls or gyotaku. We even have new global summer camps planned!

Did you know?​ If you go on vacation this summer, we’d love to have you collect things from other countries. We’re looking for sand, dolls, books, postcards, stamps, flags, menus or other items with writing, clothing and other ​traditional (not tourist)​ items that you’d like to collect and donate to the Museum. Check out ​www.glazermuseum.org/yourglobalshoebox​ for more information.

Make room for your imagination
In May, we’re bringing you a ​new exhibit​, ​Forts!​ Forts! Is an addition to our already robust options for imaginative play in the Museum. There is a special element of childhood that is really 85 percent imagination and 15 percent reality and that reality is just enough setting and ample “tools” to fuel play all day. Glazer Children’s Museum plays into this creative curiosity, this wonderment, by offering a host of areas for pretend play, from our Vet Clinic and Fire Station to our Cafe and Publix Grocery Store. Kids can play a variety of roles and try on adulthood by working at a hospital or landscaping and gardening around the house. To build on this construction of “my own space,” we’re bringing you a living room full of blankets, pillows and furniture where your little one can build a creation colossal or cozy. Enjoy Forts! We think you’ll love it!

Be a Math Wiz
Over the past few months, we’ve been playing a lot with math concepts, from our
Math+Art+Bots pop-up and Pi Day but also highlighting more math in our Grocery Store, Cafe and in our school workshops. We also partnered with Bedtime Math to prototype new exhibits on math and are preparing for a new curriculum for schools this fall with robotics. ​Recent research from the Joan Ganz Cooney Center at Sesame Street tells us that preschool math skills are a more consistent predictor of later academic achievement that either reading or attention skills.

Therefore, you’ll see Glazer Children’s Museum continue to escalate its work in math into the future for kids of all ages. Case in point: ​We’re bringing a 5,000 square-foot blockbuster traveling exhibition, Math Alive! to the museum starting Memorial Day weekend. ​It’s a don’t-miss exploration of how math touches our lives, from robotics to fashion, video games to snowboarding. Experts in math careers will navigate you through this exhibit which is a wonderful opportunity, especially for your 7-12 year olds.

Join us at the Museum and watch how your child’s DREAMS begin to add up to their successful future.

Why Imagination?
Pick an innovator. Steve Jobs. John Lennon. George Lucas. Our world previously changed by industrialization and trains, and before that, by written language. In the 20th Century, computers changed the game entirely. So, now as we have a 21st Century ahead of us, what becomes really innovative? Not simple problem solving, but ​imagination​. Our children have the ability to invent our entire future if they want. It’s just a matter of keeping their curiosity, their dreams and their ideas alive. It’s what we call the Imagination Generation, and we at Glazer Children’s Museum think it’s going to not just drive our economy, but revolutionize our way of life. It’s why we invest in children, from birth, each and every day.

“This place not only gets the imagination in gear, it gets the kids physically moving and actively interacting.” -Ellen H. on Facebook