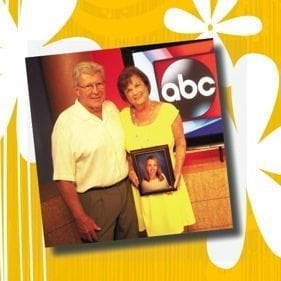 The power is in the storyline’s subtly. There’s no violence, no cursing, no screaming. It’s just a girl telling her story.

“The very first time I saw The Yellow Dress, I was very emotional. I was in tears, in fact.” says Bonnie Roebuck, whose Heather’s Hope Foundation partners with Heartland for Children in Bartow and Deana’s Educational Theater in Massachusetts to bring the play here.

Roebuck’s only daughter, Heather, was killed five years ago by husband Clay Rimmer. The couple had been high school sweethearts, together for 15 years when the murder-suicide happened.

“The play depicts what it must have been like for Heather dating Clay. He was possessive, extremely jealous and controlling,” says Roebuck. “I really do feel with all my heart that if Heather had had an opportunity to see The Yellow Dress, she most likely would have tried to get out of the relationship with Clay and maybe even come to me.”

At the time of her death, Heather was a schoolteacher. “It would’ve sounded the alarm bells of the danger to come,” says Roebuck as we watched the play together at Tenoroc High.

The play and Deana’s Educational Theater were created in memory of Deana Brisbois, a victim of dating violence. Twenty years later, countless numbers of teenagers have seen the play and though the story is not theirs, it still resonates with many of them.

It’s a stage play, a reality check and a lifesaver. It can be overwhelming and haunting, immediate and slow, says Laura Modrall. And she should know! She’s got the clearest view in the house – center stage!

“Before every show, I stand backstage and listen to the students file in to the auditorium. They are oftentimes loudly joking and just plain excited about being out of class. Then the show starts and I begin to tell Anna’s story. I see my audience squirm, but many hide their discomfort by laughing and joking with their friends. This, for me, is a pivotal moment because I have to try to keep them focused and push through the discomfort.”

The whispers quiet. The side glances stop. All eyes are center stage.

“I’d like to give my mom and dad a hug,” Modrall says in the final scene. “But I don’t think I can do that now and I’m not going to the police! They would just take me to the morgue.”

For Roebuck’s part, she says, “Funding the play is, without a doubt, the most important thing our foundation does.” And it’s no surprise she feels that way when you see the thank you notes. In one, the adult writes, “There wasn’t a sound, not a peep from the 250-plus junior class. The principal told me the next day that a young man approached her to ask for help.”

Deana Brisbois’ friend Patrick Lucy sums up the power of the play. “On the day of Deana’s funeral, Deana’s father Ira explained that neither Deana nor her family ever fully appreciated the danger she was in. Ira was convinced that all individuals needed to be educated on the warning signs and perils associated with dating and domestic violence. With Deana’s Educational Theater we filled that need and continue to develop and distribute programming to educate individuals of all ages in an effort to keep them safe. Deanna would be proud.”

Lissette Campos is the director of community affairs for ABC Action News. Join the ABC Action News team on Oct. 1 for a special presentation of The Yellow Dress at the Straz Center for the Performing Arts.