Taking the Lead as Coronavirus Breaks: A look inside the first weeks of HCPS’s new superintendent 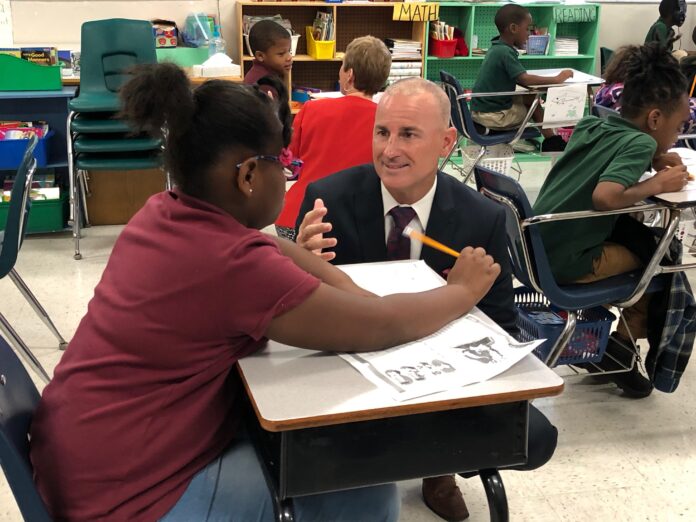 Becoming the new superintendent of the seventh largest school district in the country would be demanding during a slow week—but Addison Davis took the helm of Hillsborough County Public Schools as our district made decisions and created plans to deal with the effects of the coronavirus in our community.

Out of the frying pan and into the fire.

But how Davis led during that week spoke volumes of the type of person the Hillsborough County School Board chose to lead our schools.

In the early part of the week, Davis was part of our district’s plans for preventative measures as our staff delivered supplies like disinfecting wipes, hand sanitizers, soap and paper towels to our schools. Our teachers continued to educate children about reading, writing and math, while also educating them on the correct way to wash their hands.

Davis got to visit schools, which he loves. He enjoys watching and listening to what’s happening inside classrooms. He wakes up early to start his day at schools. He observes quietly, not wanting to interrupt the lesson.

During that first week, after visiting schools early in the day, Davis would head back to the main school district office to attend to business. He sat in meetings to listen and learn. At the end of many meetings he would give out his cell phone number to everyone in attendance. He wants to be easily accessible to any of his employees who need him.

Later in the week, as the coronavirus concerns ramped up, Mr. Davis made sure his top leaders had plans in action. He’s a very organized man who doesn’t shy away from delegating and deadlines.

He wanted action taken to ensure more soap and supplies in our schools–it happened.

He wanted an eLearning Contingency Plan in place, in case schools would have to close for an extended period–it happened.

He wanted protocols in place so every school nurse would have answers–it happened.

Mr. Davis also feels it’s important to be transparent. He took the lead during a 6:30 a.m. news conference informing our community about the closure of a middle school. He didn’t take the decision lightly knowing the impact on parents, but he made the decision that was in the best interest of our students and staff.

The Friday before spring break, when the Florida Department of Education made the decision to close all schools for two weeks, Davis was at every meeting and in on every decision. The moment he got off the conference call with the governor, he went downstairs to shoot a short video to put on social media for our families. Then, he sat down to write an email to families and staff explaining the decision and what it means for them.

He was one of the last to leave the building that day.

If we use our observations during that one, pressure-filled week to describe our new Hillsborough County Superintendent of Schools, we’ve learned he’s energetic, decisive and compassionate.  And his reign has barely even begun.

*Since this article was written, Governor DeSantis announced that all schools in the state of Florida will be closed until April 15 and e-learning will begin.

Florida's popular sales tax holidays are returning in 2022 like the Back-to-School Sales Tax Holiday, but here are some NEW ones that we know...
Read more
Ask the Doc

*Story updated in June 2022 to include information about the booster shot for children ages 5-11. When the Food and Drug Administration and CDC approved...
Read more
Life + Home

As the new school year begins, so does the constant stress of scheduling and planning your kid’s day. This includes figuring out what clothes...
Read more