A Heartful of Care: The Tiniest of Patients Get the Most Loving Care 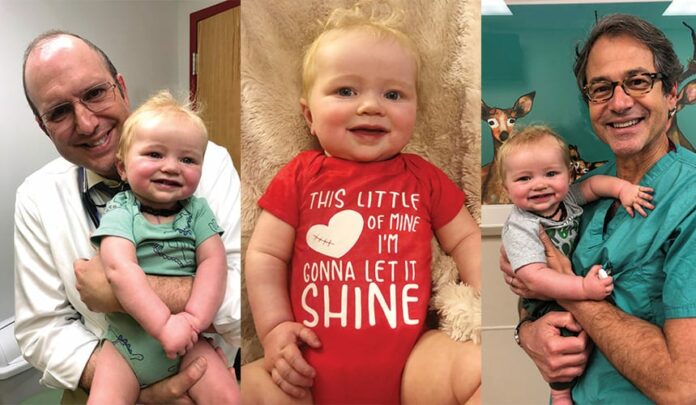 Remember taking our tiny newborns in for their first set of vaccinations and wincing (perhaps even tearing up) as they got their shots? Now multiply that catch in your throat by about a million and you might have an understanding of what Meghan Miller went through when her son, Brooks, was born less than a year ago with Hypoplastic Left Heart Syndrome, or “half a heart.”

Today at 9 months, Brooks has already had two open-heart surgeries and will have one more before he turns 5. However, he is not only thriving, he’s the visiting heartthrob of the pediatric cardiac unit at St. Joseph’s Children’s Hospital.

Miller (who has two other boys, Easton, 4, and Maverick, 2) says her first sign that something was wrong during her pregnancy was when an ultrasound showed that the fetus’ blood was going through the aorta a little too quickly. An appointment with Dr. J. Blaine John, a pediatric and fetal cardiologist at St. Joseph’s Children’s Hospital, revealed a diagnosis of aortic stenosis and hypoplastic arch. The decision was made to wait to intervene until after birth, but when the baby’s heartbeat was noticeably slower at Miller’s 38-week visit, it was decided to move the birth up.

As soon as Brooks was born at St. Joseph’s Women’s Hospital, the tiny infant was transported across the street by ambulance to the Pediatric Cardiac team. The original plan was to insert a catheter through his groin and expand his aortic valve through a minimally invasive procedure, but Dr. Jeremy Ringewald, pediatric interventional cardiologist and the medical director of the Cardiac Catheterization Lab at St. Joseph’s Children’s Hospital, made the discovery that not only was Brooks’ aorta too small, but his left ventricle was also too small for his heart to do its job.

At just 8 days of age, Brooks was going to have to undergo open heart surgery.

“We were going in one direction, and suddenly we were going to have to go in a completely different direction,” Miller says. “We had a much more serious condition we had to prep for. There were tears. [There were thoughts of] what’s life going to be like.”

While Miller processed the emotions, her husband, Ray, got to work, researching the best pediatric cardiac surgeons in the country. To their relief and gratitude, they found the name of the surgeon who would be doing Brooks’ surgery on that list, Dr. Victor Morell, co-director of the UPMC Heart and Vascular Institute and medical director of St. Joseph’s Children’s Hospital’s pediatric cardiovascular program. They also looked up Dr. Ringewald, who has pioneered interventional procedures in the area. They realized that the care they could have hoped for was right here in Tampa Bay.

“This is where we were supposed to be,” says Miller. “I was giving him to Victor. If you’re going to have to hand him off to anybody, it’s Victor.”

Miller is on a first-name basis with not only Dr. Morell, but just about every doctor and nurse on the team. She says they “love on” Brooks and display a genuine affection for her baby. From each clinician to the most renowned surgeons, everyone patiently answers all her questions, no matter how long it takes. Some staff have become Facebook friends. Some doctors gave her their cell phone numbers and encouraged her to call when she feels panicked or has a question. “They don’t mind me being crazy mom calling practically every day asking questions,” she says, gratefully.

And there were plenty of questions to ask. The first surgery involved joining the bottom of his pulmonary artery to the underdeveloped aorta to build a “new” aorta. This allowed blood to pump through the new aorta using the right ventricle. The second surgery (which is called the Glenn Procedure and involved detaching the superior vena cava from the heart and connecting it to the pulmonary artery) took place when Brooks was 6 months old.

At home, Brooks’ oxygen levels have to be monitored constantly and any drops in weight or the slightest sickness result in trips to the hospital. Some days, Miller deeply feels the tension and frustration of constant monitoring and uncertainty—a life unlike what they had expected to lead. The family has had to come to terms with the fact that Brooks will need extra care at least for the near future, such as feeding therapy, speech therapy and occupational therapy.

Other days, however, are just what they are meant to be when you have a cherubic 9-month-old in the home who naturally becomes the center of attention of any room he’s in. He’s not a fan of his car seat, but he adores his older brothers. He’s started to roll over, and if mommy leaves the room, cover your ears!

“It takes lots of prayer, family support and help from everybody,” Miller says. “It takes a team.”

Brooks’ next surgery will be in about three years, and Miller has already commandeered her favorite surgeon for the task. She asked Dr. Morell if he would do surgery number three.

In fact, the family is getting ready for one more big change before the next surgery. They are looking to move out of Brandon, where Miller grew up, to the Westchase area. Her parents live there, and her boys dote on their Nana. If that’s not enough reason to move, there’s one more attraction of their new neighborhood: They’ll be closer to St. Joseph’s Children’s Hospital.

Originally published in our April 2020 issue.

Starting a new school year typically comes with a range of emotions, from excitement to anxiousness, and kids might already be feeling this now....
Read more
Back to School

Sleep is a time to rest and recharge, but some children may not get the restful sleep they need. Whether this is because of trouble falling asleep or staying asleep, a lack of rest can lead to a variety of other issues, including poor performance in school and behavior problems.
Read more
Health & Wellness