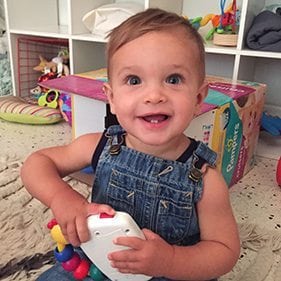 When Maggie and Ben Hall were told that their newborn son had a hole in his heart, the first-time parents were stunned. Amidst the confusion, they were assured that it was a common condition, one that would correct itself within a year. They were asked to come back in four months.

At that next appointment, they were told little Whitaker has a Ventricular Septal Defect (VSD) and an issue with a pulmonary valve, and were instructed to come back six weeks later, at which point the cardiologist who had been seeing him asked why they were there, recalls Maggie Hall.

That’s when a frustrated Hall asked for a second opinion.

Within an hour with Dr. Anna Bernus of Pediatric Cardiology Associates in Brandon, Whitaker underwent an echocardiogram that revealed a supra crystal VSD with mild pulmonary stenosis—a condition that would definitely entail open heart surgery when the baby was around age 1.

It was not until Hall met Stephen Langley, M.D., Chief of Pediatric and Congenital Cardiac Surgery at St. Joseph’s Children’s Hospital, that she finally relaxed.

“I immediately had peace,” she says of Langley, who would be leading Whitaker’s surgery a month from the meeting. “He put every nervous or anxious thought we had at bay. He answered all our questions. He told us one or two times, ‘we’re not trying to scare you, but we want to give you a full picture.’ He won’t sugarcoat things. He will tell you. He’s very honest, very sensitive.”

“We treat patients from minus 9 to 99,” says Langley. Even a fetus can be treated for cardiac conditions, and having heart patients of all ages centered in one institution means that care continues throughout the patient’s lifetime in one place, which is important—with more patients surviving congenital heart conditions well into adulthood, about 25 percent need repeat surgeries later in their adulthood.

Teamwork is key to quick recovery

“Our program—we’re different from everyone in the state,” Langley says, pointing out that while the mortality rate for children undergoing heart surgery for congenital heart conditions is about 3.5 percent nationwide, it is only 0.7 percent at St. Joseph’s Children’s Hospital.

Collaboration is key. Every patient who is about to undergo surgery is the subject of a weekly meeting during which the entire team that will be involved—from pediatric cardiologists, anesthesiologists, intensive care doctors and nurses and operating room nurses—is present to discuss the patient. Staff from Children’s Hospital of Pittsburgh of UPMC join in these meetings too.

“We’re making the right decisions before surgery in a more collaborative way,” Langley explains. “This style involves everyone. It’s important because it’s not just the surgeons and cardiologists that determine decisions that affect the patient. There are others, and input from them can be incredibly valuable.”

Around the country, 19 percent of all patients who undergo heart surgery are extubated (“woken up” from anesthesia) while still in the operating room. At St. Joseph’s Children’s Hospital, that figure stands at 75 percent. “It sets a steep trajectory toward recovery,” Langley says. “When a patient is breathing on their own, it is one less step for recovery once you get to the ICU. Once you have the momentum, it continues. It sets the course for rapid recovery.”

Langley also is proud of the hospital’s recovery period, which he believes is a surrogate for the overall quality of a congenital heart program; he says the length of stay here is less than half the national average.

The Halls can attest to that. Despite reassurances from hospital staff they would be home in a few days after the surgery if all went well, they figured it would take at least a week. Whitaker went in on a Wednesday for the surgery. The whole family was home in Lakeland by lunchtime on Saturday.

The future of cardiology is here

In America, Langley says there are 1.3 million adults living with congenital heart disease. Only 50,000 are getting the specialized care they need, even though treatment options are better than ever.

Children born with hypoplastic left heart syndrome (half a heart) 20 years ago did not have a very positive prognosis. Today, Langley explains that it is routine to operate on a newborn born with this complex heart defect. Following a series of operations, it is possible for these children to live remarkably healthy lives, he says.

Some children are born with a narrowed pulmonary valve between the heart and the lungs along with a hole in the heart, a condition known as Tetralogy of Fallot. This is treated surgically by enlarging the valve and closing the hole in the heart. As the child grows, the valve inevitably leaks and needs replacing before the heart grows dangerously larger and larger. Previously, the only option for these patients was undergoing another open-heart surgery to replace the leaking valve.
Today, because of a new medical device called the Melody Transcatheter Pulmonary Valve, doctors are able to replace dysfunctional valves in some instances without open-heart surgery. In less than four hours, a doctor can insert a catheter into a vein in the upper leg, and then guide the Melody Valve up to the heart, replacing narrow or leaky valved conduits. Dr. Jeremy Ringewald, a pediatric cardiologist at St. Joseph’s Children’s Hospital, performs more of these procedures than any other doctor in Florida.

“Children born with blocked or leaky heart valves usually undergo multiple open-heart surgeries before reaching adulthood to replace conduits that have worn out or that they have outgrown,” Ringewald says. “This groundbreaking technology can markedly prolong the time between surgeries for many patients, with the goal of maximizing heart health and minimizing invasiveness.”

While a leaky or missing pulmonary valve is relatively common in the world of congenital heart defects, other, rarer, conditions have also become more treatable. Ebstein’s anomaly, for example, is a tricuspid valve (the one between the right chambers of the heart) malfunction that was previously inoperable. People who suffer from this show damage not only in a valve, but also in the right ventricle of the heart. If the problem isn’t detected and fixed early, the only solution used to be a heart transplant. Now, Langley is one of a few surgeons that perform a specialized procedure to fix the problem before it gets out of control.

Surgeons today also can do cardiovascular procedures on younger and younger infants—even newborn and premature babies—prolonging tiny lives to lengths unimaginable even a decade ago. Langley performed a surgery in the United Kingdom on a 900-gram preemie.

“The fact that we can do more is not so much a testament to skill,” he insists. “The field is so much further ahead. We can do more complex operations on smaller and smaller children. The survival rate is much better. Twenty years ago, the mortality rate was more than 5 percent. Now, it’s 3.5 percent nationwide.”

Whitaker is one of the large percentage of thriving patients. Within a week of his surgery in September, he was back to crawling, opening and closing doors, pushing around the ottoman in his bedroom and celebrating his first birthday surrounded by an outpouring of love and help and attention from family and friends. Other than a diuretic, he has needed no medications after surgery, not even a painkiller. He will have a few checkups over the coming year, but after that, is expected to be fine with an annual echocardiogram. His only problem might be that, after undergoing open-heart surgery before turning 1, it’ll be tough to convince his parents of any other problems in his life, jokes Hall.

“We are overwhelmed and humbled by how he has recovered,” says Hall. “I hope even in a small way to give hope to people who are going through this.”