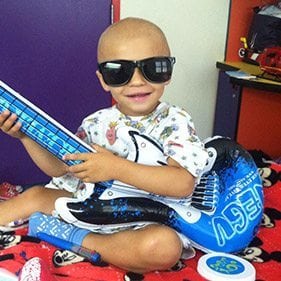 Xasha Ruiz and Kristina Reddy don’t really know each other. Ruiz lives in Land O Lakes, has two teenage kids and a 9-year-old stepdaughter, and runs her own cleaning business while she studies to be a Realtor. Reddy studied retail merchandizing and lives in Key West with her firefighter husband and two little boys. But both have something in common. They had to hear the words no mother wants to hear: that their child has cancer.

Thanks to a team of dedicated physicians and nurses, both mothers also are in the fortunate and growing group of those whose children are beating back cancer for longer—hopefully forever.

Ruiz’s daughter, Lizandra Ramirez, was a 17-year-old, straight-A high school junior when the discovery of a lump on her neck led to a diagnosis of Hodgkins Lymphoma. In four months, Lizandra underwent two surgeries, 17 days of radiation and five months of chemotherapy to remove the four tumors in her neck and chest. Ruiz juggled her daughter’s chemotherapy with her own full-time work and school. Today, Lizandra is a senior in high school considering a future in marine biology, as cheerful and bubbly as she used to be—and remained—before and throughout her treatment, reports her mother.

Reddy’s son, Liam, was an active 2-year-old toddler when he was diagnosed, almost out of the blue. Liam’s parents, Kristina and Stephen Reddy, were at St. Joseph’s Women’s Hospital. They had come up from Miami to deliver their second baby, for whom the prognosis had been poor from the start. As they were undergoing the heartrending process of delivering a baby who was not expected to survive long and saying their goodbyes, Liam was playing in Kristina’s aunt’s garden when her neighbor, who happened to be an oncologist, spotted him. She noticed his distended abdomen, which is a classic sign of Wilms’ Tumor, a type of kidney cancer that affects children, and suggested the toddler be taken to a hospital immediately.

Without telling Kristina because she was in labor at the time, her mother and aunt admitted Liam to St. Joseph’s Children’s Hospital. Once Kristina had delivered her baby, she checked out and rushed to her son.

That dizzying, bewildering day was the start of two intense years of treatments. Now, he’s technically in remission, says Kristina. His next procedure will be in Gainesville, where he will undergo high-dose chemotherapy with stem cell rescue, which means stem cells harvested from his own body earlier will be reinfused back into his body to rescue his bone marrow from the powerful and hopefully curative high-dose chemotherapy.

It’s a harrowing scenario for any parent to imagine, but both Ruiz and Reddy say that what helped them through it was the feeling that they were in good hands. Both children were treated at St. Joseph’s Children’s Hospital, where a new pediatric oncology facility offers state-of-the-art care in a cheerful, kid-friendly facility.

“That hospital is amazing,” says Ruiz, who slept in her daughter’s hospital room. “Everybody—staff, cleaning department, surgeons—everyone down to the receptionists—is super, super nice. It’s like my second home.”

The hospital is affiliated with the Children’s Oncology Group, a consortium of 300 hospitals worldwide. Dr. Mark Mogul, medical director of pediatric hematology/oncology at St. Joseph’s Children’s Hospital explains that this means that St. Joseph’s has access to the most state of art, novel best treatments available and care protocols, just as if the patients were being treated at Sloane Kettering or St Jude’s.

“It’s 100 percent clinical, dedicated to nothing but patient care,” says Mogul, who has been in the field for more than 20 years and who prides himself not only on his facility’s state of the art technology and science, but on the high level of personal touch. “Every need is immediately attended to. Everyone is expert. There is no middle person. No interns, residents, fellows.”

Mogul says that in the decades since he’s been in practice much has changed for children diagnosed with cancer—mostly for the better.

“What we cure now—we cure more than 80 percent—goes away and never comes back,” he says. “Every disease in pediatric cancer has a list of most state-of-art treatments.”

Treating children has other benefits. Children have a 95 percent chance of getting on a national trial program for a new treatment. For adults, that likelihood stands at 4 percent.

“In pediatrics, our patients are healthier,” Mogul says. “We’re going for a cure.”

Mogul and his colleagues see patients from newborns to age 21. Leukemia patients are seen up to age 30; some till age 50. He’s also very interested in working with the AYA group—Adolescent and Young  Adult—who he says have historically done relatively poorly because they are treated with a more adult patient view to control rather than cure the disease.  Mogul sees some patients well into their 40s and 50s.

“It’s both wonderful and awful; way more wonderful than awful,” he says. “We take losses hard. Irrespective of outcome, we make such a difference. I tell parents, the only thank you is when they’re old enough to get married, I expect an invitation.”

At 4, little Liam is a few years away from issuing wedding invitations and his mom is still the main lady in his life. In fact, when Mogul recently came into the room to tell the Reddys the bad news that Liam had relapsed, Kristina burst into tears. Furious that the doctor had made his mother cry, Liam ordered Mogul from the room.

That’s why she has to control her emotions better in front of her son, Kristina admits. But it’s hard; hard to tell her son he can’t start VPK like he was so excited to, or watching him cry as she gives him his nightly shot. It’s also hard not to get emotional, albeit in a good way, when Liam plays with his baby brother, Houston, and goofs around like a typical 4-year-old boy, or when Stephen’s firehouse officers and family members rally around to surround the Reddys with love and support.

“It isn’t fair, but we’re going to get through it,” Reddy says. “It could always be worse.”

For Mogul, seeing families through those hard times is not just a professional obligation. “I tell every family—this is your child but now that they’re here, they’re my child too,” he says. “We live that. It’s what we’re here for.”

For more information on the diagnosis and treatment of childhood cancer and other blood disorders, visit StJosephsChildrens.org.