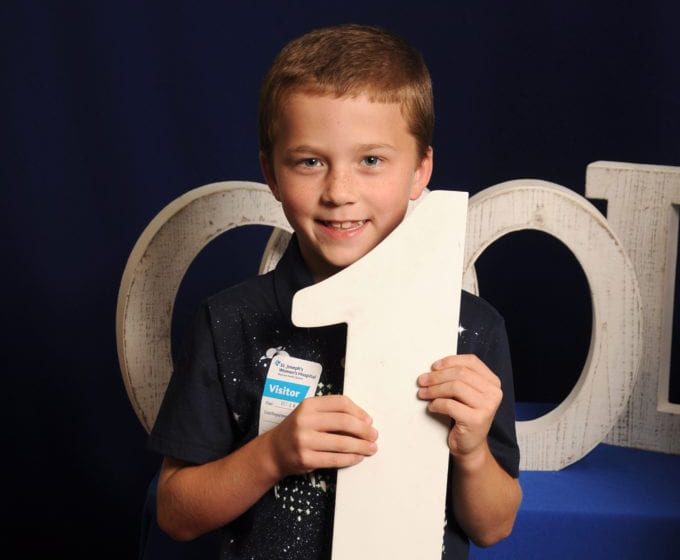 St. Joseph’s Women’s Hospital leads the way with therapeutic cooling and its miraculous effects on newborns with brain injury.

Titan Latimer is of average weight, a bit above normal in height. The 7-year-old is in first grade but reads at a third-grade level and does math at fourth. He loves LEGO Robotics, his school’s Chef It Up program, and baseball. He adores his older half-brother and sister, Brandon, 17, and Diana, 20. Though he’ll still run to hug his parents, he prefers to shower mom with kisses only when his friends aren’t around.

He’s practically perfect, which could never have been predicted by the circumstances of his birth.

When Samantha Latimer gave birth to her baby boy, she heard the Code Blue and knew instantly something was wrong. Titan was whisked away from her, giving only the slightest whimper before being rushed to the NICU. When she was finally able to see him, Titan was intubated, needles inside his tiny body. “I wouldn’t wish that on my worst enemy,” she says now.

Titan’s umbilical cord had been wrapped around his neck during a four-hour labor, resulting in oxygen deprivation to his brain. The condition could have doomed him to a variety of developmental setbacks, including cerebral palsy, difficulties with language and motor function and a lifelong necessity for physical, occupational and speech therapy.

Therapeutic cooling is a process by which a newborn who has suffered moderate or severe brain injury is placed on a temperature-regulated blanket. A probe placed inside the baby then monitors the baby’s core temperature as that internal body temperature is gradually lowered by a few degrees. The baby stays in a “cooled” state for 72 hours and then undergoes a slow rewarming to get body temperatures back up to normal. During the entire process, there is a one-to-one ratio of specially trained nurses who observe the babies around the clock. The baby is continuously evaluated by multiple different modalities –  head ultrasound and brain MRI, continuous electrical monitoring of the brain with special seizure detection software and frequent laboratory evaluation to name a few. Supplemental experts—radiologists, pharmacists and neurologists are available for consultation and to lend their expertise. While it’s not entirely understood exactly why or how it works, cooling seems to do so best on babies who present with moderate brain injury caused by oxygen deprivation. For those with mild injuries, the protocol is to monitor and only occasionally cool. For those with severe injury, the damage has been done and cooling is still performed but is less likely to be of significant benefit. Vargas says cooling helps to slow down brain metabolism and reduce acid buildup and inflammation occurring as a response to the initial brain injury – all of this helps to decrease the likelihood of further brain injury and allow for the brain itself to start healing.

“Following cooling, we see babies who have had phenomenal success,” Vargas says.

However, cooling works only if is initiated within six hours after birth. This is why it is critical to get babies started on this treatment at once. To this end, Vargas emphasizes training and spreading the word through hospitals and birthing centers. St. Joseph’s is the only local hospital that provides active cooling on transport, whether the baby is transported via St. Joseph’s Children’s Hospital’s Neonatal and Pediatric Transport ambulance or helicopter. The specially trained transport staff act as the physicians’ ears and eyes on the ground to help identify candidates for this therapy at outlying hospitals.

Titan was the first “cooled” baby at St. Joseph’s Women’s Hospital. Vargas just treated the hospital’s 106th one. Every other year, the hospital has a party that reunites the members of this very unique club.  “It’s a massive boost to our morale,” Vargas says of these events. “It reinvigorates us. It not only makes us want to continue cooling but also ask, what can we do to make it even better.”

As for Latimer, she’ll always be grateful for the emotional and informational support she received from the St. Joseph’s Women’s Hospital NICU team. They hugged her, kept her informed every step of the way and stayed positive while they worked magic on her son. She knew that no matter what, she would love the baby that nurses nicknamed “Fighting Titan” on his crib’s name plate. But this miraculous outcome is not something she will ever take for granted. “He’s just amazing,” she says. “I couldn’t be more blessed.”