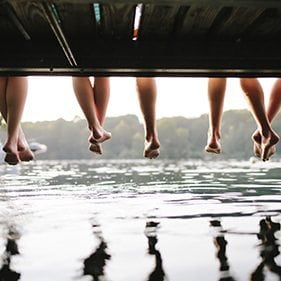 In our world of constant connectivity, some might argue that kids shouldn’t be expected to “unplug” for weeks on end. And yet most overnight summer camps are still tech-free zones.

“Many of our campers actually thank us for the opportunity to put away their phones for a while,” says Erec Hillis, boys’ camp director at Camp Champions in Texas.

Nonetheless, it can be daunting to think about letting the smartphone, iPad and laptop go untouched for the camp session. And parents may feel just as anxious as their kids. After all, we’re used to communicating with our children whenever and wherever the notion strikes. What to do?

First of all, it helps to know why most camps remain unplugged. Kevin Gordon, director of Camp Kupugani outside of Chicago, says, “because the whole point of our camp is to enjoy nature, facilitate communication, and empower children by developing those skills, we don’t allow cell phones or iPods, which diminish interpersonal interaction.”

Gordon says there’s solid evidence to support this view, and points to a recent study from UCLA in which a group of sixth graders unplugged for five days at an outdoor camp. This group showed marked improvement in their ability to accurately read nonverbal emotional cues when compared to a control group of same-age students who hadn’t yet been to camp. While the researchers did not dismiss the value of technology as a communication and learning tool, they concluded that “digital screen time, even when used for social interaction, could reduce time spent developing skills in reading nonverbal cues of human emotion.”

It is through face-to-face encounters that kids gain the ability to see another’s perspective and develop empathy. They learn to cooperate and contribute. All this is important in the cultivation of lasting friendships. In his book, “Homesick and Happy: How Time Away from Parents Can Help a Child Grow,” psychologist Michael Thompson contends it is because campers spend so much time together that “camp friendships grow so quickly and deeply.” The camp environment itself inspires face-to-face interaction. Campers eat, sleep, and play in proximity to one another.
“Kids want to interact with one another,” says Hillis. “Camp allows kids to be near enough to each other so that they don’t need their phones. They can just walk over and start a conversation.”

Still, it’s a good idea to prepare your child for the tech-free experience. You may simply inform him of the “no electronics” rule, and express your confidence in his ability to abide by it. Hillis reminds parents not to commiserate with a child who seems reluctant to give up his device. Just remind him that all campers will follow the same rules, and that the camp has good reasons for being tech-free. As Hillis says, “we simply want kids to be comfortable in knowing that they can turn the phone off for a period of time and perhaps enjoy life even more richly, rather than feeling that they are missing out on something.”

Gordon recommends experimenting with a tech break of a day or two, sometime before the start of camp.

“Do it as a family and recognize how (after perhaps an initial shock), it’s actually fun and you feel more connected as people,” he says.

He also suggests discussing how your camper can deal with homesickness, and how you’ll keep in touch without devices. Many camps now offer one-way email; parents send email, which is then printed and delivered to campers by the staff. However, Gordon favors old-fashioned snail mail, and says email, “though easier for the parent to send, is generally not as appreciated by the camper.”

In fact, experts like Thompson recommend letter-writing as the primary form of communication between parent and camper. In “Homesick and Happy,” he writes that “the time spent between sending and receiving a letter is a valuable opportunity for both parent and child to think about one another without having to do anything with or for each other.” He believes a child cannot become independent without spending time away from parents, and warns that “minute-by-minute contact with parents undermines the sense of separation.” So don’t be the parent who slips an extra phone into your child’s duffel!

Gordon acknowledges that being disconnected from screens is more difficult for parents than for campers.

“It’s also a different experience (and harder), since the parent is in their same world, while the camper is busy in a new environment,” he says.

Yet parents would do well to practice some tech “downtime” for the duration of the camp session. Thompson writes, “my advice: Stop the emails. Just send one or two packages per summer and give yourself a break from checking the camp’s online photos. Go buy some stamps and write a long letter or two or 19.”

Losing the technology will foster a happy summer. A 14-year-old camper from Circle F Dude Ranch Camp says: “We spend too much of our time looking at our screens and being worried about what we are missing out on. It was scary to not have my phone at first and I was upset, but after a few days I forgot all about it. It was really an amazing feeling to not be worried about Facebook. I felt free to enjoy the friends I had with me.”

During the weeks at summer camp, your child will make new friends. Every day, she’ll eat, bunk, play and share adventures with them. She’ll have heart-to-hearts—face-to-face. True, she may use social media to stay in touch with her camp friends throughout the year. But memories of the things they did together—tipping the canoe, singing by the fire, playing pranks on the counselors—will create the strongest of bonds. She’ll yearn for next summer when she can ditch the smartphone and wrap her arms around her forever friends.

Ashley Talmadge is a freelance writer who lives in the Pacific Northwest with her husband and two young sons. She enjoys writing about the many facets of parenthood, and her work has appeared in dozens of parenting publications throughout the United States and Canada.