Getting to Know: Laurie Schacht, Chief Toy Officer at The Toy Insider 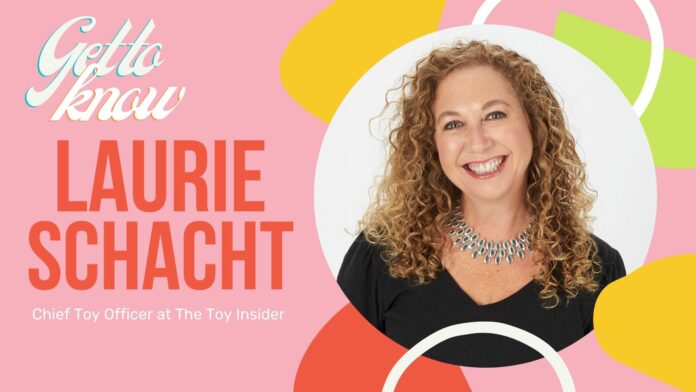 The team at The Toy Insider has what is arguably the coolest job ever: to play with and test thousands of toys each year, narrowing down a list of favorites to help parents like you find the perfect gift.

Like many of us, The Toy Insider had to make the ‘pandemic pivot’ by taking their popular Holiday of Play event virtual to announce the Top Toys for the 2020 holiday season. This is where we caught up with The Toy Insider’s Chief Toy Officer Laurie Schacht, a mom of three who now calls Southwest Florida home.

In true COVID fashion, we Zoomed with Schacht to find out what it takes to put together their annual Holiday Gift Guide and how she got her start.

Laurie, before we dive into the top toys, we want to learn more about you and The Toy Insider and how it works.

Schacht: The Toy Insider is a guide. We update our website all year long, but for the holidays, we have a print edition as well. It is all about being the most important resource for parents who are searching for the perfect gift for their kids and any adult who is a gift giver for children in their lives, so our list is broken down by age. We also break out a Hot 20, a STEM 10 and a 12 Under $12.

The whole Toy Insider team, we’re a group of editors who are looking, reviewing and playing with toys all year long. [It’s] not a bad job to have, but I will say it is tough work narrowing it down to a list.

How did you get your start in what is probably the most FUN business ever?

Schacht: I actually grew up in the toy business. My father had been a publisher of a trade magazine called Toy and Hobby and then in 1983, he started The Toy Book. For the last 18 years, I have been the Chief Toy Officer for The Toy Book and then we launched The Toy Insider about a year and a half later.

You and your team review thousands of toys every year! How do you narrow it down? What’s your criteria for a top toy?

Schacht: Play value is one of the most important things, but we look at the integrity of the toy, the ingenuity—is it new? Everything on the Toy Insider list is new (as of at least 2019). We also look at how much does this toy cost at retail and is it worth it? It’s not easy to make a decision. There are a lot of things that go into what is going to be on that final list.

This year was a bit different for your team as you had to begin working remotely. What has that been like for you all?

Schacht: We play with quite a few toys, and it’s funny. In a normal world, we’re in the office and I’ll hear hootin’ and hollering in our conference room and it’s because my team is having so much fun toy testing that I know they found a winner.

This year it was a little more challenging. We’re doing a lot of virtual demos. We did get to see everything in October and again in February—we do go to shows where we get hands-on even if a product is not ready, even if we’re just playing with a prototype or an early sample. And then the toy companies, since they’re not sending to every single one of us, they’ll send us a few samples to test and to check out.

We found a whole new appreciation for toys this year. How do you think it will impact the toy selection this holiday season? We’ve seen a lot of nostalgic type characters on your list like Super Mario Bros Lego sets.

Schacht: That one is fun! Even games like Twister are back. There’s a new game of Operation out that’s a pet version which is a lot of fun. I think that parents have discovered playing games with their children is fun; it’s fun for everybody. There’s one called Drone Home that’s a hoot. There’s a game called Hands Full: I want you to think about Twister, but 2.0. And also, people discovered puzzles this year. Crafts have also been a huge item that have done really, really well.

Anything else you want to add?

Schacht: It’s important to remember to not get caught up in the hype. Know your child and the kids you are buying for. Use us as a guide. We look for things for all children who have all kinds of different interests.

The Toys: Our top picks from the Toy Insider’s 2021 Holiday of Play