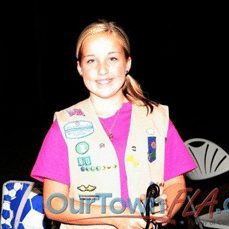 Julia has been a girl scout since she was 5,she has played soccer (competitive and rec) since she was 4,she does well in school,helps around the house ,and even cooks!! She is a special Girl Scout,she raised money and donated it to “Treats for Troops” to help pay the shipping costs of packages sent to military.She has been a stong advocate of Girl Scouts being able to shoot firearms,she has been on the gun focus group for Girl Scouts of West Central Fl.She love the water and looks forward to summer camp at Camp Scout Crest every summer!She loves to help with other scouts as well and looks forward to being a counsler in training at camp,and work at camp when she is old enough.

Extraordinary Girl Nomination Well just moving from Michigan 7 months ago was an exciting adventure for her, not only did she had to make changes...
Read more