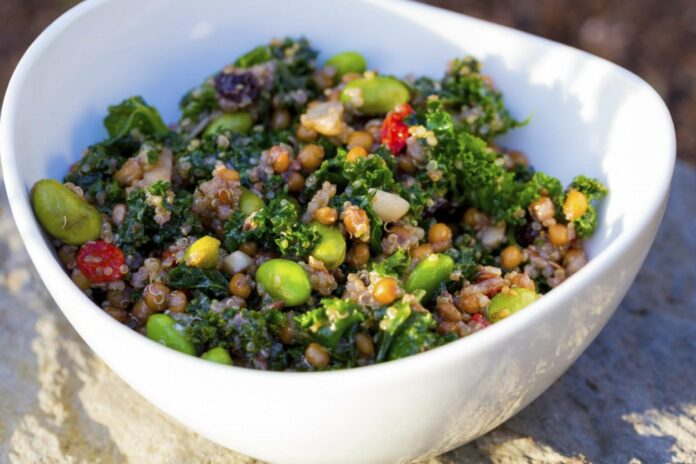 As many grocery lists and menu plans parents make, once in a while, life gets in the way and you have to throw together a meal for your family. Often it’s easier to turn to take-out or pre-packaged frozen meals loaded with sodium. But preparing a healthy meal in a time crunch doesn’t have to be time-consuming. Kale, quinoa and potatoes are 3 ingredients that can be used in a variety of ways and that you can throw together in a pinch.

Preheat the oven to 400 degrees. Slice the potatoes as thin as desired. For an option that’s lower in starch you can also use radishes, but you are probably less likely to have those lying around. Remember the thinner the slices the crispier the potatoes will get ion the oven. Lay all the slices flat in a 13×9 glass dish. If the slices overlap a little that is ok. Drizzle some olive oil and sprinkle salt and pepper to taste over the potato slices. Place the dish in the oven and cook for 12 minutes or until light golden brown. Place 1 cup uncooked quinoa in a pot with 2 cups of water and bring to a boil. Once the quinoa is boiling, bring down to a simmer and cover. Let the quinoa cook until all the water has been absorbed, or about 12 minutes. While the quinoa cooks, heat a teaspoon of olive oil in a saucepan on low heat. Toss in the shredded kale and cook until lightly toasted and crisp. This will add a nice texture to the salad. Once the quinoa, kale and potatoes are cooked, put them together in a bowl and toss with pesto and grated parmesan.