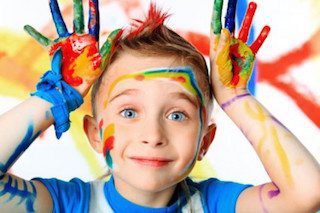 As a child and throughout my teen years, I unwillingly earned the title of “unorganized.” Yes, I was a messy kid, but the more I was referred to as, “the messy one,” the more I realized there was a negative stigma attached to that title. As I became an adult, I developed a short- lived, inferiority complex because I thought I had to be as organized as everyone else.

Why? Because society directly correlates being organized and neat to reliability and success. However, my messiness never interfered with my success. It has always been an abstract version of organized. Meaning, I still knew that I left my hairbrush in the garage instead of putting it in the bathroom drawer.

I like to think that this was my creative way of not putting things back where they “belonged.” Even though some of my items didn’t have a consistent, designated spot all of the time, I always knew where I had put my things. I then began to realize that I was not alone on this.

As a creative person, messiness comes with the territory. They say that messiness is often associated with artistic, creative and scientific or mathematical genius. Consider Albert Einstein for a moment, he once famously questioned, “If a cluttered desk is a sign of a cluttered mind, of what, then, is an empty desk a sign?” Or Steve Jobs, inventor of Apple Computers, his office looked like someone broke in and ransacked his desk looking for competitive information.
Not convinced yet? Let me give you one more example, Mark Twain. He was notorious for being a slob and having a pig stye for an office, yet he has been revered as one the most creative and imaginative writers of his time.

Psychological scientist, Kathleen Vohs, from the University of Minnesota, and a few of her colleagues conducted a study on the speculations that messiness, like tidiness, might serve a purpose. Vohs stated, “Since tidiness has been associated with upholding societal standards, we predicted that just being around tidiness would elicit a desire for convention. We also predicted the opposite: that being around messiness would lead people away from convention, in favor of new directions.”

The research has received a lot of media attention, and Vohs conclusion may astound you. “I think it makes people feel vindicated,” she says. “There’s a multibillion dollar industry to help people de-clutter their lives. Relationship partners, employers, everyone wants you to be neat … but there may be times being messy is good, too. I think messy people feel vindicated big time.”

Now, let’s not get carried away. I’m not implying that it’s acceptable to teach your kids to be careless with their things and unorganized. Nor am I stating that, if your child is very messy that they are a creative genius. However, it is important to implement individual, organizational systems that work for each family household. It is also helpful to encourage your child’s creativity by allowing a messier play space.
Here are some tips to help teach your kids to connect with the creative artist within, but also to make sure that the mom “within the house” doesn’t go nuts!

Find a dedicated area in the house for your arts and crafts projects. This will teach your child to keep their art supplies organized so that they can get messy with the paints and markers later during creative time!

Experiment with your creative space. Let your children create arts and crafts in a messy space and also in a tidy space. For example: provide them with a piece of construction paper, randomly scatter the art supplies on the table, and encourage them to draw or paint a picture by using their imagination. Next time repeat the same activity, except provide the same art supplies in organized bins. The goal is to see if one creative space tidy or messy, influences their creative juices.2) Don’t Plan on it!

Don’t always stick to the planned project. Allow your child to express themselves artistically, by choosing their art project. Remember, art is about imagination, expression, and fun. You don’t always have to follow the step-by-step instructions for a project. Try throwing the instructions out once and see what your kids creates by using their imaginations. You might be surprised!
Keep in mind, your children don’t always have to color between the lines either. They can paint apples purple, and monkeys green, lions can wear hats and crocodiles can climb trees. That’s what makes it so interesting and exciting for kids. Allowing your child the artistic freedom opens them up to new ideas and creative explorations.
Encourage your youngsters to try new and different ways of doing things. If your child seems stuck on what to create, inspire their imaginations by asking, “I wonder what would happen if…” This will most likely give them the thought-provoking idea they need to decide.

3) “I Did It!”
You can boost your kids creative confidence by allowing them to create the projects on their own. If they ask you to “make it for them,” reply that you’d love to see what they create. It’s important that your child begins to use their unique ideas when expressing themselves through their art.

5) Musical Inspiration
Adding music to your child’s arts and crafts time can enhance their creative experience and help influence their moods and imagination. Try different types of music and see which genre your child likes the best!

Remember, arts and crafts not only helps children express their thoughts and ideas, but it also strengthens their imaginations and encourages them to become more creative. Allow them the artistic freedom to explore new things and this will build their self-esteem and confidence.
Finally, don’t always follow the step-by-step instructions on all your projects with your kids. Let them create a masterpiece with their minds. Just like life, art can get a little messy at times, and it’s not always perfect, but that’s what makes it so interesting to observe and so exciting to create.

Jill Assalti is a proud mother of two young boys. She ran track at Florida State University for two years and then earned her Bachelors of Arts Degree with honors from the University of South Florida. She is a Florida native but spent her earlier years working in Miami, New York, and Los Angeles as a professional actress, writer, and singer.

She is currently a Motivational Speaker focusing on helping people find their “Life’s Purpose.” She also teaches “Transform Your Life Through Positive Thinking” and The Power of Thought” to name a few. Jill is a published author and tv personality in Tampa Florida. To see more of her inspirational articles and to find out more information.

You don't have to be a penny pincher to want to take advantage of a free or cheap deal every now and then. We don't...
Read more
Health & Wellness

How to plan your visit to Caladesi Island, one of America’s Top 10 Beaches

Caladesi Island has long been one of our favorite family-friendly beaches in Tampa Bay and it's among the beaches we always recommend first when...
Read more