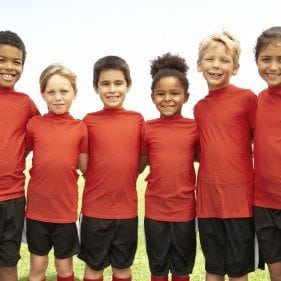 Like most kids his age, Eric O’ Neil loves sports.

The 10-year-old regularly plays soccer, basketball and baseball every chance he can. “I love that he is athletic,” says his mother Carlinda O’Neil of Largo. “But I’m always worried about him getting hurt.”

Two years ago, during one of Eric’s soccer games, Carlinda watched as her son endured an elbow to the head as he tried to kick the ball to another player. Carlinda immediately removed him from the game.

“It didn’t look that serious, but he told me he had a headache,” recalls Carlinda of that summer day in 2012. “My son never gets a headache. I thought he may have a concussion, so I took him straight to the doctor.”

Luckily, a CT scan confirmed Eric hadn’t suffered a concussion, but Carlinda says it was enough for her to sideline the young athlete several days.

“He got mad, but I didn’t care,” she says. “When you play sports there is going to be physical contact no matter how careful you tell them to be; it’s going to happen. As a parent, I have to do my part to protect my child. I’m just glad that it wasn’t as serious as it could have been.”

A concussion is a type of traumatic brain injury (TBI) that results from a bump blow or jolt to the head that causes the head and brain to move rapidly back and forth, damaging the brain cells and creating chemical changes in the brain.

Concussions among professional football players have made headlines around the country. But concussions among children are on the rise and can lead to devastating consequences if left untreated.

“Children’s brains are still developing, so they are more susceptible (to concussions) than adults and they take longer to recover,” says Dr. Kevin Elder, a family and sports medicine physician with Baycare. “Children can’t verbalize how they feel and what’s going on with them. They can’t describe what’s happening, which can make treatment a little more challenging.”

An estimated 30 million children and teens in the United States play organized sports, according to the Centers for Disease Control and Prevention. Last year, 1.24 million children were seen in emergency rooms with sports-related injuries, according to Safe Kids Worldwide, a global organization dedicated to preventing injuries in children.

Dr. Elder says parents need to stay vigilant and make sure their children wear the proper safety gear when playing sports. Parents and coaches also need to make children aware of techniques to avoid on the field, such as leading with your head in a football game.

If a parent or coach witnesses a child suffering any type of blow to the head, no matter how small, immediately remove them from the game.

Concussions affect children differently. Some will have symptoms that last a few days while others can last for weeks or months. These symptoms may not only affect the child on the field but in the classroom as well.

“Parents need to be very alert to any changes in their child’s behavior,” says Dr. Elder. “Any signs of dizziness, nausea, vomiting, headaches, blurred vision, difficulty concentrating or paying attention or if a child begins to act strangely or different than usual, immediately take them for an evaluation.”

Sports injuries in children cannot be completely eliminated, but they can be lessened.

“We need to focus more on [playing] technique and wearing the proper equipment,” says Dr. Elder. “And we need to make sure we get a child help immediately if we think he may have suffered a concussion.”