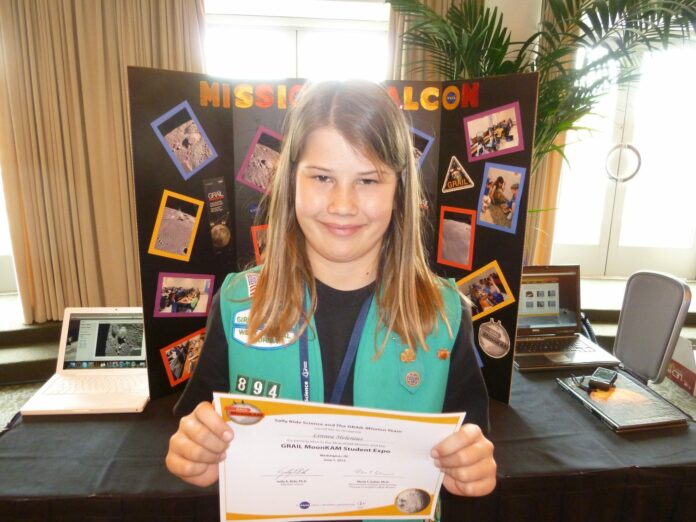 I would like to nominate my daughter, Linnea Helenius, to be an Extraordinary Girl for Tampa Bay Parenting magazine. Of course to her parents, every girl is extraordinary. But I think you will find Linnea to be extra-extraordinary in the following ways. She excels academically, athletically and in community service.

Linnea is a rising 6th grader who was on the Principal’s honor roll (straight A’s) for the entire year and is a walking example of girls excelling in STEM. She was selected to be a member of her elemenatry school’s Math Bowl teams in both 4th and 5th grades, and they advanced to the district finals each year. Linnea was also selected to participate in the GRAIL MoonKAM Student Expo in Washington, DC in June. The expo and project were sponsored by Sally Ride Science and NASA’s GRAIL (Gravity Recovery and Interior Laboratory) Mission Team. Students in her school’s 4th and 5th grade Academically Gifted Program participated in the MoonKAM Mission by performing experiments and requesting the GRAIL spacecraft to make certain photos of the moon’s surface, which were then electronically sent to the students. Linnea, her teacher and another student then represented the school and state at the science fair-like expo, in which Linnea explained their experiences and what they had learned to a distinguished group of guests, including Ms. Lori Garver, NASA Deputy Administrator, Dr. Maria Zuber, professor at MIT and principal investigator of the GRAIL Mission, Dr. Leland Melvin, former astronaut and NASA Associate Administrator for Education, and Dr. John Holdren, the President’s Science Advisor. Linnea was very poised and articulate, once prompting a NASA visitor to remark, ”You know more about the Apollo moon missions that most people at NASA.” Her future plans include being an Environmental Engineer.

Linnea also participates in several sports. Soccer is her favorite sport, which she has played for 6 years, and she also participates in basketball and volleyball. She intends to try out for several sports in middle school next year. In addition, Linnea was chosen to be a Peer Mediator at her elementary school. These students are trained in conflict resolution and leadership. They also help out at many school functions, like monthly student recognition ceremonies and with fundraisers.

Linnea has been a Girl Scout for 5 years, starting as a Brownie and just completing Juniors. She and her troop mates earned their Bronze Award, the highest award a Junior Girl Scout (grades 4-5) can earn, which requires girls to learn the leadership and planning skills necessary to follow through on a project that makes a positive impact on their community. Working towards this award demonstrates their commitment to helping others, improving their community and the world, and becoming the best they can be. Their project was to help displaced women and children served by the Mary and Martha House in Ruskin by raising funds to provide a new commercial-sized washer and dryer for their shelter. The girls learned a lot about working together toward a goal, involving the community, and overcoming obstacles by doing this project.

I appreciate your consideration of my nomination of my daughter, Linnea.

Extraordinary girl nomination Katherine (KC) is a Lakewood High School student in the environmental studies/marine science program. She is passionate about the outdoors and the...
Read more