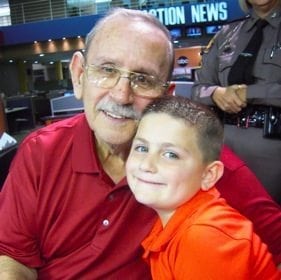 At 4 feet tall, 6-year-old Anthony Temples was the “little guy” in his group but in an instant he became the hero!

It happened on a Saturday night in Lakeland during a family reunion. They had just finished dinner at the Cracker Barrel when his poppa collapsed in the parking lot. Pete Cross, 71, was having a massive heart attack. While the adults in the group – 30 in all – ran over to Cross, Anthony ran in the opposite direction!

The first grader darted past cars, burst into the restaurant, and bolted over to two strangers having dinner. His instincts told him that they would know what to do! He was right.

The strangers were Florida Highway Patrol Troopers Cynthia Cayce and Teresa Hill. They had walked in to the Cracker Barrel a few minutes earlier. Anthony was the only one who noticed. During his live television interview on ABC Action News’ Positively Tampa Bay segment, he recounted what happened.

Anthony: “I runned in there and told them my Poppa is havin’ a heart attack!”

Campos: “What happened next? What did they say?!”

Anthony: “Um, they looked at me funny.”

Trooper Cayce remembers it differently. There was nothing funny about it. “I thought for a child to approach two uniformed officers and ask for help like that something must be terribly wrong!”

The chain of life had begun. Within seconds, Cross’ heart attack was under attack by the troopers.

“As I was running out to the parking lot, I was on the radio asking for an ambulance to be sent to our location,” Hill says. With little Anthony in the lead, they reached Cross in seconds. Slumped over and still inside his truck, he was blue. “We immediately placed him on the ground and I began to give Pete mouth to mouth,” Cayce recounts. “I actually performed the chest compressions as Trooper Cayce administered the breaths to Mr. Cross,” Hill adds.

For eight minutes, the horrifying scene played out in the parking lot.

Anthony’s Poppa flat-lined, was revived and then a screaming ambulance took him away.

“While performing CPR, we had a lot of his family and friends standing there watching us,” Hill says. “Afterward, it was a very emotional moment. We followed the ambulance to the hospital and stayed until we were informed he was stable.” Hill described that moment as one of the most worthwhile of her career. “I look at my job as a trooper a little differently now.”

“They followed us to the hospital and stayed until the doctors told them I was going to make it,” says Cross, still brimming with emotions. “I see state troopers a lot and now I thank them each time for their knowledge and quick reactions.”

Asked about his grandson, Cross is unabashedly proud. The little boy he took care of daily from birth is a hero – his hero.  “For two years it was me and Anthony every day. I fed him, changed his diapers and took him to the doctor or anywhere he needed to go. … I bought a new truck just so he did not have to ride backwards in the front seat,” Cross says. “We have a bond that I feel will never be broken and maybe that’s why he was so determined to find me help.”

Every 36 seconds someone in this country dies from heart disease. That’s nearly half a million killer heart attacks per year. Cross was well on his way to becoming a statistic. His grandson and Troopers Cynthia Cayce and Teresa Hill stopped that from happening.

It’s no surprise the pint size hero wants to be a state trooper when he grows up and that Cayce and Hill are nominated for Florida’s statewide Trooper of the Year award!