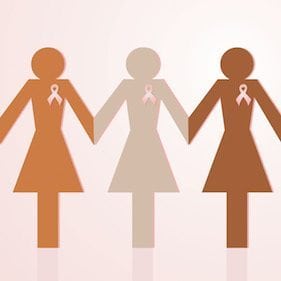 As a busy working mom, like so many of you, I almost skipped my scheduled screening mammogram. After all, I’d had one six months prior. I was busy with work and the kids, and I was working on my first book. There was just too much going on. But that little voice inside my head spoke loudly, “Just go. Be smart.” I did. That’s when doctors found my breast cancer, and it was slowly starting to spread.

Since my diagnosis and surgeries, I’ve become an advocate for early detection and breast cancer screenings. They certainly saved my life and saved me from having to go through radiation or chemotherapy. I’m proud this year to join forces with the American Cancer Society, The Seminole Tribe of Florida and The Seminole Hard Rock Hotel and Casino to raise awareness of the disparities between ethnic and racial groups when it comes to early detection.

The national walks happen in October but it’s now – in the heat of August – that teams form and participants start registering. As you read this, bay area moms are recruiting daughters, sisters, girlfriends and more for Making Strides against Breast Cancer walks scheduled in Hillsborough, Pinellas, Pasco and Polk counties.

This year, the American Cancer Society is zeroing in on disparities when it comes to early detection. African American women have a higher incidence rate of breast cancer before the age of 40 and are more likely to die from the disease. In contrast, white (non-Hispanic) women have a higher early detection and survivability rate, despite have more cancer cases! Last year alone, about 232,000 new cases of invasive breast cancer were diagnosed in women, according to the American Cancer Society.

According to The National Cancer Institute, American Indian and Alaska Native women had the lowest reported rates of breast cancer among all U.S. ethnic groups between 2002 and 2006, but their rates of death from the disease was higher than Hispanics and Asian Americans during the same period. Why? It could be that American Indian and Alaska natives are being diagnosed at later stages.

I reached out to Seminole Tribe elder and fellow breast cancer survivor Nancy Frank who told me many Native American women do not take advantage of the screenings. Nancy believes that the majority of women are either shy or embarrassed. Others due to their traditional upbringing have been restricted from doing these things. (Their bodies are sacred.)

Nancy found her cancer in a most unusual way: after a car accident. The air bag deployed and hit her chest. Her chest bruised and doctors recommended monthly breast exams to monitor the injury. A year later she started having pain on the opposite side of her chest. Nancy describes it, “like electricity running up and down my shoulder and toward my chest.” Doctors ordered additional tests and that is when they discovered her breast cancer.

When Nancy heard the news, she says she “felt like my life was over. I couldn’t tell anyone because no one knew how I felt. I was alone having no one to talk to, no one that would understand how I felt or what I was going through.”

This is why Nancy is sharing her story now, and why I am focusing attention on disparities within our diverse and wonderful ethnic communities. No one should feel alone, and we should all have someone to talk to especially if it concerns our cultural differences.

Nancy says her kids gave her the strength to fight. She realized they needed her. “I realized I needed to be strong to fight it and to survive.”
Now she’s become an advocate for other women in her tribe. “I can’t express it enough that it is so important to get mammograms.  I talk to our young ladies, to my sisters, my nieces and nephews, too. Get annual exams.”

I couldn’t have said it better myself.

Linda Hurtado is an anchor for ABC Action News and a breast cancer survivor. Join her in October when she emcees the kickoff of the Making Strides walk, set for 9 a.m. Oct. 18 at the Tampa Bay Times Forum. To register and learn more, go to https://www.facebook.com/tampastrides.