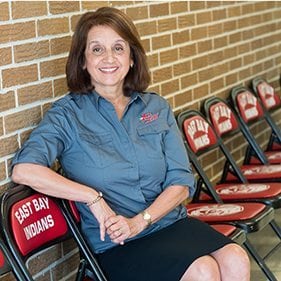 Maria Gsell didn’t start off in county administration; her first job with Hillsborough County School District was as secretary at Plant High School. That’s when she got the first vote of confidence that spurred her to return to college: when then principal, Dr. Jim Hamilton, told Gsell that she could “probably run this school.”

As the daughter of a migrant worker, Gsell was no stranger to hard work. Her father came from Mexico and worked the fields before joining the Air Force and being stationed in Burlington, Vermont. That’s where he met and married Gsell’s mother. One of the couple’s four sons and two daughters was Gsell. “We were a big, loud, happy family,” she says. She graduated from high school in Dover, Delaware, and married her husband, Gary, right after graduation. The couple followed Gsell’s parents to Tampa, and together raised a son and two daughters until, after 40 years of marriage, he passed away in 2013 after a lengthy illness.

Soon after Hamilton’s comment, Gsell decided to return to school. She graduated from Hillsborough Community College and earned both a bachelor’s and master’s degrees from The University of South Florida. She then taught English at Plant High School, became an assistant principal at Lennard High School, and has been the proud principal of East Bay High School for four years.

What do you think is the secret to your family’s success?
We don’t have a big secret! Like other families, we believe in each other and just a few important values: education, accepting people for what they are, unconditional love, and a lot of laughter.

What is your biggest fear?
Besides the frogs and lizards that insist on coming in my garage? Seriously, I think that it is that, somehow, I will fail to recognize a potentially harmful situation that may result in one of our students either becoming hurt or not receiving the appropriate support from those of us on the faculty or in the administration. Our teenagers are growing up in a very complex world. Multiple influences combine to affect their successful transition into the adult world. I am concerned each day that we model good behavior and decision making skills, as well as provide a safe and professional educational atmosphere.

What advice would you give to other women?
That sounds a bit presumptive, but I would ask that they recognize their strengths and the skills that they have developed as they have grown. I would suggest that they find people that encourage them and nurture them, and limit their exposure to those that don’t. Our environment is full of negative voices; associate yourself with positive women.

What is your proudest moment?
As a parent, seeing how my children have grown into happy, productive adults. Also, when I spend time with my grandchildren and watch them developing and learning. Professionally, becoming a principal was a personal moment of pride.

What is your biggest achievement?
I think that would be the combination of raising a family, having a successful marriage, and returning to complete my college education as an adult. Balancing the demands of those three important, and sometimes divergent, tasks helped me develop the same skills needed in my professional life: prioritizing, negotiation, time management, listening and a strong sense of humor.

What makes you happy?
Spending time with my family, going to the beach, travel, and watching the extraordinary talent at East Bay perform in athletics, music, drama, or many other activities. Just the other night, while eating out, one of my recent graduates came to the table to tell me how much he appreciated East Bay and how it prepared him for his future. That makes me very happy. That he was so affected by his experience that he would take time to tell me about it says that the efforts we make every day to make our school a positive force for kids is invaluable.

How do you relax and take time for yourself?
I like to sit on my couch or deck with a book; watch television shows I have recorded; listen to music. When I have the opportunity, I like to travel. I will be going to Costa Rica just after Christmas. Even though they have frogs there, I am going on a zip line canopy tour, horseback riding and river rafting.

What kind of message would you like to give women in the area?
It feels a bit presumptive to tell the women that read your magazine what I believe they should do or think. What I will say is that women can help each other by networking with and supporting the women in their personal contacts. We can be of great support since we have experienced similar life tracks and problems. I also believe that we should laugh more. Have fun with your work. Enjoy the moments. Life is not guaranteed. One thing I learned from the illness and loss of my husband, Gary, is that we can lose something important. Don’t miss the opportunities today; they may not be there again. Don’t be afraid to love or try something new. Life is what you do.

What else would you like to share?
Being a mom never ends. My children are grown and out on their own; there are grandchildren now. But, they still need my love, support, advice, and sometimes even my saying things that they don’t want to hear. My worry and thoughts about my children never goes away. They are always my kids. Both as a parent and as a principal, I have come to believe that life is about resilience: facing loss or failure without giving up. Being a success is less about whether you fail or lose something, than about how you get back up and face life as it is right now. The most important skill we can pass on to or families or students is resilience, because everyone falls down. The question is only how you get back up.

What is your biggest inspiration?
As I grew up, my parents were very important. They worked hard to provide a good life for all of us. We knew that we were loved. In the 3rd grade, Mrs. Wilson at Anderson Elementary School was a huge influence on how I viewed school. That continued in Delaware with Mr. Hilton in high school. When I was a secretary at Plant High School, Jim Hamilton, the principal, encouraged me to go back to school and told me that I could “run a school”. My husband Gary always supported me and encouraged me to do what made me happy. He was my best friend and biggest fan. My children also inspired me to model for them that lifelong learning is an important value.

Professionally, I am inspired every time I walk into a classroom and see a teacher in front of a class inspiring young minds. I am inspired by the administrative staff I have assembled over the past four years. Those men and women are tireless and recharge me daily. Every June as I shake the hands of the graduates, I am inspired.