“Family Goals” with Matt Gay of the Tampa Bay Buccaneers 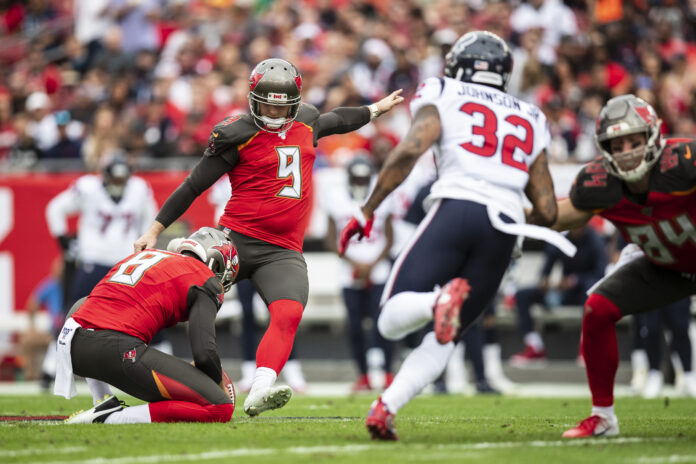 It’s hard to imagine a more eventful three years than the ones Tampa Bay Buccaneers kicker Matt Gay has had.

We connected with Gay, his wife, Millie, and their son Oliver via Zoom to chat about those major milestones, life under quarantine and his plans to go all the way to the Super Bowl with Tom Brady.

What has the first year of parenting been like for you?

Matt: Right now, parenting is just being there for him. Being nurturing, loving him, helping him along his way. The first year is also just being able to make sure that we’re on the same page as far as … what are we going to allow him to do or how we want him to be raised.

Millie: …figuring out sleep schedules and stuff like that. Just what’s important to both of us. Taking what we both love and making it our own.

What has been your biggest challenge during the quarantine?

Matt: I’m a routine kind of guy, and I can’t sit still for very long. So it sounds nice to be on the couch and watch TV, but I start going stir crazy. I need to be up and out doing things.

Millie: We’re lucky that we’re doing this with a baby who most of the time we can spend our time indoors and he’s playing with toys inside. He’s not at an age where he’s walking and just needs to be out doing stuff, so that’s been the good side of it.

Millie, what kind of father is Matt?

Millie: He was made for this role. Literally. He wanted a baby the second we got married. He’s just always wanted to be a dad. Oliver absolutely adores him. He’s really good about balancing his time. When he’s at work or when he’s training, he’s focused, but when he’s here, he’s 100% present. It’s been amazing to see that.

Do you change diapers, Matt?

Millie: He is really hands-on. He has been hands on from the minute he was born. He’ll change all the diapers in a day. He’s so amazing!

How has having a son changed your perspective on life?

Matt: Everything you do now is for him. I mean, if this little face doesn’t get you up going in the morning because you gotta provide a life for him, I don’t know what will. In my line of work, that’s what motivates me to get out of bed early, show up every single day, handle the tough situations because I gotta do it so that he can, and she can, have a life and I can provide a good life for them.

Have you pictured Oliver growing up and playing sports? Will you encourage him to play sports and to choose football?

Matt: Huge encouragement to play sports. I want to get him a ball now and let him develop that love for it. I grew up playing soccer. I only started playing football three years ago. Soccer has been my life’s passion, and so for me, I’m still super involved in soccer. It’s what I watch. So the first sport I’ll encourage him to play is soccer. I think it’s great for little kids. I think it’s a good environment for them to be in. But if he wants to play something else, whether that be football or he wants to play baseball or anything else… we’re going to support whatever he wants to play.

You just started playing football three years ago and now you’re in the NFL. How did that happen?

Matt: It’s kind of a crazy story and it’s a little bit of an anomaly. I kicked on the side in high school. My senior year the [football] coach would let me show up on Friday nights and just kick in games. But I would play soccer throughout the whole week. I went on to play two years of college soccer. And then soccer wasn’t going the way I hoped … so I said, ‘I’m going to try and kick.’ So I quit soccer and started pursuing that—got a try-out at a few different colleges. I ended up getting a walk-on offer at the University of Utah, then I won the job there, played two years and then ended up in the NFL.

Have you been able to train for this coming season yet?

Matt: I’ve been training for four months now. I’m kicking three times a week making sure my routine is up, because when this whole thing does end and we do get back together with the team, we’re gonna hit the ground running. So I think I need to be ready, I need to be in shape for really the season to start. It’s gonna be close. We’re not gonna have a lot of time to get prepped and get ready.

How did you feel when you heard Tom Brady was joining the team?

Matt: It was kind of a constant rise of emotions because it constantly built up in the media. It was like maybe the Bucs and then he narrows it down, and then it’s like, Ok, we’re maybe one of two teams he was gonna choose. And then all of a sudden it was like Tom Brady is signing in Tampa and you’re like, ‘holy cow, this is going to be my teammate!’ Arguably, the greatest of all time is going to be in the locker room with me and I’m going be able to learn from him and learn from his success. I think success is a mindset, and being able to pick his brain on how he did things throughout his career is gonna be important for me. He changes the culture. He changes the whole vibe of the team and also the city of Tampa. So you have to just make sure you’re extra sharp and extra on your game. Not that I wasn’t, but it dials you in a little bit more that he expects a lot.

Does it increase the pressure?

Have you pictured it— the Super Bowl in Tampa featuring the Tampa Bay Buccaneers?

Matt: Oh yeah, I wanna be the first team ever to play in the Super Bowl in their home city. I’ve pictured kicks in that game. I’ve played it in my mind.

So what would you say is more pressure— kicking a field goal on a big stage like that or being a father to a baby?

Matt: Being a father, definitely. When all is said and done, football is just a game. It’s a privilege to be able to play, but what really matters in life is the relationships we have, your family. You’re responsible for this little human to live, to grow up, to be raised properly, to be a good person and if he grows up and is a good boy and treats people with respect and is nice, that’s more important. Family trumps football every day of the week, even Sundays.