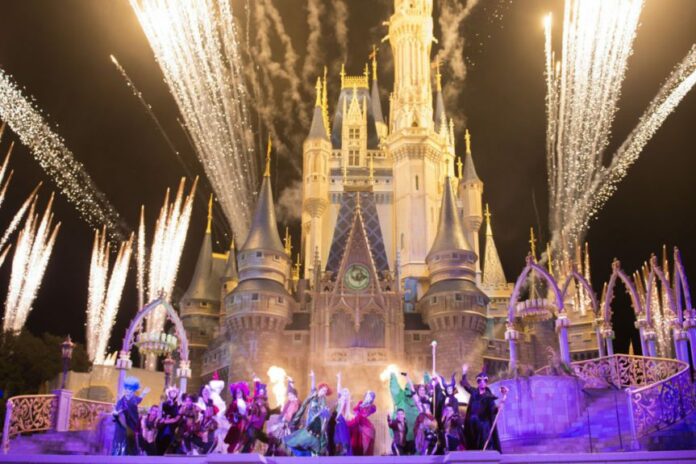 Mickey’s Not-So-Scary Halloween Party is a spooktacular way to celebrate Halloween whether you take the kids or not! (Yes, this TOTALLY qualifies as a parents night out!) We were recently invited by Walt Disney World to attend the event for a media preview, so disclaimer…we did not pay for our tickets, but our opinions are ours to share with you! We decided the best way to break down what you can expect is to share our 5 favorite things about the party!

We attended the Not-So-Scary party when our oldest son was much younger, so this was, in a way, a new experience for us now that he is almost 5. We admit, this can be an expensive trip when all is said and done, but it’s worth doing at least once with the kids, especially if you are big Disney fans like we are because Disney knows how to throw a ghoulishly good party!

The basics: Mickey’s Not So Scary Halloween Party is not included with regular admission to the park. It is a separate ticketed event hosted on select nights from August 25-November 1 from 7pm-midnight. Tickets for the Halloween Party start at $74 per person ages 10+ and $69 ages 3-9. The price goes up the closer it gets to Halloween. You can purchase your tickets here.

ONE: It’s not as crowded and no where near as hot.

Yes, it will be crowded but the number of people is not even close to what we usually encounter during some of our daytime visits. We’ve been annual passholders for several years, so we have plenty of visits under our belts. Just like a regular trip to the park, you’ll still want to plan out your night because there will be lines. There are no Fast Passes during the party, so pick a few rides you want to go on to leave plenty of time to enjoy the live entertainment and special characters (see below). Bonus–while Disney does not promote this, you can enter the park as early as 4:00pm with your Not-So-Scary ticket even though the party doesn’t get started until 7:00pm. There is a special entrance just for Mickey’s Not-So-Scary Party guests, so be on the look out as you approach the front gates.

Your inner tween is going to leap for joy when you experience “Hocus Pocus Villain Spelltacular” at the Cinderella Castle stage with the beloved Sanderson sisters and your favorite Disney villains! (This was one of my favorite movies as a kid, so I was personally super excited about this.) It’s such a fun show! Disney does not disappoint here.

The Headless Horseman leads the Boo-to-You Halloween Parade which is a scary good time featuring your child’s favorite Disney characters dressed up in their finest Halloween attire as they dance and parade with ghostly floats and friends!

And be sure to grab a spot near Cinderella’s Castle for the spellbinding Happy HalloWishes fireworks show starring popular Disney Villains like Cruella de Vil (101 Dalmations), Jafar (Aladdin), Maleficent (Sleeping Beauty), and Oogie Boogie (The Nightmare Before Christmas).

Your kids can also dance with Mike and Sully from Monters Inc during the Monstrous Scream-O-Ween Ball at the Rockettower Plaza Stage in Tomorrowland. We didn’t make it to this dance party, but will definitely give it a go next time!

There are 13 characters you’ll only see at Mickey’s Not-So-Scary Halloween Party! Two of the most popular are Jack Skellington and Sally from “The Nightmare Before Christmas” (they can be found near Pete’s Silly Side Show in Fantasyland). We spotted Cruella de Vil taking a few photos with her fans in Fantasyland, too!  You’ll see more characters exclusive to the party during  the Boo-to-You Halloween Parade like Big Al of the Country Bears, Captain Barbossa (Pirates of the Caribbean), Dr. Facilier (The Princess and the Frog), Oogie Boogie (The Nightmare Before Christmas), Shenzi, Banzai and Ed (the three hyenas from “The Lion King”) and…of course…three hitch-hiking ghosts from the Haunted Mansion. There are also numerous character spots throughout the park, so keep your camera ready!

FOUR: Candy, so much candy!

Other than the rides, this was probably our oldest child’s favorite part about the visit! There are 14 treat stations located throughout the park offering 40 different kinds of candy including Skittles, M&Ms, Milky Way and Snickers! Don’t be discouraged if you see a long line because the line moves quickly. We stopped at three treat stations which was more than enough for our two kiddos. If your child has a food allergy, be sure to get a teal trick-or-treat bag from a cast member when you arrive at the park or at one of the Allergy-Friendly Centers at Town Square Theater or Heritage House. Your child will receive a special teal token at each of the treat stations which they can later redeem at the Allergy-Friendly centers for a fun treat!

Fun Fact: 250 tons of candy will be handed out during this year’s 32 parties!!

Get dressed for the occasion! Not only are kids 13 and younger encouraged to dress up, but parents can even take part! We decided to go as our favorite Disney character, Mickey Mouse! We wore DIY costumes using regular shorts and t-shirts so the kids would be more comfortable…the husband, not so much, but he was a trooper to get dressed up! Read the costume guidelines before you go so there are no issues at the gate: read the guidelines here.

A lot of families dressed the part! We saw a family of dalmations, plenty of princesses and even some dads who dressed up as Prince Charming for their little girls! What ever you wear, make sure it’s comfortable.

There are so many photo opps located throughout the park. The one pictured above in front of Main Street was one of our favorites! It was a treat to see this ghostly picture in our PhotoPass folder on the Disney My Disney Experience app! They even sent a 14 second video clip with the hitch-hiking ghosts making their ghostly appearance at our side.