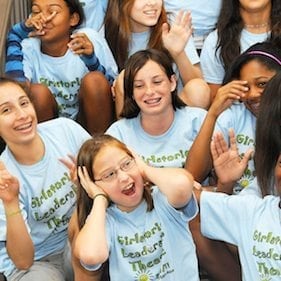 It happens every year! One minute you’re negotiating with your child about wearing a sweater to school and the next you’re debating about summer break! Will it be camp or grandparents’ house, home alone or a mishmash of day trips with friends? The texts fly. “How much did you say that camp was?” “No, it’s not the after-school rate! We’re paying for 8 hours of care, not 3!”

It’s a serious dilemma and working parents of middle school students can have it the worst! Their teen is absolutely, positively sure she does NOT need a babysitter! On the other hand, law enforcement officers are equally passionate againstleaving young teens home alone for 8-10 hours a day, week after week! What’s a working parent to do? Parents say they found the answer! (And not just for summer!)

“I cannot say enough good things about Powerstories Theatre,” says mom Michelle Benitez of the Girlstories Leadership Theatre Program at Powerstories. “It turned out to be a life-changing experience for Analisa and myself. She learned there is value in her own life experiences and to trust in herself.”

“There are a million up sides to teaching a young girl to believe and honor her strengths,” says Powerstories Founder Fran Powers. “My vision for Girlstories is to build a nation of girls that are confident, courageous, caring and compassionate.”

“When my husband and I look back, it’s hard to remember that shy little girl,” says Linda Beavers of her daughter Jessica. “She has replaced her doubt and fears with passion and dreams!”

If it sounds like more than a camp, that’s because it is!

Girlstories is for girls entering grade six, seven or eight. It’s a comprehensive theater arts program, with sessions at St. Peter Claver School in Tampa. The girls meet 9 a.m. to 5 p.m. Monday through Friday for 6 weeks. Then, August through December, the girls continue with mentoring at the Powerstories studio on Kennedy Boulevard and performances at local elementary schools. The cost per girl is $150 (thanks to several foundation grants which fund the balance). By the end of the seven-month program, parents say their daughters have learned about team work, time management, public speaking and self-confidence – just to name a few. It’s a Tampa treasure now in its seventh year!

Impressed yet? First Lady Michelle Obama is! So are the National Endowment for the Arts and The President’s Committee on the Arts & Humanities! In 2010, they honored Girlstories with the National Arts & Humanities Youth Program Award! Last year, mega star Josh Groban serenaded local participants in front of 12,000 concert fans!

Analisa Benitez was 11 when she joined Girlstories. “Truthfully, it was my mom’s idea, something fun for me to do over the summer. She figured I would make a few friends. I was so nervous. I didn’t know what I would do. The Girlstories process was something completely new for me. In such a short period of time, you write your very own true story, learn songs, as well as choreography,” explains the teen. “Once we got into the routine, I began to learn new things about myself. I realized that there were other girls just like me. I learned that I could be myself and that people would like me for me!” Mom Michelle says, “Soon after the start of the program, I noticed a change in Analisa’s self-confidence. She wasn’t afraid to be herself and like who she was.”

Jessica Beavers was 11 too when she joined. “I remember a time when I was this shy little girl before the summer of fifth grade. I remember my family would be at a restaurant and I was so shy my mom had to order for me,” Jessica explains. Girlstories changed that. “I could just be myself,” she says in her soft-spoken voice. “In my AP Human Geography class we learned that in a less-developed country it is important that a girl is educated. My teacher said, ‘If you educate a girl, you educate a nation.’ Girlstories doesn’t just educate girls how to act, sing or dance. It teaches you to believe in yourself. That each and every person has a voice that must be heard.” Jessica’s quiet strength comes shining through.

Jessica’s mom noticed a change right away. “After the first summer in the program, her grades and communication skills and leadership skills improved. By the end of the program, she had become a straight A student, became a leader in her class, and participated in more sports and community service projects.”

Analisa’s mom saw the same at her house. “Through this program, Analisa learned the gift of giving. She now intends to return this summer and be a mentor to the new girls. She also has mentors for life in Ms. Fran and Ms. Janice (Girlstories’ program director).

“I am finishing up my 10th year with Powerstories,” explains Janice Nepon-Sixt, who has been working with the girls since its early days as a workshop. “We encourage a variety of personality types to join. The more extroverted girls practice sharing the limelight, so to speak, and the more introverted girls learn to push themselves to communicate more openly. They all learn and practice speaking out loudly and proudly from day one of the program. One of our primary goals is creating a safe environment for girls to be able to express themselves comfortably. We encourage sisterhood that supports, praises and encourages each other. Having this haven gives the girls the strength to go into other environments more confidently. We teach self-esteem through theater.”

Each summer, there may be new faces but the transformations are the same — caterpillars to butterflies! “Numerous studies have demonstrated a correlation between drama involvement and academic achievement,” Powers explains. “Students involved in drama performance scored an average 65.5 points higher on the verbal component and 35.5 points higher in the math portion of the SAT,” she says. “In addition to having higher standardized test scores than their peers, students who participate in drama often experience improved reading comprehension, maintain better attendance records and, generally, stay more engaged in school than their non-arts counterparts.”

She stops to take a breath and then, with her trademark smile, says “It’s all so good!” Yes, it is.

Lissette Campos is the director of community affairs for ABC Action News.