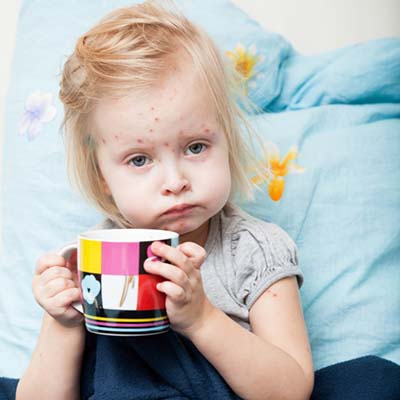 Outbreaks of measles are not a thing of the past. With recent outbreaks of this very contagious virus, like the one at Disney Land which affected more than 70 people, many parents are on edge about their kids and measles. Dr. Dale Bergamo, M.D., director of Pediatric Infectious Diseases at St. Joseph’s Children’s Hospital took some time to talk to us about the measles and to answer every parents burning question: how do we stop the measles and what is the likelihood that our children will catch it?

Q: What exactly is the measles and what causes them?

A: It is a respiratory disease caused by a virus, a virus that IS still around. It is highly contagious.

Q: What are symptoms of the measles?

A: Symptoms of measles primarily are fever, cough, conjunctivitis, cold like symptoms, and a rash that develops on the head and spreads out through the trunk and out to the extremities over a 3-4 day period and the whole disease lasts for about a week. It looks much different from chicken pox. Chicken pox are a vesicular rash or a blister like rash, the measles rash is more of a red macular rash. After the rash resolves, patients tend to have a brown discoloration and then they actually have a fine peeling afterwards.

Q: How do vaccinations prevent the measles?

Q: How is measles treated?

Q: Are kids who haven’t had the vaccine protected if all of their peers have had the vaccine? For example, if I don’t vaccinate my child, shouldn’t I not have to worry since everyone else is vaccinated?

A: That’s what they [parents] are counting on, but unfortunately when you look at the Disney Land outbreak and other outbreaks, the majority of those individuals are people who were not immunized– very few were immunized, some of them had one dose versus two, but if you are not immunized and you become exposed to measles you pretty much have a 100 percent chance that you are going to catch it. It is VERY contagious.

The vaccine is very effective.When it came out in the 1960’s there was a decrease in instances of measles by 99 plus percent in this country. Measles was one of the viruses that was scheduled for eradication. Small pox was eradicated , polio was scheduled for eradication in this century, and measles-since it is a human only disease- could be eradicated too if we vaccinated everyone like we did with small pox.

The problem is, individuals who choose not to be vaccinated due to false scientific reasons (because there is no real association with autism or other issues), or have other reasons why they don’t want to be vaccinated- those individuals are giving a foot hold to these viruses in the human population.

Q: Can measles lead to any complications in kids, especially young kids?

Q: How many cases of measles does St. Joseph’s Children’s Hospital typically see in a year?

A: Really none. The disease is really going to be spread within pockets of non-immunized individuals. Its within those populations that give them a foothold and it spreads, but I haven’t seen any cases of the measles here.