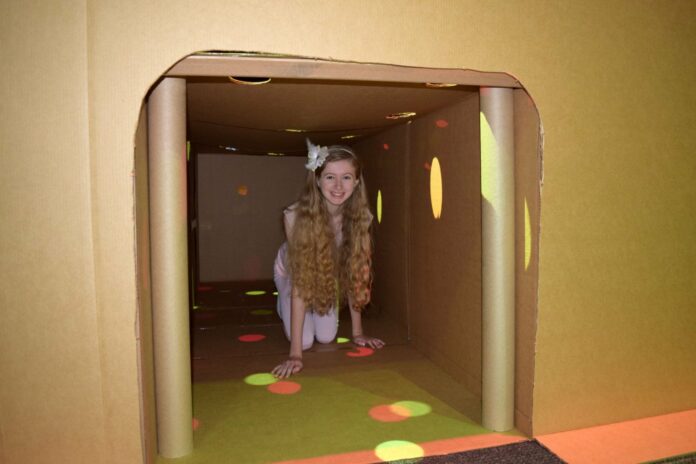 We’ve all seen our kids do it — and you probably remember doing it yourself when you were a kid, too.

They unwrap that shiny new gift from you — the one you spent hours searching for, the one that embodies your deep love for them, the one that cost more than you probably should have spent — and their eyes light up with joy… as they toss aside the present and start playing with the box!

There’s something about that simple cardboard box and its endless possibilities that makes it one of the world’s greatest toys. And don’t just take my word for it. The cardboard box has been inducted into the National Toy Hall of Fame! (Which is a thing that actually exists!)

Each year at MOSI, the Museum of Science & Industry in Tampa, our team sets out to create a giant summer experience that mixes fun with learning. And this year, cardboard was on our minds. “The MOSI design teams were busy brainstorming ideas, reminiscing on our childhoods and fondly thinking about imaginative play,” Johnny Scotello, MOSI’s Director of Exhibits explained to me.

“We started talking about how much fun we had with cardboard boxes — forts, castles, race cars, and so on. Then, nearly simultaneously, we all yelled, ‘Spaceships!’ We knew then and there the exhibit had to be Cardboard Space Adventures.”

Our team shaped that insight into a core concept: a child’s dream to turn a simple box into an amazing imaginary spaceship. “We understood that we had to take play out of the realm of iPads and phones and into the higher-level creative play of a child’s imagination,” Johnny said.

How can families team up? How can kids discover on their own? What will encourage everyone who visits MOSI this summer to dream big? We worked to create hands-on answers to those questions.

For months, we drafted designs and built models and prototypes, including the ones you see in the photos on this page. And with each draft… everything kept getting bigger.

Guests would start their quest with “one small step” through a human airlock or an alien portal, traveling to either a space station or a far-off planet. Then, families would work together to:

MOSI’s Director of Innovation, Anthony Pelaez, told me, “As an educator… I facilitated many cardboard adventures with kids. We built cardboard arcades, cardboard dinosaurs, and cardboard movie props.” But nobody had ever built a cardboard construction this big. Not just nobody at MOSI. Nobody anywhere.

Our plans had reached such a scale that, on a whim, Anthony and I searched for the Guinness World Record for the largest cardboard sculpture ever built. It turned out that, holy cow, yes, our exhibit would be big enough to shatter the record of the current Guinness record-holder, an 1,100-square-foot cardboard castle in Hong Kong. Sure, castles are cool — but space is much cooler. Literally, space is much cooler. It’s -455 degrees Fahrenheit out there.

With plans in hand, we got to work: cutting, building, and creating.

After months of development and an absolutely absurd amount of cardboard (thank you to our sponsors Piedmont National and Leggett & Platt for getting us started with truckloads of the stuff!), our enormous summer experience, Cardboard Space Adventures, opened at MOSI on Memorial Day weekend.

With no offense to any cardboard knights or dragons, my boys and I think it’s a whole lot cooler than a cardboard castle. And MOSI is keeping this particular part of space a comfortable 72 degrees Fahrenheit all summer long. The exhibit continues through August 13th, when we then plan to recycle all the cardboard.

Now that you know how this adventure began, please come visit — to explore our exhibit and explore where your own imagination can take you.