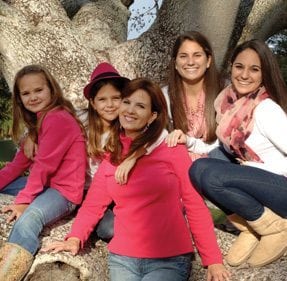 Every year many of us make New Years Resolutions.  We make an effort to do the things we know we should do to live better, smarter or longer.  We’ll pledge to loose weight.  Or stop smoking. Or maybe we promise to find a better job or pay off the credit card bill.

This year I’m only attempting to do one thing, spend more time with my kids, paying attention to all the little details I may have let slip by in years past.  Like the fact my baby, Jillian Rae, is now taller than most of the boys on her soccer team.  When did that happen?  And my fourth grader is asking me questions about body changes and relationships.  Can I sit down and take a deep breath?

I needed to slow down and appreciate the simple, special moments in life, like that first goal during a soccer game and the little red ribbon handed out for making the honor roll.

I was diagnosed with breast cancer in September 2011… and from that moment on my life blurred a little.  During those first weeks, in the midst of doctor appointments and medical tests, I struggled with when and how to tell my beautiful daughters that mommy was more than just a little sick.  I knew this would be difficult for two reasons.  First, I watched my mother die from breast cancer and the experience traumatized me even till this day.  I was away at the University of Georgia and didn’t even realize she’d been diagnosed with cancer until after her mastectomy.  She wanted to spare me the worry and concern but I remember being mad at her.  What if something had happened during her surgery and she had died?  I had wanted to be there for her, holding her hand and for a long time I resented her making that decision for me.

Secondly, a fourth grader at my daughter’s school had recently been diagnosed with cancer and had lost her hair due to chemotherapy.  The school was holding fundraisers and talking openly about the disease.  Both my girls were very concerned for their young friend and I could see cancer scared them.  Heck, it scared me.

Jorge, my husband and I decided we needed to wait until I could talk about my breast cancer without crying and falling apart.  That took literally about two weeks.  Then one night I was driving home late after a two hour talk with a local breast surgeon when Jorge texted me.  The two youngest kids knew something was up.  They were both scared.  We had to tell them that night, but he wanted us to be upbeat, positive and focus on the fact I had the cancer doctor’s could cure.  He asked, are you up for that?  I then understood my mother’s dilemma.  I would not lie but I would not tell them the whole raw truth either… for it is a mother’s intuition to protect her young from anything painful.

When I walked in, they were waiting for me in the kitchen.  I smiled first, and then told them we were all lucky because I had the good cancer, the kind that was caught early and the type surgery could cure.  While I know there is no 100 percent guarantee, doctors did tell me my cancer, somewhere between stage 0 and stage 1, would not kill me if I acted right away.  So I told the girls I would have surgery to remove both breasts.  Boy did that open the door to questions, details so personal it’s not appropriate to share here, but I did answer all their concerns and when that conversation was over I noticed not one of us had dissolved into uncontrollable tears.  We’d made it past the first step.  Together.

Next, we had to decide if the girls should be there at the hospital during my surgery.  I said no. My mother, in heaven, probably smiled at that one, right? Remember her decision to not tell me until her first surgery was over?  But in the end, neither of my girls wanted to be at school while the rest of the family waited for me in the hospital room, so we allowed them to come with us.  I will tell you this, when they rolled me into the room after this major surgery, I apparently looked so pale they thought I was dead and both started crying.  Jorge tells me I spoke to them, assuring them I was okay, but I don’t remember this.  So, did we make the right decision that day?  Don’t know.  But I did ask my older daughter if she wanted to be with me when I had my final surgery to place permanent implants.  She asked if I would be grey again.  I told her I might and she shook her head no.  I only share this with you moms so if you are faced with the same decision one day, you can reflect on this before making your decision.

My two girls had very different reactions to my recovery.  My eldest, who is 9, helped me blow dry my hair when I couldn’t reach up to touch my head.  She helped bathe me and brought me trays of food and drink.  My youngest, who is 8, wanted nothing to do with my scars or my struggles.  I think she wanted her perfectly healthy mommy back, and I don’t blame her.  That’s the mom I wanted to be.  But what I have learned is that each child is different and we should allow them to be themselves and deal with stress in their own way.

So, as we say hello to a New Year and goodbye to one of the most difficult years of my life, I thank God for all of my children.  And I promise to cherish each day we have together, holding hands and continuing this beautiful journey of life.